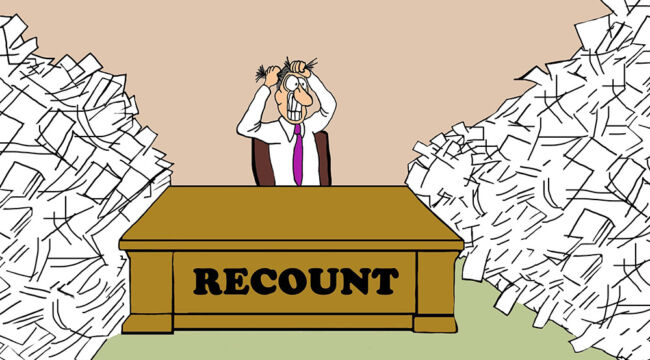 While the hologram known as Joe Biden dazzled a sparsely-filled House chamber Wednesday night with a plan to turn the USA into the Big Rock Candy Mountain, events were spinning out of control so fast elsewhere that Rachel Maddow’s head was revolving like the demon-possessed little girl in The Exorcist, spewing a pea soup stream of hysteria at her credulous audience.

What’s got her noggin in a twist?

An army of DC-based Lawfare attorneys attempted to quash the audit earlier in the week on the grounds that the vote had already been certified and that was that.

But Maricopa County Superior Court Judge Daniel Martin ruled otherwise, that it was the prerogative of the state Senate to authorize it, and the audit continues.

Democrats continue trying desperately to hit the pause button on the process. The venue, an old civic arena, is only rented until May 14, so physically disrupting the audit may be their only hope to stop it.

But let’s assume for now that the audit does continue. The real question is: what actually happens if the auditors come up with clear and conclusive evidence that the ballot count was wildly incorrect due to fraud?

Opening a Massive Can of Worms

Might the Arizona legislature have to de-certify the election results?

One big tamale is the U.S. Senate seat that former astronaut Mark Kelly, a Democrat, took from Republican Martha McSally, giving the Dems a 50 plus one (Kamala Harris) vote advantage. A one-seat swing in the Senate would kill Ol’ Joe’s agenda, right there.

Might Georgia, Pennsylvania, Wisconsin and Michigan also have to submit to audits? Will it take lawsuits to prompt the courts in those states to order it?

More importantly, would it shift public opinion further in the direction of cynicism and mistrust of the establishment — including their local officials and the news media?

The numbers are already pretty grim: 70% of Republicans and 30% of Democrats say they doubt the veracity of the 2020 election. If clear evidence emerges that there was massive, widespread election fraud that decided the election, would it lead to a constitutional crisis?

How would Joe Biden survive in office if a growing percentage of the public sees him as illegitimate? Would he step down so Kamala Harris would take his place?

Oh wait, if a president was illegitimately elected, then so was his vice president. Then what? The Speaker of the House is next in line. That means Nancy Pelosi. How many people want that to happen?

Would they have to reinstate Donald Trump? If you thought last summer’s riots were bad, imagine the riots then.

And what might happen if the establishment would attempt to blow the whole matter off? Can they still say “nothing to see” if the public has seen so much that they can’t unsee?

Elections Must Have Integrity

Now, I don’t know how the Arizona audit will turn out, one way or the other. The same is true for any potential audits in other states. I only hope the process settles the question of widespread fraud once and for all. Then the nation can move on.

But as Americans, regardless of party, we should all hope that no serious fraud is discovered.

You may or may not like the outcome of an election, but the vote must have integrity. We need to know the system is honest. If our guy won, great. If our guy lost, oh well. We’ll get ‘em next time.

If the people lose trust in elections, how does democracy survive? We’re off to banana republic land.

Election integrity aside, plenty of other events are roiling in the background with the potential to go critical.

No Heimlich Maneuver for a Nation Choking on Debt

Joe Biden’s proposals to jack the U.S. economy by $5-plus-trillion won’t be very good for the credibility of the U.S. dollar, with other countries already eager to dissociate themselves from dollar-based global trade payment arrangements.

But that’s just financial esoterica compared to what’s happening on-the-ground across America, with households running on debt and back payments for rent and mortgages piling up, and landlords and banks taking the hit in the meantime.

There’s no Heimlich maneuver for a nation choking on debt. And that plan to become the Big Rock Candy Mountain, where they hung the jerk who invented work, is liable to disappoint even the number-spinners in the Bureau of Labor Statistics.

Also, meanwhile, the U.S. continues to stupidly stir the pot in Ukraine, to provoke war over the breakaway Donbass region in order to give NATO a reason to exist.

The Russians don’t want or need to take responsibility for what has become a failed state. But Ukraine has been their buffer from European invasions for centuries and they won’t permit it to become a forward base-of-operations for NATO.

Does the USA actually have any real interests there — other than to justify the earnings of defense contractors? The Biden family is not even taking any more payments out of there (as far as we know).

When it comes to real geopolitical friction, look in the other direction, at China.

Not only is U.S. weakness vividly obvious to them, they are substantially responsible for it. The  Wuhan virus has pushed the disordered U.S. economy over a cliff, and then helped install their preferred guy in the oval office.

Among other stupidities, the USA allowed most of its advanced microchip manufacturing capacity to relocate in Taiwan. We can’t run anything here from cars and refrigerators to municipal water systems, and probably even our war weaponry, without continuous supply and resupply of these chips. Game this out.

Then there is the fantastically stupid agitation and provocation on the home-front of the antifa types, who are too dumb to even understand that if you want a police-state, you need police.

Rather, they want to live in chaos and anarchy, the Satanic version of the Big Rock Candy Mountain, where the looters play in the stores all day and the jails have gone away.

Joe Biden pimped for that hustle Wednesday night, too, declaring the nation systemically racist and “white supremacy” the nation’s greatest domestic menace. Oh really? Not our own Department of Justice, FBI, and the rest of the Intel Community?

Another Can of Worms

The FBI raid on Rudy Giuliani was an interesting development on that front. Biden’s attorney general, Merrick Garland, may have chosen the wrong guy to mess around with.

If the bozos in DOJ actually charge him with something, they might find themselves in a special hell of discovery — that is, discovery of conclusive evidence that the DOJ has become a criminal operation actively working against the public interest.

I daresay the truth is that just about everything the DOJ has done for the past five years involves the covering up of their own shenanigans, and a case against Mr. Giuliani could be just the wedge to open up public recognition of all that.

That would be a little bit of a problem when the people lose all faith that their public officials were elected fairly and honestly.

The bottom line is, there’s a lot to push through and sort out in the months ahead. We’re all on ship, leaderless and rudderless, heading into a summer maelstrom.

Let’s hope we can make it safely to shore.