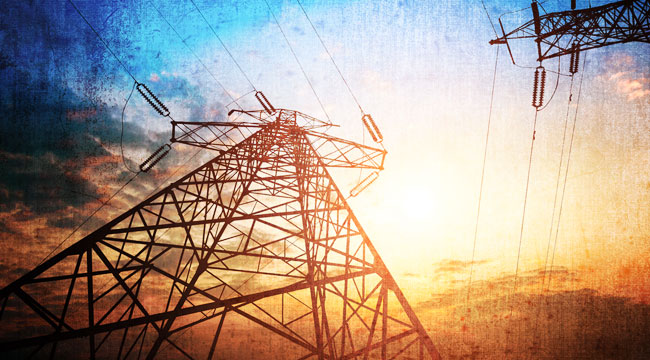 Are We Finally About to Solve This Power Problem?

Take the Human Genome Project, for example. Launched in 1990, its goal was to unravel the inner workings of the body’s estimated 25,000 genes. By knowing our exact genetic makeup, we can spot diseases earlier and develop better treatments to cure illnesses and prolong life.

Now scientists aim to map our brain’s complex web of 86 billion neural connections. This might help us discover why our conscious mind can solve problems at 100-150 mph, while our subconscious mind runs at close to 100,000 mph, according to Steven Kotler, director of research for the Flow Genome Project.

Life-changing stuff, for sure.

But can some scientists and tech experts please set their sights on a more pedestrian task? Like… oh, I don’t know… figuring out how to increase battery life?

Because, quite frankly, it sucks!

I mean, in this day and age of hotshot technology and fantastic innovations, is this really the best we can do with batteries?

You know what I’m talking about…

While the mobile revolution has given us a terrific amount of on-the-go computing ability, our trusty smartphones never seem to hold a charge long enough. And the dreaded “10% battery life” warning always seems to come at the worst times, too, leaving us scrambling for a place to recharge.

Cruise through any airport, for example, and you’ll see people prowling the terminal, searching for any available electrical outlet. 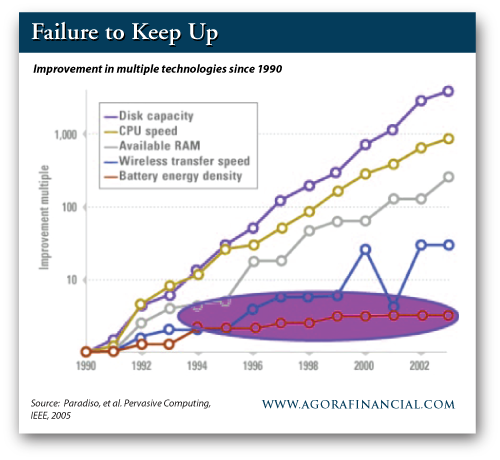 Suffice it to say, science has failed us here. So what gives?

In a nutshell, Moore’s law apparently doesn’t apply to battery technology. In other words, while computing processing power doubles every two years, battery storage capacity does not.

But if this trend doesn’t change — and fast — I can tell you one innovation that’s DOA — “smartwatches.”

A Smartwatch With a Stupid Battery

The world’s tech heavyweights are lining up to develop devices that will tap into the $60 billion-per-year watch market. The shortlist includes Apple (AAPL), Google (GOOG), Samsung, LG Electronics, Microsoft (MSFT) and Qualcomm (QCOM).

But there’s a problem…

Based on today’s battery efficiency, Quartz’s Christopher Mims says that smartwatches only promise about three-four days of battery life, given the energy-draining applications stuffed into them.

Now, if you’re a regular watch-wearer, that’s pretty darn annoying. I mean, there’s a reason why Timex opted for the slogan “Takes a licking and keeps on ticking” in the 1950s. People want a watch that works for a long time.

And if we have to plug in smartwatches all the time, the future sales potential promises to be challenging at best.

Get Ready to Unplug

We can circumvent the whole battery life problem with the introduction of “wireless power” or “wireless charging.”

As I’ve noted before, wireless power is a concept that scientists have worked on since Nikola Tesla pioneered a host of electrical innovations and devices in the late 1800s.

But nobody has achieved any significant breakthroughs.

However, I’m currently tracking a privately held company that’s working on a very promising solution to the battery life problem.

In fact, it wouldn’t even require plugging a mobile device (be it a tablet, phone or watch) into an electrical outlet to recharge.

Instead, the technology would seamlessly charge devices in its vicinity, much like a wireless router provides Internet access to any device within its range.

The company recently raised about $5 million in venture capital funding to help commercialize the product.

While I can’t tell you much more about the product at this stage, we’ll be tracking its progress — along with any other viable technologies. And I promise to report any key developments as they materialize.

Bottom line: There has to be a way to improve battery power. Or, alternatively, create technology that eliminates the problem of poor battery life.

Figuring it out can’t come soon enough. And when it happens, it promises to mint profits for the creators and investors alike.

Louis Basenese
for Tomorrow in Review