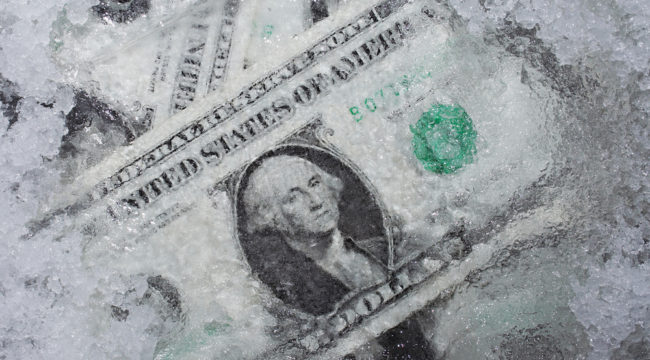 The Approaching Winter: The Super-Cycle Has Turned

How would you describe the social mood of the nation and world?

Would anti-Establishment, anti-status quo, and anti-globalization be a good start? How about choking on fast-rising debt? Would stagnant growth, stagnant wages be a fair description? Or how about rising wealth/income inequality? Wouldn’t rising disunity and political polarization be accurate?

These are all characteristics of the long-wave social-economic cycle that is entering the disintegrative (winter) phase. Souring social mood, loss of purchasing power, stagnating wages, rising inequality, devaluing currencies, rising debt, political polarization and elite disunity are all manifestations of this phase.

There is a template for global instability, one that has been repeated throughout history…

Historian Peter Turchin explores the historical cycles of social disintegration and integration in his new book Ages of Discord.

These combine to influence the broader social mood, which is characterized in eras of discord by fragmented loyalty to self-serving special interests (disintegration) and in eras of cooperation by a desire and willingness to cooperate and compromise for the good of the entire society (integration).

Rising discord can be quantified in a Political Stress Index. Do we find evidence of Turchin’s disintegrative forces in the present era?

Is it any wonder that political stress, however you want to measure it, is rising?

Cycles are the result of the interaction of complex dynamics, and so they are not entirely predictable in terms of pinpointing the exact moment of crisis or the outcome of a systemic crisis.

These long cycles parallel the cyclical analysis of David Hackett Fischer, whose masterwork The Great Wave: Price Revolutions and the Rhythm of History.

In Fischer’s well-documented view, there is a grand cycle of prices and wages which turn on the simple but profound law of supply and demand; all else is detail.

As a people prosper and multiply, the demand for goods like food and energy outstrips supply, causing eras of rising prices.

Long periods of stable prices (supply increases along with demand) beget rising wages and widespread prosperity. Once population and financial demand outstrip supply of food and energy — a situation often triggered by a series of catastrophically poor harvests — then the stability decays into instability as shortages develop and prices spike.

These junctures of great poverty, insecurity and unrest set the stage for wars, revolutions and pandemics.

It is remarkable that the very conditions so troubling us now were also present in the price rises of the 13th, 16th and 18th centuries.

Unfortunately, those cycles did not have Disney endings: the turmoil of the 13th century brought war and a series of plagues which killed 40% of Europe’s population; the 16th century’s era of rising prices tilled fertile ground for war, and the 18th century’s violent revolutions and resultant wars can be traced directly to the unrest caused by spiking prices.

(The very day that prices for bread reached their peak in Paris, an angry mob tore down the Bastille prison, launching the French Revolution.)

After a gloriously long run of stable prices in the 19th century — prices were essentially unchanged in Britain between 1820 and 1900 —the 20th century was one of steadily increasing prices.

Fischer challenges the notion that all inflation is monetary; the supply of money (gold and silver) rose spectacularly in the 19th century but prices barely budged. In a similar fashion, eras of rising prices have seen stable money supplies.

Monetary inflation can lead to hyper-inflation, of course, but there are always mitigating factors in those circumstances. Fischer argues the long wave is not one of hyper-inflation but of supply and demand imbalances undoing the social order.

Americans are inherently suspicious of anything which seems to threaten constraint of the American Dream; thus it is not surprising that cycles of history are largely unknown in the U.S. As Fischer explains:

This collective amnesia is partly the consequence of an attitude widely shared among decision-makers in America, that history is more or less irrelevant to the urgent problems before them.

Fischer notes that he describes not cycles but waves, which are more variable and less predictable. In response to this great rise in prices of essentials, both commoners and governments debased the currency.

In old days, this meant shaving the edges of coins, or debasing new coins with non-precious metals. The debasement was an attempt to increase money to counteract the rise in prices, but it failed (of course). Every few decades, a new undebased coinage was released, and then the cycle of debasement began anew.

But as inflation continued in the mid-13th century, money wages began to lag behind. By the late 13th and early 14th centuries real wages were dropping at a rapid rate. This growing gap between returns to labor and capital was typical of price-revolutions in modern history. So also was its social result: a rapid growth of inequality that appeared in the late stages of every long inflation.

And what happened to government expenditures? It’s deja vu all over again — deficits:

Yet another set of cultural responses to inflation created disparities of a different kind: fiscal imbalances between public income and expenditures. Governments fell deep into debt during the middle and later years of the 13th century.

In the late 13th century, the medieval price-revolution entered another stage, marked by growing instability. Prices rose and fell in wild swings of increasing amplitude. Inequality increased at a rapid rate. Public deficits surged ever higher. The economy of Western Europe became dangerously vulnerable to stresses it might have managed more easily in other eras.

It is hubris in the extreme to think we have somehow morphed into some new kind of humanity far different from those people who tore down the Bastille in a great frustrated rage at prices for energy and bread they could no longer afford.

It is foolish to blame “speculators” for the rise in food and energy, when the human population has doubled in 40 years and the consumption of energy and food has exploded as a result.

Based on the history painstakingly assembled by Fischer and Turchin we can thus anticipate:

— Ever higher prices for food, energy and water.

— Ever larger government deficits which end in bankruptcy/repudiation of debts/new issue of currency.

— Rising interest rates (until very recently this was considered “impossible”).

— Rising income inequality in favor of capital over labor.

— Continued debasement of the currency.

With this list of manifestations in hand, we can practically write the headlines for 2017-2025 in advance.