The Anything President And The Everything Bubble

The lemmings were running hard towards the cliffs yesterday. Despite a renewed burst of bombs and drones careening into the already rubble-strewn wastelands of Afghanistan, Yemen, Syria and Iraq.

Or the outbreak of cold war style nuclear brinksmanship on the Korean peninsula — what one commentator properly called a Cuban missile crisis in slow motion.

Likewise, forget that the vacationing Congress is set to return on April 25 to an endless sequence of shoutdowns, showdowns and shutdowns on continuing resolutions and debt ceiling increases.

That is, it will be struggling to keep the fiscal lights on in the Imperial City, not enacting the Donald’s DBA (dead before arrival) fantasy about making the American economy great again.

Indeed, while the Donald has been out huffing and puffing in his new role as global Spanker-in-Chief, the domestic front has turned from bad to worse. His economic policy machinery has now been seized entirely by the Vampire Squid’s latest chieftains in the White House — Gary Cohn, Steve Mnuchin and Jared Kushner.

I am quite confident that none of these three has ever voted Republican in their life or have even the foggiest idea of how to craft a fiscal plan and tax program that could coalesce the warring GOP factions from the hardline Freedom Caucus to the moderate Tuesday Group.

And if the Goldman trio should even attempt to go the old Boehner-Obama “bipartisan” route, as Wall Street devoutly wishes, Speaker Ryan will come to understand what it means to be drawn-and-quartered.

As I stated earlier, it should be crystal clear by now that there will be no great Trump Stimulus. And what lies ahead is an unprecedented outbreak of dysfunction, paralysis and unmitigated mayhem in the Imperial City.

Moreover, the fact that the Donald is now flipping, flopping, pivoting and whirling on issues in an almost random manner is surely compounding the dysfunction.

While the clucking commentariat at CNN may find the Donald’s betrayal of core campaign positions and constituencies to be evidence of a “refreshing” flexibility — or even as “presidential” — it is actually just the opposite.

It’s proof that the Donald didn’t mean a thing he said during the campaign.

And that for GOP politicians on Capitol Hill, lining-up behind a whirling dervish of impetuous unpredictability is fast becoming a career hazard with vanishing appeal.

After all, the Donald has now flip-flopped not on campaign brochure footnotes, but on five core issues:

China’s blatant currency manipulation over two decades, the Fed’s egregious bubble finance that left Flyover American behind, the Export-Import bank’s crony capitalist subsidies to Boeing and GE, NATO’s obsolescence and intervention on both sides of the Syrian civil war were all front and center to the Donald’s appeal.

Yet the fact that he jettisoned his clear positions on these issues in less than a week’s time indicates that he is truly flying by the seat of his ample britches, and that his attention span does indeed compress into 140 characters or less.

Yet, when the bell rung yesterday afternoon, the S&P 500 index was still up an unjustified 12% since November 8. So I will say it again with renewed emphasis: This century’s third great bubble’s days are numbered and in just a few digits.

The remaining bullishness and buy-the-dips robo-trading that temporarily sustained the dotcom bubble through March 2000 and the housing bubble through September 2008 will soon give way.

That’s especially true because the Fed is out of dry powder, and is raising interest rates and preparing to shrink its massive balance sheet in order to prepare for the next recession.

Given that the global economy languishes under $225 trillion of debt and massive excess capacity, the stock market is surely in the midst of the “Everything Bubble.”

As I stated above, the median stock is now trading at the highest multiple of earnings in history — including 2000 and 1929.

To top it all off, the state of American retail is indeed perilous.

With the recent chapter 11 filing by Payless shoes, it now appears that upwards of 3,500 stores will close in early 2017 alone.

Even the Bureau of Labor Statistics’ fudge factory seems to be getting the word about the scorched earth condition of the malls.

During the last two months, it has reported a 60,000 decline in the seasonally maladjusted job count; and a 758,000 drop in the actual count since the December holiday peak. By the way, that compares to only a 644,000 drop over December-March during the prior year. 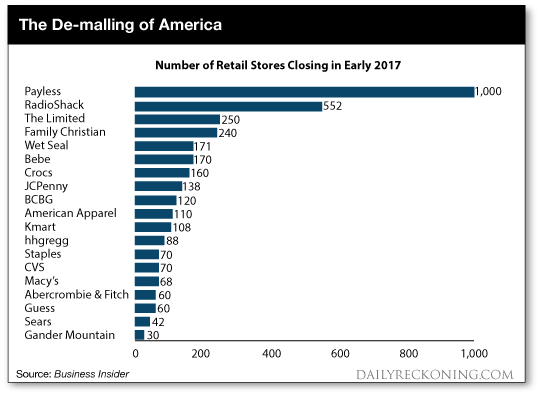 The fact is, other than easy credit-fueled auto sales, which are now also rolling over, and purchases through Amazon’s cut rate e-Commerce juggernaut, the American consumer has been quasi-comatose for nearly three years now.

Reported sales at general merchandise stores in February were no higher than they were 30 months ago in August 2014 — and I do mean “nominal” sales. Since the Consumer Price Index (CPI) is up 2.8% during the last year alone, inflation adjusted sales are actually already well into recession territory.

More importantly, the plunge in department store sales — which comprise the anchor and driver of 70% of mall traffic — have not abated in the slightest. As of the most recent reading, the monthly sales rate was down 30% from the pre-crisis peak.

Again, that’s in nominal dollars. In real terms, department store sales have fall by upwards of 50% since the early years of this century.

Moreover, debt-encumbered American consumers are dropping, not shopping, because this entire so-called recovery has been wasted. That is, consumers can’t spend energetically because there has been no significant deleveraging since the 2008 crisis.

Despite all the Fed’s madcap money-printing, they are impaled on Peak Debt.

In a word, the retail mall sector is facing insuperable headwinds and the worst of both worlds. That is, flagging demand and immense over-capacity.

It now appears, in fact, that nearly 150 million of retail square footage could close during 2017 — an all-time record.

Does the foregoing paint a picture of economic health? Hardly. Quite the contrary, in fact.

So contrary to what the Wall Street stimulus junkies would have you think, the U.S. and global economies are hardly “accelerating.”

Of course, they have been preaching the same gospel since 2013. But this time, reality will come breaking in and finally shatter the delusion.

The U.S. economy is sliding toward recession. And with the Imperial City impossibly gridlocked, the chances that the “stimulus” baton will be handed off to some ballyhooed Trump Reflation are lower than those of the proverbial snowball in the hot place.

Which leads me to my sincerest piece of advice: get out of the casino before it’s too late.