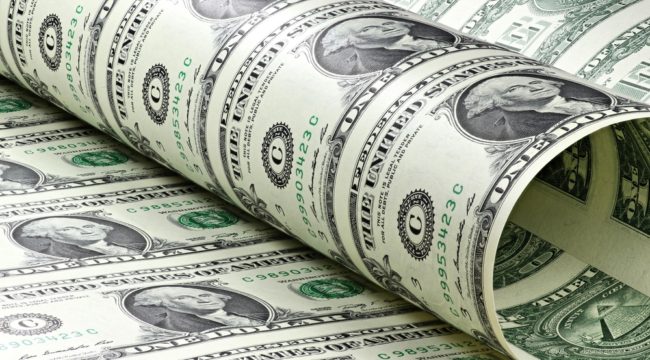 Another Bat**** Crazy Move From the Fed

Look, up in the sky!

Janet Yellen in a helicopter with bags of cash.

No kidding. That’s the Fed’s plan when the next recession hits.

The Fed’s Dear Leader coming to the rescue with air drops of free cash for everyone.

What could possibly go wrong?

Abnormal Is the Norm

At a press conference last Wednesday, Federal Reserve Chairwoman Yellen admitted that the Fed would consider using “helicopter money” in an extreme downturn.

It’s a phrase used to describe when governments print massive sums of money and then “drop” them on the economy… hoping for the best.

But they’re just trying to help by “stimulating” the economy… or what you could call their “Friends and Family Plan.”

But doesn’t economic growth come from savings and investment? ”Shut up and eat your gruel, Covel. You should be so lucky to have a Fed chief that’s a doppelganger in words and dress for the esteemed leader of North Korea.”

This all means that today, you can supposedly create real economic growth right out of thin air. Just print the money and start giving it away for free.

It’s fake money of course, but we pretend it’s real. See how easy it is to hoodwink the masses?

To comfort the proletariat, Yellen said that “helicopter money” would only happen in “abnormal” circumstances.

Kind of like the “abnormal” zero interest rates (soon to be negative) that we’ve had for an “abnormally” six-plus years. Abnormal is clearly the norm now.

In other words, count on it. Helicopter money is coming the moment the S&P 500 takes a downturn of any note.

How the Hell Did We Get Here?

Ever since the dotcom bubble, the Fed and other central banks have tried to force banks to lend more to spur economic growth coming out of financial crises.

What if the growth is fake or unsustainable? No matter. Pay for it another decade.

They started with zero interest rate policy (ZIRP). But that money hasn’t gone out into the real economy. It’s remained with the banks.

And what a great deal for them! They borrow for zero then use the cash to make billions scalping every day using high-frequency trading.

The thinking goes that NIRP would surely force people to borrow, spend and buy those Timbuktu condos instead of paying interest on their savings.

Think about how crazy all this is. Force average citizens to choose between paying interest on their savings or investing in casino investments engineered by the central banks to collapse at any moment.

But none of this is working–whatever the hell “working” means to people like Yellen.

Savings rates in NIRP countries are actually going up. And in Japan, fearful citizens have started hoarding cash. The Japanese are buying safes in record numbers? You bet.

So what do you think people will do when Yellen makes like Santa Claus and starts handing out free money?

Do you think that will instill confidence in consumers to spend more as opposed to saving for what they instinctively know is a coming meltdown?

Do you think the Fed’s actions will encourage companies to make additional capital investments in their businesses instead of hunkering down for the collapse they also know is coming?

“Helicopter money” is the Fed signaling to the world: “Yeah, we’ve lost control. We have no idea what the hell we’re doing.”

Since the financial crisis in 2009, central banks have printed $12.3 trillion of money and made 654 interest rate cuts to support the global economy.

What do we have to show for it?

Well, it’s obviously been great for Wall Street billionaires and stock indexes. But the rest of the experiment has been a huge bust.

It’s devastated those who rely on interest income for survival. Plus, we now have $200 trillion in worldwide debt, asset bubbles galore and stagnant global economic growth.

Usually, when the sink is overflowing, smart people turn off the faucet. But the Fed is looking to increase the water flow.

And if the Fed doesn’t come up with a new scheme to artificially goose the economy after NIRP failure, what’s the alternative?

A massive deleveraging of credit, a stock market collapse and a prolonged recession.

A clearing out of the excesses of the business cycle used to be normal.

But do you think Yellen & Co. are going to let “normal” happen on their watch?

As soon as the U.S. economy slips into recession, it’s only a matter of time before the debasement of paper money will continue unabated.

And more people will be looking for the safety of gold as they have in recent months.

That’s just fine by me. Gold surged to a three-year high last week. And my Trend Following subscribers have been riding the trend higher with it.

We’re up more than 42% on our Barrick Gold trade… and that trend shows no signs of reversing yet.

And that’s the beauty of trend following. We’re not making investing decisions based on what some central banker may or may not do next. We can’t predict any of that.

But we’re still able to identify trends and make money by riding them in whichever direction they go for profit.

I don’t prefer chaos. But if it’s going to happen, we’re ready to thrive, not merely survive. You should be ready too… long before you hear the sound of helicopters in the sky.

Please send me your comments to coveluncensored@agorafinancial.com. Let me know what you think of the Fed’s latest scheme.

Here’s Why You Should Never Buy and Hold Gold

Michael Covel spills the beans on the most ignorant investment strategy in the world. Read on…