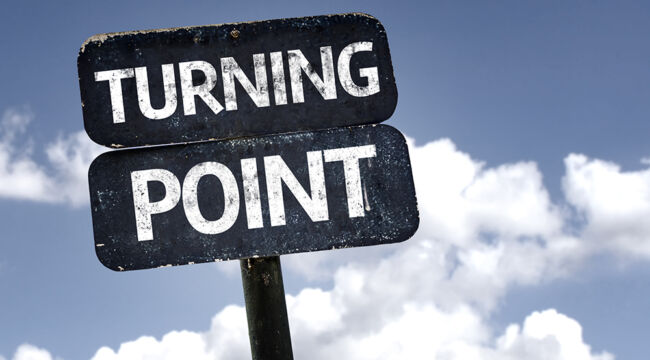 Fact #1: Reams of stocks have been trading at 52-week highs.

Fact #2: Reams of stocks have been trading at 52-week lows.

Not since 1984 — the year not the book — has the stock market manifested such violent schizophrenia.

[We recently saw] the biggest split in almost 40 years. There were so many stocks hitting 52-week highs AND 52-week lows on both the NYSE and Nasdaq that it registered the 2nd most extreme reading since 1984.

Thus we find the stock market a riot of warring signals…

A traffic light flashing red and green both. A road sign arrowing in opposing directions. A compass giving north and south indications.

In brief, a market convulsed by schizophrenic fevers.

Mr. Larry McDonald, he of The Bear Traps Report, gulps, “we are sitting on an incredibly important turning point.”

Which way will its mood swing next? To despair… or rapture?

History’s answer, anon. First, a look in on the psychiatric ward…

The Dow Jones gave back 127 points today. And so a winning, seven-day run ends… as must all things good.

The S&P lost six points while the Nasdaq managed to wring an 11-point gain.

Why were markets in heavier spirits today?

The Federal Reserve is currently huddled in conference. Investors fear it might wire the wrong message tomorrow. CNBC:

There’s growing concern among investors that interest rates may continue to climb, snuffing out the comeback for equities. The market fell to its session lows when the benchmark 10-year Treasury yield briefly rose above 1.62% in afternoon trading.

Again, which way will the market mood swing next — to despair — or rapture?

Here is the argument for despair, as CNBC suggests: Interest rates are on the jump.

The bellwether 10-year Treasury note presently yields 1.62%. A slender offering by history’s standard, it is true.

But the same 10-year Treasury note yielded 0.91% to open the year. Thus we have witnessed an increase of 71 basis points in 2.5 months.

As Mr. Louis Gave, CEO of Gavekal Research, reminds us…

A 50-basis point increase in interest rates approximates the annual budget of the United States Navy.

At $160 billion, the annual budget of the United States Navy is not… insignificant.

The added debt service costs from a 71-basis point rise are even less so. Mr. Gave:

They will have to decide whether to let bond yields rise or not. If they let them normalize to pre-Covid levels, 10-year Treasury yields would have to rise to about 2.5%. But if they do that, the funding of the government becomes problematic… The U.S. is already borrowing money to pay its interest today. If rates go up, they’re getting into the cycle where they have to borrow more just to be able to pay interest, which is not a good position.

Yet the true earthquake — the “big one” — remains a future catastrophe.

The stock market and the economy have risen upon a San Andreas Fault of artificially low interest rates.

Markets sense that inflationary forces, long dormant, are mounting. They have the dynamism of $1.9 trillion in “stimulus” in back of them.

If rates rise much above 2%, some believe the plates will slip… and fantastic seismic energies will unleash the “big one.”

The market would go rolling into the ocean. And the economy likely with it.

Others believe rates must rise to 3% or higher before the plates give way. No one knows the precise figure, of course.

But beyond all questioning:

This architectural atrocity stretches thousands of feet into the sky — but only inches into the earth.

That is, it is all high-rise and no foundation. It is all height and no depth.

The thing would come heaping down if rates rise markedly… as the earth shakes ferociously beneath it.

Thus is the peril of building upon a deeply unstable fault line.

But the Federal Reserve keeps piling one story upon the other…

Chief architect Jerome Powell insists the foundations are secure. Inflation is no menace because unemployment remains elevated, and the economy runs at diminished capacity.

Only when unemployment returns to pre-pandemic depths… and inflation runs persistently at 2%… will he turn his attentions to the ground beneath him.

After all, the fellow reasons, inflation has been dormant for decades. Interest rates have dropped across the same space.

The trendlines remain fixed in a solid position.

What if he does attain his 2% inflation? He believes he can allow inflation to run “hot” for a stretch. He can dial down the temperature again if sweat begins to drip.

Is the 40-Year Cycle Ending?

The cycle is reversing, he claims. Both inflation and interest rates are heading the other way:

We believe 2020 likely marked a secular low point for inflation and interest rates due to a reversal of deflationary secular factors, fiscal excess, and an explosive cyclical reopening of the global economy creating excess demand for goods, services and labor.

Market history has witnessed eight major cycles dating to 1871. Investors grabbed the greatest gains — nearly all of them — in four cycles of the eight.

Investors handed over their gains in the others, robbed by the silent thief of inflation.

A Decade of Losses

What if Mr. Hartnett is correct? What if the 40-year cycle of declining inflation and declining interest rates is ending?

What if both are streaking higher?

It would suggest rough going for stocks during the coming years… as the cycle swings from disinflation… to inflation.

At present valuations, stocks could shed 50% or more of last decade’s gains.

By some estimates, your odds of losing money in the stock market approach 100% — odds that make the bravest fellow quail.

This time is different, say Wall Street’s drummers. Of course. It always is.