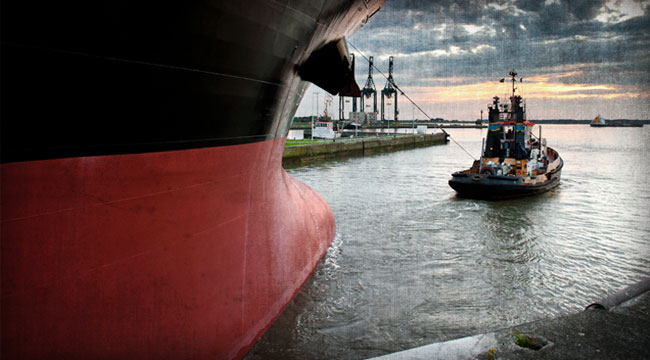 America’s shale boom rages on — and we’ve got the exports to prove it.

However, from the outside looking in — with the Keystone pipeline approval in limbo, natural gas exports slow to come online and a U.S. ban on raw crude exports — you’d think the U.S. isn’t exporting much in the way of energy these days.

But if you think the U.S. energy export scene is waiting for a government approval, you better have a look at this chart… 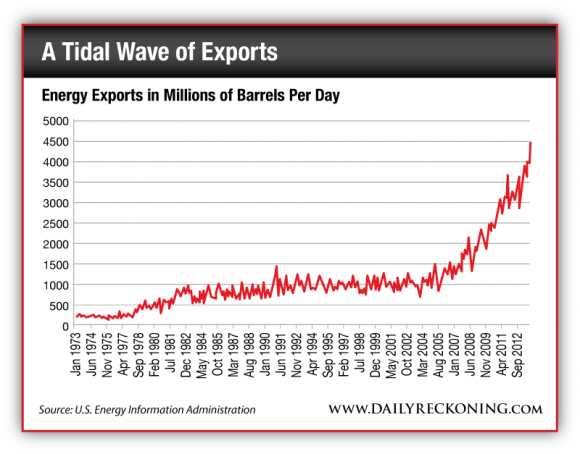 Since 2007, U.S. energy exports (shown above) have been booming!

The U.S. is exporting the equivalent of nearly 4.5 million barrels per day. At a low-ball estimate that these refined products command $50 a barrel, that represents over $82 billion in exports per year.

But that’s only half the story!

Since January 2007, U.S. imports of crude oil and petroleum products are down 4.2 million barrels per day.

Add it all up and over the past seven years, the U.S. is up nearly 8 million barrels per day, net. That’s an enormous turnaround — to the tune of $146 billion a day! Talk about a shale stimulus plan!

It’s America’s secret export boom. And while the talking heads and naysayers continue to pooh-pooh America’s outlook, a boom like this will add steam to our economic recovery and create even more opportunity for the energy names in our portfolio.

Last month in our resource newsletter, Outstanding Investments, I penned the “5 Hot Buys” section. There I discussed the difficulty of predicting the future. “We can connect dots, plan and forecast,” I wrote. But “there’s no telling what the economy will do,” I concluded.

Of course, last month, there were many dots to connect around Ukraine — a country in turmoil, with riots in the streets. Few envisioned the government of Ukraine simply collapsing. And did anyone foresee the country’s pathetic president high-tailing it from his opulent palace to exile in Russia? It’s bizarre and tragic.

Now Ukraine is under new management, after a fashion. Plus, for all we know, Ukraine is splitting up along ethnic lines — Ukrainian versus ethnic Russian, with Russian Federation military forces nearby, preparing to pounce. Indeed, it reminds me of an old Russian saying, “Russians take their time to saddle up, but then they ride fast.”

Why bring up Ukraine and Russia in an article about resources — particularly oil? Because we have a full-blown geopolitical crisis on our hands, and that affects you as a resource investor.

In terms of front lines and boots on the ground, the lineup is faraway Russia versus faraway Ukraine. But the European Union (EU) and U.S. are deeply engaged as well, in political commitment and strategic credibility. Now, after years of peace and relative stability in Europe, we have a new version of the old Cold War confrontation. Overall, this isn’t good for economic growth, growing trade and/or improved investment.

Looking ahead, how will the Ukraine showdown resolve? Perhaps sane heads will sit down and work out a deal. I hope so. Then again, Ukraine might fall apart, in many senses of the word. The Russian “Anschluss” of Crimea, to use a famous old German term, is all but finalized. And maybe we’ll see worse, Ukraine might break up along the lines of, say, Yugoslavia in the 1990s. Even worse, one has to wonder if Ukraine is the next Syria.

Again, what does this have to do with “hot” resource buys? Well, first, don’t expect central banks in Europe or the U.S. to tighten the money spigots. Interest rates will likely stay low, and monetary “easing” will continue. That is, it’s bad enough that Western leaders have to figure out how to deal with Russia and its ambitions toward Ukraine. There’s no sense for central banks to add an economic slowdown to the mix of issues.

I’ve said this again and again… but you must own physical precious metals.

Meanwhile, EU governments and the U.S. must bite the bullet (so to speak) and beef up defense budgets. No one can undo the past with respect to Ukraine. And Ukraine’s future will unfold in its own way, whatever that may be. But looking ahead, expect Western governments to revisit spending priorities for new aircraft, submarines and much more. It’s going to be expensive.

My investment point is that in times of political uncertainty like this, bet on inflation. For all the problems, there’s looming support for precious metals and strong hard assets like energy plays.

I’ve said this again and again here in The Daily Reckoning and other forums, but you must own physical precious metals. If you don’t own precious metal, or if you don’t own very much (say, 5-10% of your portfolio), then use the current price environment to acquire gold and silver. Buy real metal and take delivery!

Gold and silver prices strengthened in the first part of 2014, after being in the dumps for about 18 months. Looking back, precious metal prices topped out in 2011 and 2012 and then started drifting down. There may still be a downside for precious metal prices from here too, but I don’t envision a crash or prices staying down for long.

When it comes to the Russia-Ukraine standoff and how it will impact the EU and U.S., we’re still in the early innings. This will drag out over time. There’s much uncertainty for everyone on every side. Many wheels have yet to turn. One never knows what the morning headlines will bring.

The Internet is filled with links for all manner of companies that will gladly sell you gold and silver coins, ingots, etc. Shop around to get the best deal on the lowest markups and good service. And did I mention this?: Take! Delivery!