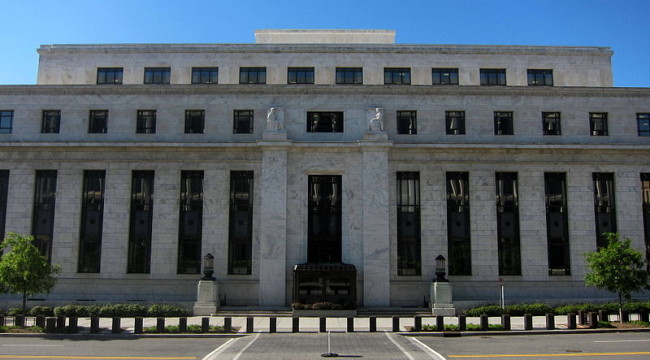 America's Ruling Classes: No Fear, No Caution, No Prudence

America’s smug ruling classes are supremely confident: they feel no fear, no caution, and exhibit no prudence.

The Deep State is confident that its Imperial toady Hillary Clinton will win the election, beating the Upstart Crow, paving a smooth path to unhindered Imperial entanglements around the world. Hillary never saw an Imperial entanglement she didn’t like, and her track record of abysmal failure doesn’t faze her.

The Obama Administration, from the president on down, are confident their thin legacy will remain untarnished, and will provide them a cash-out in the tens of millions in book advances, speaking fees, and all the other rewards that flow to those who served the Financial Oligarchy and the Deep State.

The Financial Oligarchy is also supremely confident. Obama’s complete surrender to the Oligarchy in 2009 enabled a vast expansion of their wealth and power, and Goldman Sachs Hillary stands ready to do her masters’ bidding.

The New Nobility (everyone between the .001% and the .05%) is also confident that the Federal Reserve will continue inflating their private wealth by whatever means are necessary–up to and including expropriation of middle class savings via zero interest rate policy and other financial tyranny.

The Upper Caste of technocrats that have skimmed billions in government contracts and stock options in Silicon Valley’s Unicorn era are also supremely confident: thanks to the Federal Reserve, they can borrow money for essentially zero interest and use the free money to buy back millions of shares, boosting their own private wealth immensely.

The flim-flam of “innovation” will continue to sell their shares and their gadgets, and their dominance of New Media guarantees they have a lock on the devilishly effective soma of distraction, social media, mindless mobile gaming, etc. that persuades the debt-serf masses that they love their servitude.

The State Nomenklatura is also smugly confident that their privileged spot at the bloated Federal trough of trillions is guaranteed: wealthy lobbyists are buying multi-million dollar McMansions in the cultural wastelands of Northern Virginia (the gaudy ugliness of the homes matching the pretensions of the Nomenklatura), contractors are billing taxpayers billions for questionable services to the National Security State, and public union employees are confident that the Federal government will bail out their unaffordable pension and benefits plans once their local Democratic machines have stripmined the taxpayers and bankrupted what’s left of the local government.

This is hubris on an unimaginable scale. If there was any karmic justice in this Universe, all these classes would be ground into the dust of an era that they thought would last forever–an era doomed by their smug confidence that nothing could ever threaten their privileges, wealth and power.

Here’s an interesting chart (courtesy of mdbriefing.com) of financial profits as a percentage of GDP and the ratio of debt to GDP. In the virtuous cycle of rapidly expanding financialization/credit, expanding debt pushes growth as measured by GDP (a misleading measure, but that’s another story).

The cycle has reversed and is now unvirtuous: more debt is not pushing GDP higher, hence the declining ratio. Adding debt is not generating growth. Diminishing returns have grabbed the parasitic, predatory monster of financialization by its surprisingly vulnerable neck.

Meanwhile, financial profits are cratering. Wait, how could this be happening? Where’s the Federal Reserve? Wave your wands, do some more magic! 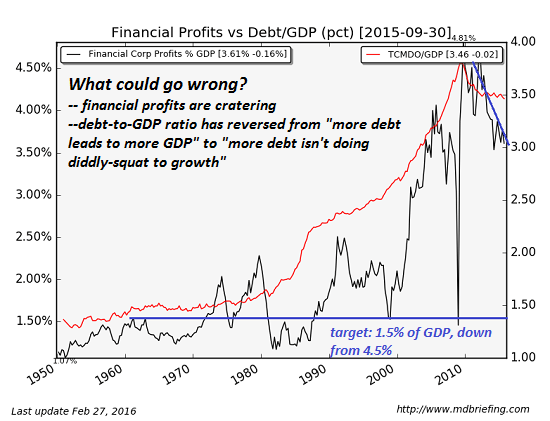 Could it be that America’s ruling classes, its Imperial state and the Federal Reserve, no longer rule their own destiny? Could their smug confidence be their undoing?

Only two things could upset the ruling class apple cart: a financial crash that the Fed can’t stop, much less reverse, and Donald Trump winning the presidency.