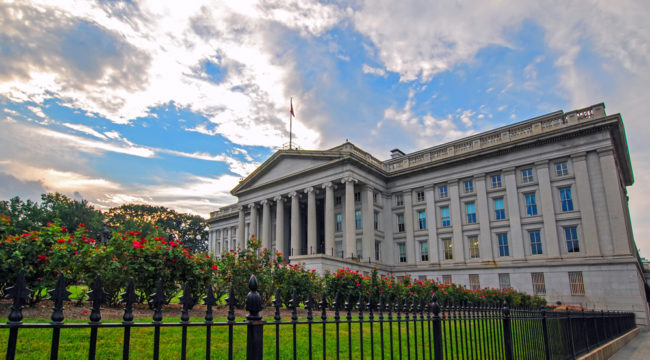 Saturday last we offended the pieties.

We reckoned that democracies — being shortsighted — tend toward vast accumulations of debt.

In response, reader Tom B. dealt with us as follows:

The committed ignorance of pseudointellectual arrogance and their refusal to take an economics class on the uses of the FIAT dollar is stunning! It’s the reason Warren Buffet [sic] smiles every time “financial experts” demagogue debt!

It is with high honor that we accept Tom’s congratulations.

True consistency is a rare feat in this world… even if consistently ignorant.

Thus we wear the garland proudly and — if you’ll forgive the expression — we are in our reader’s debt.

Of course, we do not question the utility of the fiat dollar… or of debt.

As our co-founders Bill Bonner and Addison Wiggin argued in their best-selling Empire of Debt, the United States built an entire empire upon it.

Only a debt-backed system of fiat money could finance the great wars, the great social improvements… and the greater economic booms.

Fiat money was made for public service.

It is civic-minded. It has a heart. It does what it’s told.

Whatever war, whatever boondoggle, whatever swindle it is ordered to get behind… it will get behind.

“Whatever you need, I’m here for you,” it seems to say.

And fiat money willingly sacrifices its value for the greater good.

The dollar has lost some 80% of its value since Nixon severed its final linkage to gold.

Gold, conversely… is as public-minded as a cat.

The greater good is beyond its care. It lacks all human compassion. It moves at its own leisurely pace.

And it is remarkably unsuited for war.

“You go over there,” gold tells the fiat dollar. “I’ll stay here.”

And unlike its self-sacrificial fiat counterpart… gold guards its value with vengeance.

Its limited quantity, therefore, forms a natural brake upon credit.

And as the right-thinkers tell us, credit must continually expand to “grease the wheels of industry.”

Nor do we laugh, nor applaud.

Or do much of anything else.

We simply watch — stupefied — and wonder.

We wonder, for example, how much more debt the American Republic can absorb before the entire business turns sour.

The national debt has nearly doubled since 2010. It presently rises above $21 trillion.

Total U.S. public and private debt runs to some $68 trillion.

Alas… it has not: 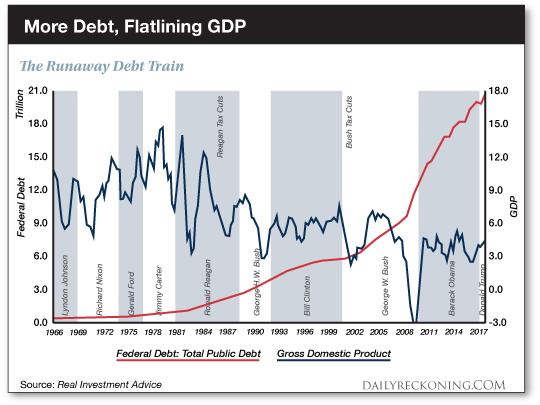 Real U.S. GDP growth has averaged 2.16% since the end of the Great Recession — far beneath the typical 4.3% post-recession average since WWII.

A dollar of debt just doesn’t do the duty it once did… when debt was but a trifle.

Assume, if you can somehow, an economy unburdened by crushing debt.

In this economy the miracle multiplier of debt could make a case for itself.

One dollar of debt might transform the cup of water into the quart of wine.

But the debt begins to mount… and each new drop of water yields less and less wine.

Ultimately comes the point when water not only yields no wine… it actually starts turning the whole business to vinegar.

Economists Carmen Reinhart and Kenneth Rogoff have shown that annual economic growth falls 2% per year when the debt-to-GDP reaches 60%.

Debt no longer lifts… but drags.

This is, when did the wine start turning to vinegar?

In 2010, it appears… shortly after the great turning point.

After 2008, argues financial advisory firm Baker & Co., “something in our economy broke.”

Before 2008, what they term “actual” GDP had always risen alongside the rising debt — whether because of it — or in spite of it.

According to Baker, actual GDP is falling… while debt soars heavenward.

But what is this “actual” GDP?

It makes no distinction between money the government raises through taxes… and the money it raises by borrowing.

Baker counters that the money government borrows must eventually be repaid.

Thus, it is not income.

It is “artificial stimulus”:

Unlike official GDP, it accounts for debt’s drag.

What is the path of “actual” GDP without the phony fireworks?

Examine the graph, roars Baker, and “tell me if you think the actual economy has healed.”

How much bounce has the post-2008 barrage of debt given GDP?:

And if that artificial stimulus is removed?:

Remove the stimulus and GDP collapses up to 7% — if the theory holds.

Meantime, the latest IMF report draws a grim sketch of the approaching scenery.

IMF director Vitor Gaspar says the “United States stands out” as the only advanced country planning on a rising debt burden in the years ahead.

The culprit being the Trump tax cuts… twinned with massively increased government spending.

We can only conclude that something is still broken in the economy… and will stay broken for the foreseeable future.

The problem at this point appears to be the problem of having the tiger by the tail.

The economy requires constant injections of debt to sustain the appearance of growth.

Is it not better to stop now, before the tiger grows larger — and hungrier?

Maybe the time has finally come to let the tiger go.

Our only advice is this:

Be prepared to run… and pray…