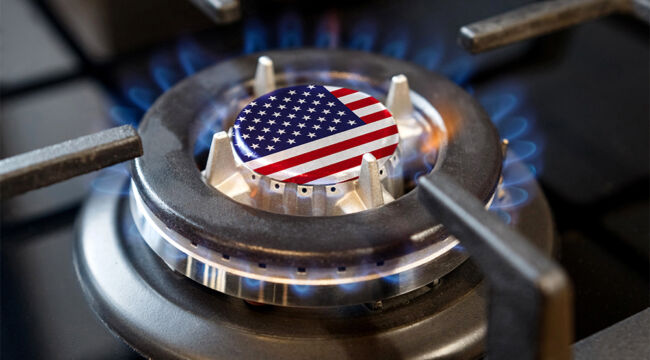 Your editor entertains a theory:

We Americans are frogs. We are frogs wallowing blissfully in a pot of fatally warming water.

We boil gradually away, unaware… comfortable… arrogant… and ignorant.

That is, we the American people have grown so accustomed to the warmth enwombing us — and for so long — we are incapable of detecting the ratcheting heat.

We will never jump the pot. We are simply too comfortable inside it.

We refer specifically and unequivocally to the warming water of the American fiscal setting.

The nation is spending itself into hot water.

The United States national debt runs to $31.5 trillion, approximately. The nation’s debt-to-GDP ratio comes in at 124%… the highest since 1949.

In 1949 the United States was still shoveling its way out of the World War II spending blitz.

What is today’s justification? Where is Herr Hitler and his conquesting Nazis? Where is Mr. Tojo and his imperializing Japanese?

What bank-busting Manhattan Project is the United States government funding?

To our knowledge there is no worldwide war. There are then no attending requirements for vast fleets and mighty armies.

And yet the nation’s debt-to-GDP ratio registers at 124%.

Yes, the pandemic with its lockdowns threw the nation’s finances into wild discombobulation. Yet even before the pandemic the debt-to-GDP ratio exceeded 100%.

That is, the United States churned out more debt than domestic product, grossly measured.

That is, the pot water was already warming dangerously and the frog lolling therein was already disnoticing the increase.

“Entitlement” spending — the quote marks are necessary — account for much of the warming.

On this topic former colleague David Stockman is shouting an alert. As David explains, entitlement outlays have heavily rotated the oven dial clockwise… from the lower heat settings… to the higher settings:

[The long-term growth of government transfer payment entitlements benefits since 1954] are self-evidently the heart of the nation’s fiscal doomsday machine.

And even when you make allowance for inflation and economic growth, the story is no less relentless. Back in the heyday of postwar prosperity (1954), America was booming and middle-class living standards were rising rapidly. Yet these transfer payment entitlements cost just 4.0% of GDP.

Needless to say, that’s a tiny fraction of today’s entitlement spending at 20.0% of GDP. And this staggering fiscal burden sits atop a national economy that is barely creeping forward on a trend basis — even as virtually every single dime of these expenditures has been authorized in perpetuity.

Hence your pot of increasingly warming water. Or in David’s telling, the “nation’s fiscal doomsday machine.”

Mr. Stockman was President Ronald Reagan’s director of the Office of Management and Budget. That is, he commands a very rich knowledge of the topic under discussion. Thus we are willing to lend him a listening ear.

In the famous “guns vs. butter” duality, entitlements represent butter. This tempting goo — people enjoy entitlements and clamor for them — has greased our way into the water, the water presently accumulating heat.

Yet as David explains: the “guns” have likewise eased our way in. It is thus a bipartisan raising of the water temperature, both gun and butter merchants working the oven dials clockwise:

The true threats to America’s national security today are a mere fraction of those posed by the nuclear-armed Soviet Union at the peak of the Cold War. That the current defense budget is nevertheless nearly two times larger in real terms is due to the fact that the constitutional processes for managing the nation’s fiscal affairs have essentially become vestigial.

What we have instead is history’s greatest log-rolling machine. This year, for example, the domestic spenders gave the military hawks in both parties the obscene sum of $858 billion for national defense in return for $773 billion of domestic pork. The combination amounted to $101 billion more than last year’s already capacious budgets.

$101 billion more than even last year! Can you believe it?

What do the American people receive for the extra $101 billion? Additional debt and an increase of the debt-to-GDP ratio. Beyond that, very little we suspect.

In words other, we will receive another counterclockwise working of the oven dial — that is, another increase to the water temperature.

Yet what is the one factor that may raise the water temperature to unendurable and fatal settings? Here is the answer:

Interest payments on the debt.

That is correct — interest payments on the debt.

It’s All Fun and Games While Interest Rates Are Low

They could afford to spree. They were after the free lunch and very nearly received one… because of suppressed interest rates. Once again, David:

Like so much else, the Fed’s previous money printing madness resulted in rampant borrowing by Congress, even as artificially low interest rates drastically suppressed the annual interest bill.

Consequently, Congress got the wrong message — the delusion that there is essentially a free fiscal lunch. Just since the year 2000 the public debt soared from $5.7 trillion to $31.4 trillion at present, a 450% gain. At the same time, however, interest expense grew by barely 80% during the same 22-year period…

That bit of arithmetical magic in which the debt grew nearly six times as fast as interest expense happened because the weighted average cost of net debt service dropped from 4.0% at the turn of the century to just 1.3%.

The Days of Wine and Roses Are Over

Yet the cost of lunching has undergone a magnificent increase. Interest rates have been on the jump since the summer of 2020.

After guttering along near 0.50% that peculiar summer, the 10-year Treasury yield presently exceeds 3.5%. It recently exceeded 4%.

Interest payments on the debt have jumped in consequence.

Meantime, the Congressional Budget Office projects these expenditures will triple over the decade ahead.

Glancing further out, CBO projects interest payments will near $66 trillion over the following 30 years. They will likewise absorb nearly 40% of all federal expenditures by 2052.

The frog in its pot will be well and truly cooked.

What if Interest Rates Rise Even Higher?

Yet CBO’s crystal-gazings assume a reasonable increase to the interest rate. What if rates rise unreasonably, at substantially higher paces?

CBO’s latest federal spending projections tell you all you need to know. Even with its relatively moderate forecast rise in Treasury debt yields, outlays for interest expense are projected to rise by 200% over the next decade. That’s triple the projected growth of health and Social Security entitlements and 7X the baseline gain in defense and nondefense discretionary appropriations.

Needless to say, the impending massive explosion of mandatory debt service has not been in the playbook of either the Washington pols or the Wall Street speculators. It was just assumed that wildly growing public debt would never present a carry cost problem.

And the American citizen wallows away in the increasingly warming water that envelops him.

He mistakes it for comfort. He will one day learn otherwise.

Alas… he will learn too late.