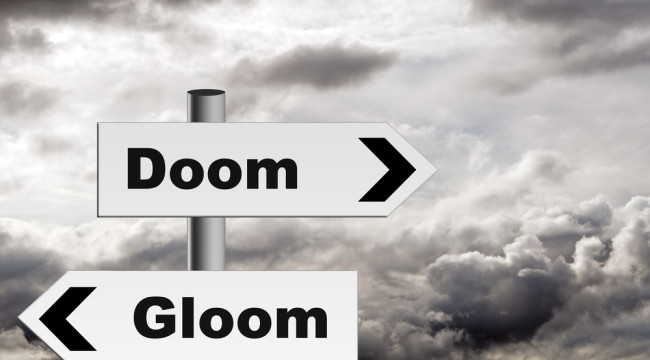 Lately, the world is understandably all nervously atwitter about many things, mostly whether things economic…

Perhaps, pausing for breath, due to something (shall we soothingly-yet-ominously say) untoward happening.

“Untoward happening.” It’s a nice, vaguely sinister phrase, and so handy when the kids whine something like “And what if we DON’T stop acting like greedy little snot-nosed, mental-defective brats who want new cellphones and nicer cars, like all our friends whose fathers are not stingy, paranoid, whack-job weirdos like you, and that’s why we hate you, in case you were wondering?”

Now, being a good father who lovingly tries to educate his children by screaming at them (supplying that all-important emphasis), you knew that when they were young, their attention spans were limited and they were still thinking too concretely to understand abstract concepts. Understanding this, you, as the considerate and loving parent, could calm them down and conveniently end the conversation by explaining “Shut up.”

Now that they are older, you have to explain everything, all subsumed under the heading “You’re morons!”

Now, as the thoughtful and dedicated parent, you patiently explain to them “For some mental-defective reason, you morons refuse to comprehend absolute necessity of buying gold and silver when faced with the suicidal enormity of the Federal Reserve creating so much cash and credit that everything…

Including the Entire Freaking Economy (EFE) and half the population, directly depend on the gargantuan, gluttonous government continuing to deficit-spend more and more money, inflating the money supply above the already-enormous inflated level which allowed all assets to inflate into these dangerous, deadly bubbles!”

Of course, you could, trying to do the best job of parenting that you can, also explain that the government NOT continuing to increase the deficit-spending means that the fabled Keynesian multiplier (which actually does exist and equates to around five, as do most multipliers) will go into reverse, and five dollars of spending will disappear with every dollar not created and deficit-spent.

But getting back to the basics of Explaining Things To Stupid Kids (ETTSK), now would be a good time to throw a little guilt in there, too. You can add “How can you embarrass me, over and over, for not knowing that silly Deficit-Spending Crap (DSC) always ends badly with an inflationary hell for things you need to live, and with a deflationary hell for paper assets?”

Finally, as a coup de gras, appeal to their greed. This is where you can casually throw in “And then gold and silver will again reign supreme, as they always do, and then you can — glory of glories! — have all the money you want! Piles and piles of money! All for you!”

Nowadays, alas, they are old enough to have learned at least a smattering of the Austrian school of economics, and thus they know that those piles and piles of money that I tantalizingly refer to won’t buy squat because of the lack of buying power of each dollar, thanks to the monstrous over-issuance of cash and credit by the evil Federal Reserve.

As a case in point, take a look at the pitiful case of Zimbabwe, as I suggest everyone do: They printed so much cash in a single decade that their old Zimbabwe dollar is literally worthless, and their economy (once a shining star of all of Africa) has collapsed to the point where they again need foreign aid, just to keep their citizens from starving.

So you can understand my irritation that my loving family ignores all that, and greedily prefers nutritious food, decent clothing, washing machines that don’t leak, dental care and all the rest of the luxuries that I cannot afford, even if I WASN’T furiously using every available dime to buy gold and silver because (all together now!) We’re Freaking Doomed (WFD)!!! Doomed!

Okay, now that I have you all worked up, you can relax. Yes, it’s WFD one day, but maybe — just maybe — not yet! The soothing-yet-terrifying truth is that with ethically corrupt governments and a fiat currency, there are a lot of things that can be done. A lot!

They can, as an extreme example, literally create enough fiat money to buy Every Freaking Thing (EFT) that exists. Every stock. Every bond. Every house. Every debt. Every everything. All they need is a willing seller.

More realistically, the government can deposit fiat money into your bank account (“free money”). They can send you a check (“advance tax rebate”) through the mail, or let you claim it on your next tax return.

They can let you deduct actual debt from your tax return (thus lowering your debt), while simultaneously letting your creditors claim a 100% tax credit to offset their loss! Everybody wins!

In short, there is nothing that they can’t do. And there is nothing to stop them, now that the government has passed laws that allow them to do illegal acts in the name of protecting national security and/or the integrity of markets.

So whither the markets? Well, with monetary and fiscal powers like that, it would be child’s play to let the markets sink a while, flushing out the weaker and less well-connected hands, reducing the prices of assets from “bubble la-la land” to “buy territory,” consolidating repossessed assets in the banks, and inflicting real pain on people and their retirement plans.

Then it’s just a matter of sitting back and waiting until the frantic call goes out through the land: “Somebody do something! Make the government do something!” which is the green light to goose markets up via Keynesian deficit-spending, building the bubbles back, and thus giving the banking and financial-services industries another chance to set up another flimflam, by which they will profit and we will lose.

Hahahaha! One choice has never succeeded and one has never failed, and you ask me which one to choose? Hahahaha! Obviously, I have to explain it to you as if you were a child: Shut up! Hahahaha!

If you were older, perhaps you would know to buy gold and silver, your parents would be proud of you, and that, best of all, “Whee! This investing stuff is easy!”