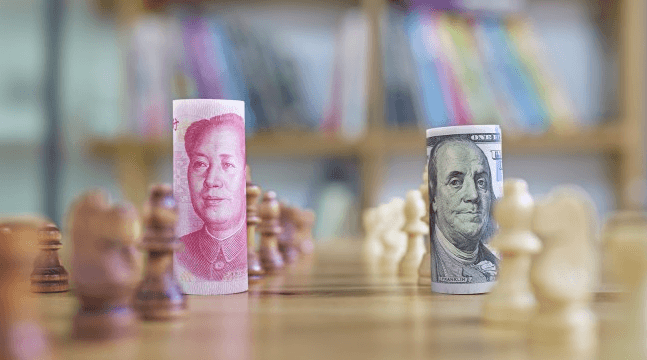 After the Currency Wars

LONDON – Not everyone can “win” a currency war.

If one country’s currency falls, it means others have strengthened in relation.

A weaker currency may stave off deflation temporarily (e.g. by making imports pricier). But retaliatory action from other countries puts you back where you started.

“The aggregate effect of currency declines has failed to reduce the risk of deflation at the global level,” says Stephen King (the HSBC economist – a different kind of horror writer…) in a note out this week.

Worse than that, King reckons the uncertainty created by exchange rate skirmishing reduces the beneficial impact of international trade.

In short, the world can’t get richer just by everyone trashing their currencies. It probably makes it poorer.

Cue Some Other Half-Baked Schemes

So what to do instead?

King outlines four possibilities. The first – which he describes as “fatalistic” – is to “accept that monetary policy can do little more to boost economic growth”.

If economics had some kind of Hippocratic Oath – “I will utterly reject harm and mischief…” – the debate would probably end there.

But it doesn’t. So, marching on…

To be fair to him, he does highlight the risks:

Would central banks lose their independence as a result and, if they did, would governments suddenly find themselves able to spend without limit? The danger would surely be a bout of excessive inflation accompanied by a currency collapse.

Still, seeing this sort of thing discussed in yet another mainstream venue is disquieting.

As I said last week, debt monetisation feels closer than ever.

King is sceptical (rightly in my view).

“Japan had its share of “bridges to nowhere” while Spain enjoyed an infrastructure-led boom before its property-led bust.”

The fourth strategy is negative interest rates on saving – accompanied by the abolition of cash to prevent people just putting banknotes under the mattress.

We’ve covered this before too.

Which of the Four Look Most Likely?

The upshot is that we have yet another serious member of the financial services establishment floating ideas that would have been seen as nothing but dangerous even five years ago.

So where are we likely to go next?

Well, scenario one’s unlikely. If the deflation threat persists, the urge to “do something” will be overpowering.

I also have my doubts about scenario four. I’ve seen an increase in “war on cash” narratives recently. I think it could be a red herring. Or at least a distraction from the main event.

Firstly, do not underestimate what most people will tolerate in the name of convenience. Look at how we’ve happily adopted smartphones with GPS tracking – a surveillance state’s wildest dream.

Most people are inherently lazy and will do anything for a quiet life. Our society’s move away from cash has been mostly voluntary because it’s made things more convenient.

It’s odd to call something a “war” when it involves cheerful acquiescence.

Second, I suspect a lot of people actually would put up with negative savings rates, at least up to a certain point. It may seem irrational, but that’s people for you.

No one knows where that certain point is. It hasn’t been tested.

Cash is not dead yet

Nor has the public’s attachment to cash been challenged head-on yet. And, for now, the public remains very attached to notes and coins.

According to the UK Payments Council, 48% of transactions were conducted by cash last year. That may be less than half, but it’s still substantial.

Policymakers like a quiet life too. So I’d be very surprised if outlawing cash is the next lever they pull.

Especially when the trend is in their favour – why not let it happen anyway?

Far more likely is debt monetisation – funding public spending via central bank printing. There are several ways this can be done while making it look like it’s nothing to worry about.

Next on the list could be negative interest rates on savings – not too much, and possibly in the form of extra administrative charges rather than quoted as a rate (these already exist on many accounts anyway).

Then, perhaps, we could see the end of cash. Quite possibly with minimal coercion needed.

Ironically, those warning about a “war on cash” could make debt monetisation seem a more palatable alternative.

The Stimulators’ PR men couldn’t have devised a better strategy themselves!

So some combination of the second and third scenarios seems most likely.

Find out more about a trial membership here

Now, I’ve framed all of the above in terms of the ongoing War on Deflation.

But what if that’s not the right enemy? Are we being complacent about inflation? More tomorrow.