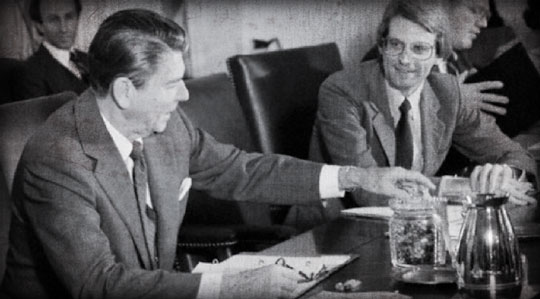 After 20 Years of Bubble Finance, the Top Is In

The US stock market has been inflating almost continuously since Black Monday in October 1987. Then, the newly arrived Fed Chairman, Alan Greenspan, panicked and opened up the money spigots.

In fact, the S&P 500 had risen by nearly 1000% as of the recent May peak. It’s important to note that that increase was not due to the traditional domestic business cycle. It wasn’t due to booming growth in the Main Street economy, either.

On the back of $225 trillion of debt, the world economy got drastically overbuilt. The bubble expanded from the boom’s epicenter in China and throughout the global food chain.

It spanned the Emerging Market (EM) economies which supplied it… the petro-states which powered it… and the Developed Market (DM) economies which consumed more than they produced and financed it from borrowings and speculative windfalls. 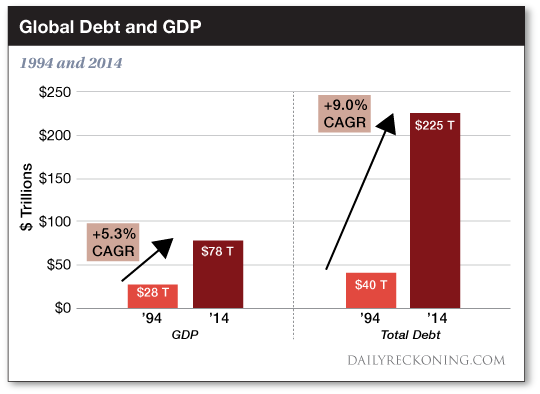 But fair warning: This tide is now receding.

The global commodity crash and capital expenditures (CapEx) depression is driving corporate profits lower. This is a trend that will sharply intensify in the year ahead of us.

At the same time, the central banks have reached the end of their rope. The EM banks like that of China must now shrink their domestic monetary system and credit in order to prevent monumental capital flight.

In the last five quarters alone China has had a $800 billion outflow.

The DM central banks are in an even worse predicament. They have held interest rates at the zero bound for seven years. So doing, they bought up a fair share of the public debt via fiat central bank credit from quantitative easing (QE).

The implication for the stock market is straightforward…

Loss of confidence in the central bank money printers will cause valuation multiples to contract. At the same time, the accelerating global commodity crash, capital spending plunge and declining trade volumes are bringing on worldwide recession. This is something central banks will be powerless to reverse by using more monetary stimulus.

That means one thing:

Stock prices will be under pressure for as far as the eye can see.

The market top is in. not just for the so-called recovery cycle since June 2009, but the entire central bank Bubble Finance cycle of the last 20 years.

To be sure, bull markets do not die easily. Especially ones that have been fed a constant diet of easy money, central bank props, and bailouts. So it is probable that the tops will be tested over and over until the last dip-buyer throws in the towel. Or until the last robo-machine is reprogrammed to sell incoherent central bank press releases instead of buying every hint of more free money.

For that reason a market failure zone is emerging high in the hills above the recent short-lived tops. The latter represent a kind of monetary rigor mortis of the phony, dying bull market, and not evidence of a new leg higher. 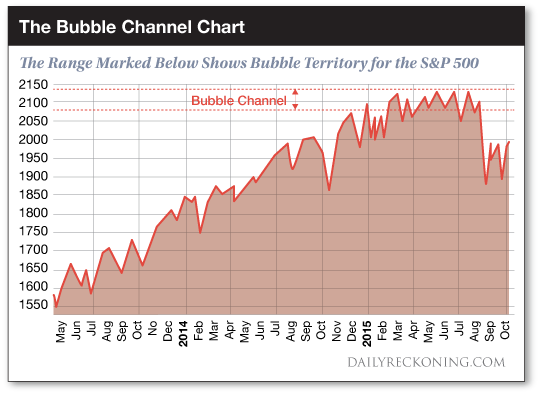 In the case of the S&P 500, those spasmodic tops are in the 2075 to 2125 range. The market has been chopping sideways for about 500 days. Now, it faces the oncoming headwinds of a intensifying global economic slump. 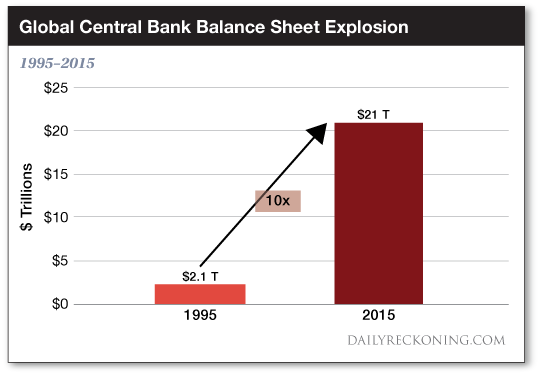 The world’s equity markets are now especially vulnerable. Stocks sit atop the global financial bubble. In 1994 when the Fed and other central banks began their money printing spree in earnest, the combined value of the world’s stock markets was about $15 trillion.

By contrast, at the May-June peak this year total global market cap had exploded to $75 trillion.

Since then about $13 trillion in paper wealth has been wiped out. Poof. About two-fifths of that evaporated in China’s stock market alone. And that’s just the beginning.

During the last crisis in 2008-2009, world equity markets plunged from $64 trillion at the peak to $30 trillion. That’s more than 50%. On top of that came trillions more in losses from subprime mortgages, securitized debt and junk bonds.

In all, about 16% of the $240 trillion of value of worldwide stocks and debt outstanding at the time was sold off. 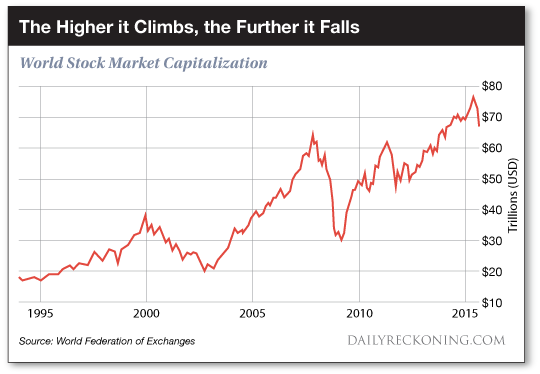 At the recent peak, the dollar value of the global stock market stood at $300 trillion ($225 trillion of that was debt. $75 trillion was market equity). Today it’s vulnerable to a drastic, sustained wipeout. Caveat emptor.

The 2008 collapse was quickly arrested by an unprecedented money printing campaign. The credit was artificially created by the Fed. It didn’t take long for virtually every central bank on the planet to follow in its steps.

But don’t expect that next time. There will be no Wall Street rescue as the era of Bubble Finance comes to a close. The world’s central banks have shot their wad. They have pinned interest rates to near zero for 81 months running. As practical matter they can’t go lower.

Quantitative easing (QE) does not stimulate the Main Street economy after consumers and businesses hit “peak debt”. Look no further than here in the US… or in the Eurozone… and Japan for cases in point.

QE does one thing: It inflates financial asset prices and fuels bigger and more dangerous financial bubbles. If you understand that, you’re light years ahead of Wall Street.

There’s a widespread expectation on Wall Street that central banks will attempt a new round of wild-eyed monetary stimulation. The suits in Goldman Sachs and elsewhere don’t expect the global deflation to continue unabated… or for financial markets continue to fracture.

They’re in for a rude awakening. It is highly unlikely that central bankers’ desperate measures will reflate the world’s $300 trillion financial bubble.

The world market cap chart above might then get a new caption. Namely, “Look out below!”