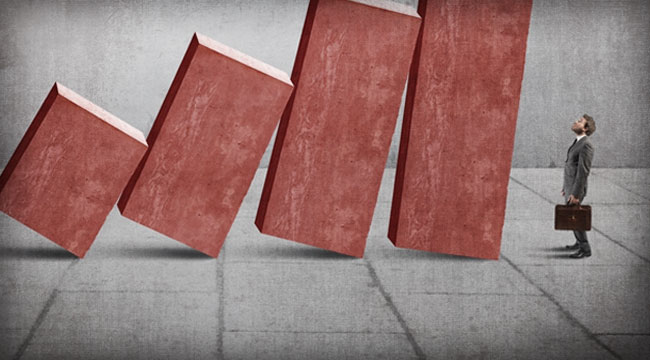 A Violent End for the Global Financial System

Here’s a World War D scenario for you, dear reader…

As a retaliation for US sanctions on Russia in the wake of the invasion of Ukraine, Russia responds like this: Hackers attack the New York Stock Exchange and force it to close indefinitely; the Russian government dumps its billions of US Treasuries in the open market, causing interest rates to rise and crashing the US real estate market. The banks go into turmoil as people panic and withdraw their money. It would be a Russian strike on the US, without firing a shot.

That’s just one scenario hedge fund manager, economist and author Jim Rickards painted on the new era of financial warfare in his speech this morning at World War D.

…the world financial system has no anchor while a…war goes on between inflation and deflation.

Rickards had the unenviable task of following on from Marc Faber’s opening act. But any man that’s war-gamed at the Pentagon is going to have a lot to say when it comes to financial warfare. And in a world of interconnected currencies, derivatives, hedge funds, and bond and stock markets, your money is right in the middle of it. We’re all hostage without even really thinking about it.

And if you think the Russian scenario above is far-fetched, Rickards pointed out that the US effectively did something similar for real in Iran. It was only a few years ago that the US government shut Iran out of the US dollar payments system. This was in response to Iran’s nuclear program.

Iran responded to this and wanted to sell their oil in euros (Saddam Hussein threatened to do the same thing once). The Iranians quickly found themselves shut out of SWIFT, the European payment systems as well. Within a year, Iranian oil exports fell over, the currency collapsed, inflation ran riot in the Iranian economy and the Iranians banks almost went broke. Rickards argued that the Iranian regime only survived because Obama eventually backed off the sanctions.

But the thrust of Rickards speech was whether the US dollar will survive in its role as the reserve currency of the world and hold the current system in place. It doesn’t take too much guesswork from the subtitle of his new book The Death of Money: the Coming Collapse of the International Monetary System to see where he stands on that front.

Rickards made the point that a major pillar of support for the US dollar is on wonky foundations: the Saudi-US alliance. The deal’s been simple for over forty years. The Saudis sell oil in US dollars only. The US provides protection and security to the House of Saud. This deal was brokered between Henry Kissinger and the Saudi royalty in the 1970’s.

But Rickards argues that the Obama administration has moved to appoint Iran as the regional hegemon, and this is regarded as a stab in the back by the Saudis, who may now move to align with Russia and China.

But the major destabilisation of the US dollar system is of course the huge inflation of the money supply of the US Fed since 2008. According to Rickards, this has killed the ‘King Dollar’ period of about 1985 to 2010. So the world financial system has no anchor while a massive tug of war goes on between inflation and deflation. The world depression – and he used the word depression deliberately – is naturally deflationary. Central banks cannot have deflation. So they’re trying to offset this by printing money and generating inflation.

So where is the inflation? That brings us to the topic of velocity of money. Rickards is one of the few commentators who talks about this. At its basic, it’s the speed with which money circulates in the economy. And right now the velocity chart is in free fall in the United States. The Fed cannot generate the outcome it wants while this is happening. The catch for Fed Chair Janet Yellen is the Fed has no power to turn this around. Velocity is what Rickards called psycho-behavioral.

The Fed can print money. But if no one spends it, the money has little effect on the economy. So the question is: if the Fed finds a way to get velocity to rise, you’ll get inflation. If velocity really rises, you’ll get a huge uptick in prices. If velocity doesn’t rise, the world will be mired in a deflationary trap that scares the hell out of the central banks. Why? Debt burdens go up in real terms. Tax revenue falls over. Banks fail.

But the key point Rickards wanted to get across was the Fed and the other central banks see no limit to the amount of money they can create to generate inflation. But he says they ignore the role of complexity and are putting the system at risk of collapse. He used a familiar analogy to make his point. Imagine sitting in a crowded theatre. Two or three people leave. You don’t think anything of it. You stay where you’re seated.

But if 100 people stand up and run out you’re going to think about running out with them – even if you don’t know why. Make it 200 people and you’re out the door in a flash. This is the critical state of the financial system according to Rickards. And if another crisis hits, everyone just might head for the door, There are four likely scenarios after that – a return to gold, an IMF currency, a basket of currencies or complete collapse of the monetary system. As above, you know where Rickards is betting.

Callum Newman
for The Daily Reckoning

Ed. Note: If a currency war is the next chapter in this modern economic saga, the will be a handful of people who are prepared for it. And you can easily be one of them. Sign up for The Daily Reckoning, for FREE, right here and get daily commentary on how to safeguard and grow your wealth in any kind of market.