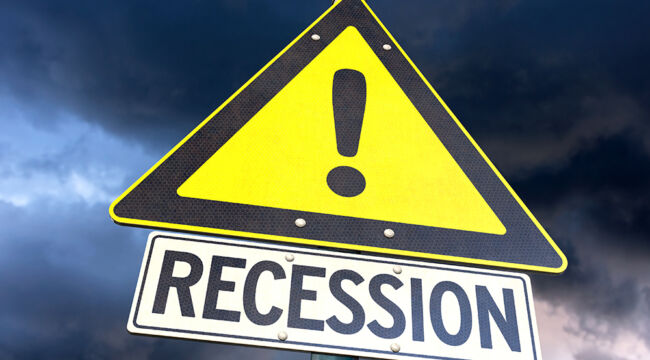 Can you believe it? Joseph Biden has weighed in on the great question of recession. He says he doesn’t think there will be one. If there is, however, he says “it’ll be a very slight recession. That is, we’ll move down slightly.”

How about the longest decline in real income in the postwar period? That’s where we are right now. We are two quarters deep in declining real GDP. In about 10 days, we’ll get reports on the third quarter. At this point, hardly anyone believes these reports in any case. We only watch them to see what the next official excuse will be.

Watching politicians speak these days is like watching a bad comedy series. It’s like they are caricaturing themselves. It was Biden who said inflation was transitory and then that it is only moving up an inch. Meanwhile, people shop in stores and fill up their gas tanks and discover the truth.

We are being financially slaughtered by these people.  Moving down slightly is not the best phrase. Falling apart is more like it.

The IMF, World Bank, and every major investment firm have downgraded predictions for U.S. growth for next year. They are just making things up of course. The figure they are all throwing around is 1% growth. That’s just wishful thinking. The decline is already here and it is dramatic.

The sectoral problems we are facing are immense, and nowhere are they more clear than in the energy sector. The Biden administration along with the European Commission have placed a priority on transitioning from fossil fuels to the sun and wind, which would amount to the forced dismantling of industrial civilization and mass human suffering on the part of those who live through it.

These people now having held power for two years, and then fomenting a war with Europe’s major provider of energy resources, Europe is in major trouble. Gas and electricity rationing and price controls took over policy in a matter of weeks. There are street fights over gasoline breaking out across France.

Just how serious is this? Very. The lights on the Eiffel Tower are now being shut off before midnight to save about 4% of the costs of lighting the thing. It’s already in disrepair, much like the public statuary in Rome, simply because the government is so mismanaged that they cannot get the funds and focus to keep the thing looking pretty.

The tragedy is huge but the symbolism is more so. The tower is a beautiful symbol of the Belle Epoque of French history, finished only five years after France gave the U.S. the Statue of Liberty.

That whole generation was in a swirl of wild excitement about how technological innovation was going to spread prosperity and peace throughout the countries and the whole world. The statue and the tower were both symbols of that outlook.

Economic growth rates in that period in the U.S. under the gold standard reached double digits. Life spans expanded dramatically. Incomes exploded. People were moving to the cities to escape generations of poverty in the countryside. It seemed like nothing could go wrong.

The music of Mahler and Brahms swept Europe and the U.S. was exploding in areas of art and publishing. Schools had affordable textbooks for the first time. Flight was being experimented with. Internal-combustion engines were the rage. The rich were installing electric lighting. Indoor plumbing was coming to middle-class homes along with new systems of heating.

What a time! The Eiffel Tower was built as a monument to progress and released at the 1889 World’s Fair, which also featured the first elevator company, Edison’s new phonograph as well as the Barnum and Bailey Circus. Love of progress was everywhere!

And yet here we are today, a time when France forces the tower to go dark to save resources.

It’s a bad omen, I tell you. The lights are literally going out on everything we only recently called civilization. It’s like they are TRYING to create the new Dark Ages.

We hope you did not own much PayPal stock before the meltdown of this company this week. A bureaucrat decided to put into the “acceptable use policy” mention of what they were already doing, which was deleting the accounts of people they don’t like. So the new statement said that they would take $2,500 from anyone spreading “misinformation.”

The anger online exploded thanks to Twitter and other sources. People began to pull their money out and shut their accounts. It was a run on the bank! Only then did PayPal relent and tell their users that it was all a mistake. The idea that they would pillage you for misinformation was itself misinformation!

In truth, this was nothing but a foreshadowing of life under central bank digital currencies. They want to surveil us all and take our money for holding the wrong views. China has shown the world that they can control the whole population this way. PayPal was designated to be the test case.

In truth, this was a huge disaster for the company simply because of the customer revolt.

Here’s the problem all these companies face. They can either serve their customers and the stockholders or they can serve the ruling class. They cannot do both. Every single tech company and bank today will have to choose.

The Public Wakes Up

The last 30 months of public life in the U.S. and the world have been an amazing disaster for regular people. But there is an upside. Now we all know exactly what it is they are trying to do to us. People are furious and ready to act, just like the massive public revolt that PayPal faced.

Will it be enough to stop the decline and fall of the West? We await the answer but there is more hope today than there was a year or two ago. A giant called public opinion has been awakened, and they are making sure that the woke go broke.

It’s only round one with many major battles ahead. The ruling class that is wrecking the world will not go down without a fight but at least that fight is now being engaged. The tragedy is that it did not have to be this way.

As in 1889, only a few years ago, the West was on course to fix many problems and build a bright future of technology and prosperity. Instead, a small cabal decided to take us in the other direction and now we truly face a choice. We can get the lights back on — even if fueled by fossil fuels — or face a grim new Dark Age.

Whatever that looks like, it will not be a “very slight” recession.