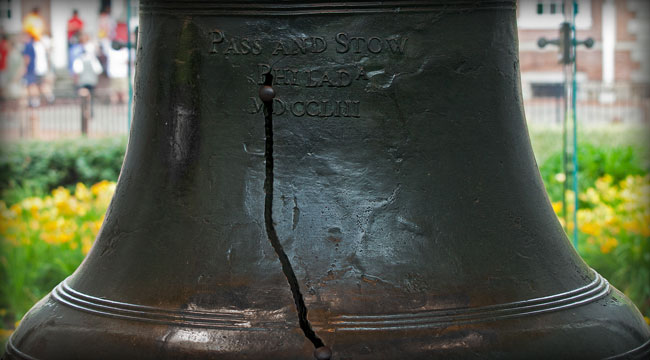 A Very Good Idea... Someone Ought to Try It

Can the idea of America be revived? I certainly hope that it can, but I have my doubts. Reading through world history, one finds so few examples of liberty that one quickly concludes that the liberty enjoyed by Americans from, say, 1786 to 1913 was a pure fluke. This sort of liberty has virtually never existed anywhere else under any sort of circumstances. In the civilized world, or at least in the modern civilized world, examples are few and far between of anybody enjoying anything like the liberty that Americans had. This suggests that it does not correspond to the way things are meant to be.

More optimistically, perhaps social trends follow long-term cycles or waves; for it is not just America that lost its liberty, all other Western countries lost theirs during the same period. Consider France. Despite the French Revolution and the Declaration of the Rights of Man, which sounded a bit like the Declaration of Independence, you wouldn’t say, except in a rhetorical way, that this country had the same cultural and political tradition as the United States. Yet, the same anti-liberty trend has evolved in France during the twentieth century. We observe the same phenomenon in Britain, in all the English-speaking countries, and (as far as I can tell) in all European countries.

The liberty we enjoyed might be traceable, intellectually, to the Scottish Enlightenment, but it especially flourished in the New World, where it was very difficult to control people. And one might say that what happened over the next 200 years or so is that people simply reverted to what is more or less the natural state of mankind, which has always obtained in most of the world — that is, a situation where people are in chains.

This hypothesis is in sharp contrast with conventional wisdom at the beginning of the twentieth century. Freedom was seen as a natural progress for man. Surveys of business leaders and intellectuals all over America showed a general belief that freedom would increase along with material progress. People were very optimistic: they believed that war was a thing of the past, that poverty would be eliminated, that the state would shrink because — they thought — there was less and less for the state to do.

Then came World War I and, in a matter of months, all optimism died in the trenches. In fact, an anti-liberty momentum was already building up before World War I: remember that the income tax was imposed in America in 1913, the same year the Federal Reserve System was born. Instead of the twentieth century leading to more liberty, it led most of the world in the opposite direction.

We don’t know why this happened, but everything seems to degrade over time. The institution of modern democracy was established in America and France — and, in different forms, in Britain and Germany — around the end of the eighteenth century. Since then, these democracies have evolved, but every step on the way was a step towards less individual liberty. Systems for regimentation, regulation and control were built slowly. It took a hundred years or more to establish the Internal Revenue Service or the Interstate Commerce Commission. Such monsters do not spring from the mind of man fully formed; they develop over time, eating away liberty one bite at a time.

Perhaps, over time, the modern state becomes a heavier and heavier burden, fewer and fewer people do effective and productive work because more and more are on the state payrolls, and everything becomes more and more expensive. The state gets into a situation like under Louis XVI in France: the opposition mounts, you have some sort of blow-up, and a new form of state takes over. That you need a revolution every twenty years was Jefferson’s idea: you need something to clear away heavy institutions and unproductive activities.

Could elections revive freedom? Not likely. Typically, people do not vote for freedom; they vote for someone else’s money.

Nor is an intellectual movement likely to restore liberty. Ideas matter, but they don’t matter much. You can write down a constitution, but in doing so, you open the door to another constitution. Anything that is up for grabs is up for grabs. So once they wrote down the Bill of Rights, they invited somebody to interpret it, and others to write subsequent amendments, and so on. It was thus inevitable that the Bill of Rights would move forward with the whole society and become an instrument of the state against personal freedom.

Can we citizens do anything? Unfortunately, again, things don’t work that way. Institutions have their own logic, which by and large escapes any identifiable influence. Things just go along. Thinking people have, at least in the short run, no influence at all.

Again, think about World War I. After a couple of years, it became obvious what a complete and utter disaster, what a terrible waste, it was: by 1916, there were 10 million dead. The armies were bogged down; the soldiers, the general, the statesmen were sick of it all. Everybody was sick of it, and yet the trend did not allow for disengagement. Nobody could stop it. Victory was the only possible goal to be pursued. Any politician who stood up and argued, “I don’t think we should win, I think we should just give up and go home,” would have been deemed a traitor.

In public matters, people don’t come to their senses the way they do in private matters. A private person will wake up one day, and say, “I have to stop drinking and go to a detox center,” and turn his life around. But a mass of people cannot do this.

Consider what is happening in public finance. An individual might say, “This country must stop spending so much money.” But he will not want to give up his own public benefits — his Social Security, his Medicaid, all his government checks. He has no reason to give up his benefits, because it wouldn’t make a dent in the problem. It is as if the whole nation had a single credit card. It does not make any sense for a single individual to take himself off the Social Security rolls.

Thus, mass institutions have no way to correct their own courses; they must continue down the path to ruin. Eventually, the state runs out of money, goes to war, gets defeated, and comes out totally bankrupt. Argentina has been through this. At one time or another, nearly every country has followed this path, but not the United States — yet.

This is why, I believe, Americans are so complacent, so positive, so optimistic, so bullish, so naïve. We are running the biggest current account deficit that any country has ever run, we owe more money to more people than any people ever owed, and people just think, “We’ll work it out.” “We’ll “grow out of it,” say the supply-siders, “we’ll lower taxes some more.” Americans believe that things will work themselves out without any pain or suffering. The bill will never become due.

These trends can last hundreds of years. Things go well for a long time — empires grow and grow — and then they don’t go so well, and finally everything collapses. I suspect that the American society, the American economy, and the American state are close to the peak of the curve.

The limit may soon be reached as to how much can be borrowed and promised. The state can’t promise much more. It has no way to pay for it. America’s emphasis on militarism may well be a result of the state being totally strapped and looking for emergency exits. We may be broke — in a sense, we are broke — but we are still the world superpower.

Like people, institutions get old, become expensive to maintain, and eventually they die.

Ed. Note: This essay was prominently featured in the Daily Reckoning’s free email edition — a free newsletter that deals with all of the issues facing America’s broken political and financial system. If you’re not yet receiving the Daily Reckoning email, sent straight to your inbox every day around 4PM, you can sign up for free, right here.