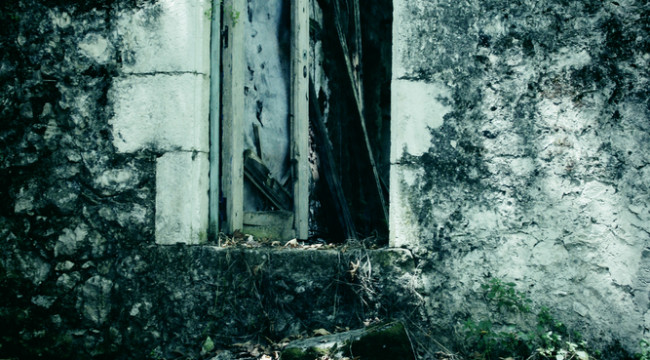 A Peek Behind the Federal Spending Curtain

I have a new investment recommendation for Daily Reckoning readers. The idea is squarely in the middle of the high-tech materials space. It’s true cutting-edge! (Heck, NASA and many U.S. national labs are part of it.)

I was in Washington, D.C., for a couple days last week. Things are totally screwed up — both on the “political” side in the District proper and the military side in northern Virginia. It’s worrisome. It’s scary.

For all the money that flows through Washington, the spending situation is simply insane. I’m reminded of something I learned in an earlier life, when I practiced bankruptcy law: Liquidity is not the same as solvency.

Yes, every federal agency has rules labeled “financial controls.” Every office has a budget and its dreaded comptroller. Heaven help the humble bureaucrat who pays too much for an airline ticket, rental car or motel room. And oh, by the way, the so-called “government rate” for day-to-day operations is designed to find the middle rear seats on airplanes, the crummiest rental cars and the most fleabag motels. Not everybody gets to spend big bucks vacationing on Martha’s Vineyard, if you know what I mean.

But at the top end of government spending? Up in the ether, where Congress is supposed to exercise budget oversight and control? That system is just plain broken. It scarcely exists anymore, really.

The Budget Impoundment and Control Act of 1974 totally ruined modern federal spending, and by extension national governance and long-term solvency (long story). More recently, the country has had no true, deliberative “federal budget” in at least five years. The U.S. is running off a series of “continuing resolutions” that just put spending and increases on autopilot.

Sure, Congress tweaks the budget here and there. Let’s say that a big political issue pops up. You’ll see a special appropriation — larded up with all manner of pork-barrel spending. But there’s never an overall budget review or rationalization. Programs never die. Heck, the Department of Agriculture pays dead people not to grow crops.

The country is too politically divided to make big political changes. It reflects in Congress and the executive branch.

Then again… we get to that Defense Department “sequester” thing. It’s a political budget gimmick that went bad — although there are plenty of people in Washington who want to see the Defense Department suffer. They have their reasons.

During my trip, I called on offices in the Pentagon and along Jefferson Davis Highway in nearby Crystal City. The defense budget is taking billions of dollars in hits between now and the end of fiscal 2013, on Sept. 30. In 2014, the budget is taking a $50 billion hit, more or less.

It follows that life today inside military procurement commands is all about squeezing juice out of every line item. And oh… those green eyeshade guys are brutal.

For example, budget wonks already canceled the 2013 season for the military’s iconic flight demonstration teams, the Navy Blue Angels and the Air Force Thunderbirds. Why spend another $20 million to let people across the country see military airplanes, right?

Now the budget musketeers are running spreadsheets on how to reduce pay for troops and cut back on things like housing allowances and retiree health care. It’s grim.

The thing is now that the Iraq war is over (we’re out of there, anyhow) and the Afghanistan war is winding down (we’ll be gone soon), the nation doesn’t need all those expensive ground pounders. Send the old war horses out to pasture, eh?

Looking ahead, the country needs to recapitalize its defense equipment. That is, we fought two Middle East wars with tanks, trucks, airplanes and ships that date back to the 1970s, 1980s and 1990s. Much of the nation’s equipment is worn out.

We get into nasty procurement situations, though. Consider the problematic F-35 airplane that’s supposed to do everything but can’t (don’t get me started). Or the even more problematic littoral combat ship that’s also supposed to do everything but can’t (ditto). God forbid that we buy more submarines that CAN do astonishing things. Or recapitalize the space satellites that are fast running out of service life.

In essence, the country is getting rid of soldiers who know how to fight in order to buy super-expensive equipment that can’t do the job. It’s the worst of all worlds. To paraphrase Winston Churchill, I hope we eventually do the right thing, but it’ll likely be after we’ve tried all the wrong things.

I visited Capitol Hill too and spoke with a couple of congressional staffers. They were cordial, as well as professional and candid about spending issues. They gave every indication of understanding how screwed up things are. At the same time, these guys were relieved not to be covered by Obamacare anymore, courtesy of President Obama’s recent executive action. Oh, to live in such a happy nest!

One of the things that struck me in Washington was how fake things are. One big image hit me right in the eyeballs as I was riding in a taxi to one of the nice office buildings up on Capitol Hill. Here’s the U.S. Supreme Court building. Notice anything? 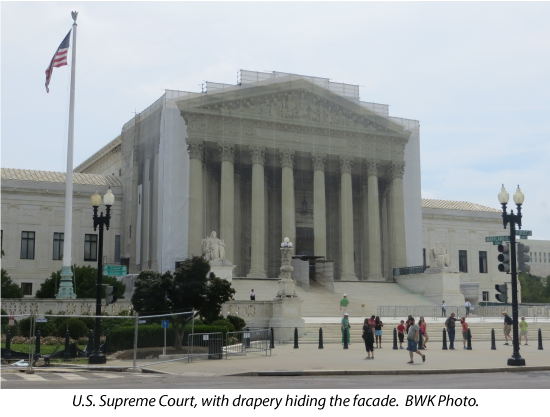 Apparently, the Supreme Court building is under repair. That’s OK. If the building needs to be fixed up, then fix it up. But here’s where the Washington mindset gets interesting. Rather than have passersby and visitors to see scaffolding and such — “men at work” and all — there’s a huge drape in front of the edifice giving the appearance of all being normal.

The Supreme Court building is “normal,” of course, until you look closely and realize that it’s fake, like a Potemkin village in the days of Russian Empress Catherine II.

The Potemkin Supreme Court prompts a couple of thoughts. First, that’s taxpayer dollars at work hiding the evidence of construction (while the Blue Angels and Thunderbirds are grounded). Second — and maybe it’s just me — but if the front of the building is fake, then what does that say about what goes on inside? Just sayin’…

Leaving town, I drove north along the George Washington Memorial Parkway. Looking back at Washington in the rearview mirror, I had this truly foreboding sense that the “old way” of doing things is over. There’s not enough money. At least, there’s not enough money to do things the way we’ve done them for many decades. The government just spends it wrong.

Looking ahead, what’s next? Will the nation fund anything new and unusual? If you know much about government bureaucrats, you probably think that they’d be crazy to spend funds on anything that’s untried, untested and way out there on the bounds of reality, right?

Actually, that’s wrong. Amidst the budget carnage, there are sweet spots. There’s funding for true innovation. I’m tempted to say, “Don’t tell Congress,” lest they slice it out of the next defense appropriation.

But for now, there’s a revolution going on in the world of atomic-scale materials. For our purposes — yours and mine — it’s investable.

And this brings me to the new investment idea that I have for you. It offers a way for you to surf the wave of the next industrial revolution. Plus, I promise that I can put my finger exactly on a variety of new substances and technologies that WILL revolutionize military technology.

I’ve been a student of military issues and technology for nearly 40 years — 31 of them associated with the U.S. Navy, on active duty and in the Reserve. I’ve been around big systems, big technology, big procurements and big money. And I have to confess that this next era of military technology is hard even for me to characterize.

Or think in terms of how the USS Monitor and CSS Merrimack (aka Virginia) changed the nature of warfare on one afternoon on March 8, 1862, when the two “ironclad” ships shot it out at Hampton Roads.

Ed. Note: Byron has identified a truly incredible way to profit from the military tech sector he refers to at the end of this essay. And readers of The Daily Reckoning email had a unique opportunity to find out exactly what it was. Don’t miss out on this and all the other incredible investment opportunities featured in The Daily Reckoning. Sign up for free, right here.