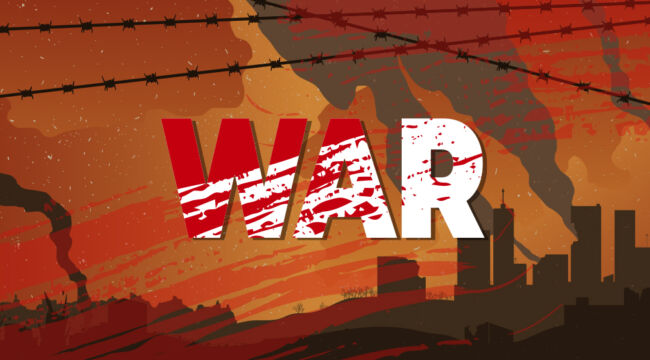 “A superpower declared war on a great power and nobody noticed.”

This is the studied conclusion of journalist Edward Luce, unfurled in a recent Financial Times column.

The war-declaring superpower in this instance is the United States. The declared-against great power is the People’s Republic of China.

The PRC… is the only competitor with both the intent to reshape the international order and, increasingly, the economic, diplomatic, military and technological power to advance that objective…

A Polite Declaration of War

These are confrontational words, you say, perhaps instigating words — yet not fighting words. Where is the war declaration?

This Luce fellow argues it is there. It exists in subtle and coded form; behind, beside, beneath and between the written lines.

Only the discerning and nuanced eye can penetrate the fogs surrounding the official text.

Yet to this practiced eye… the war declaration is clear as a mirror, clear as gems.

This eye sees clearly that:

The new restrictions are not confined to the export of high-end U.S. semiconductor chips. They extend to any advanced chips made with U.S. equipment. This incorporates almost every non-Chinese high-end exporter, whether based in Taiwan, South Korea or the Netherlands. The ban also extends to ‘U.S. persons,’ which includes green card holders as well as U.S. citizens.

China — of course — requires these advanced technologies to get along. To deny China these technologies is like denying a man oxygen.

On export controls [against China],we have to revisit the long-standing premise of maintaining ‘relative’ advantages over competitors in certain key technologies. We previously maintained a ‘sliding scale’ approach that said we need to stay only a couple of generations ahead. That is not the strategic environment we are in today. Given the foundational nature of certain technologies, such as advanced logic and memory chips, we must maintain as large of a lead as possible…

[Sanctions against Russia] have demonstrated that technology export controls can be more than just a preventative tool… they can be a new strategic asset in the U.S. and allied tool kit.

Will China submit to the strangulation planned against it — or might it strike out preemptively against its would-be strangler — to keep the violent hands off its throat?

Mr. Niall Ferguson professes history at Harvard University. He is also a Daily Reckoning reader, incidentally, as he confirmed to our co-founder Addison Wiggin some years ago.

He also likes to write books. These include:

The Ascent of Money: A Financial History of the World… The War of the World: 20th-Century Conflict and the Decline of the West… Colossus: The Rise and Fall of the American Empire… to name some.

Thus he maintains a great store of knowledge in his locker.

In brief, he is monitoring the stock very closely. That is because Ferguson sketches warnful parallels between 1939–1941 Japan and 2022 China…

Prior to the Second World War, over 80% of Japan’s supply shipped in from the United States. Japan’s economic machinery would seize absent the American lubrication.

Yet in August 1941, the United States government embargoed all oil and gasoline exports to Japan.

That is, the United States chose to strangulate Japan.

Will China Pull Its Own Pearl Harbor?

How Did Japan take it? By striking out against the United States before the strangulation could work its lethal effects.

It simultaneously proceeded against the Dutch East Indies and its vast oil stocks. The United States embargo had forced Japan’s hand, as the phrase runs. Ferguson:

[It] might be a repeat of the mistake the U.S. made with Japan between 1939 and 1941, when economic sanctions so boxed in the imperial government that in the end there seemed no better option than to gamble on surprise attack…

Cutting China off from high-end chips today seems a lot like cutting Japan off from oil in 1941. And it is an especially hazardous move when more than 90% of the production of those chips takes place in Taiwan, an island that China claims as its own.

Will China attempt the same preemptive blow as Japan in 1941? We do not pretend to know.

Conventional jousts in the Taiwan Strait could lead to nuclear jousts between the warring nations. Thus the nuclear deterrent may well keep the swords in their sheaths, the guns in their holsters… and the saner heads prevailing.

That is our earnest hope.

China may also determine it can outfox the technology embargo, that it can get its hands on technologies regardless.

It need not resort to warfare, that is.

The Biden administration would not be the first Democratic administration elected on a progressive domestic program that stumbled into a major war: Woodrow Wilson, Franklin D. Roosevelt, Harry Truman and Johnson — they all did it. The record is: won two, tied one, lost one.

This publication is stridently, dogmatically and ruthlessly anti-partisan. Yet we harbor little faith in the generalship of the present Democratic administration.

And as the great Mencken observed wryly, returning to our amorous/martial analogy: Both love and war are easy to start — but very hard to stop.

Is it evidence you need? Evidence that wars are easy to start but very hard to stop?

We refer you simply to Mr. Vladimir Putin, president of Russia. Ask him.