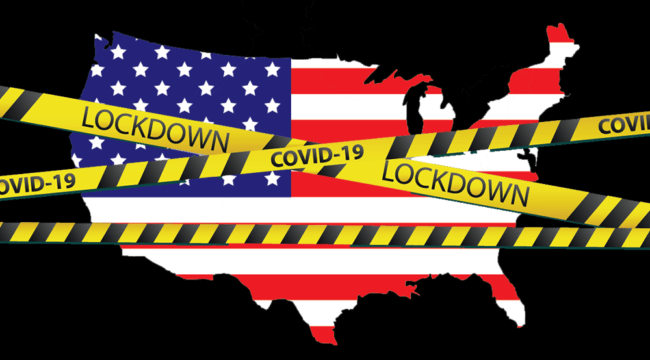 Horror succeeds horror… the virus is once again amok.

The United States reported over 145,000 fresh cases Wednesday — a record. We are told daily fatalities near 2,000.

A vaccine is not yet ready. What, then, is to be done?

A four-to-six week national “lockdown” — with little room for escape?

If the man from Delaware seizes the White House… as expected… you may have one.

May we introduce you to Dr. Michael Osterholm?

Mr. Biden has appointed him to his “special coronavirus transition advisory team.”

A nationwide lockdown would drive the number of new cases and hospitalizations down to manageable levels while the world awaits a vaccine.

“As Comprehensive and Strict as Possible”

In the good doctor’s telling, the previous lockdown was a minimum security jailing. Inmates were granted excessive freedom of movement.

He instead would impose a maximum security imprisonment.

Inmates must confine themselves to their cells unless absolutely necessary. Many would naturally face solitary confinement.

Yet it is necessary to halt the virus, he insists. Dr. Osterholm (from a joint New YorkTimes column with Minneapolis Federal Reserve President Neel Kashkari):

The problem with the March-to-May lockdown was that it was not uniformly stringent across the country. For example, Minnesota deemed 78 percent of its workers essential.

To be effective, the lockdown has to be as comprehensive and strict as possible.

“As comprehensive and strict as possible.” Meaning, gentlemen?

We should mandate sheltering in place for everyone but the truly essential workers. By that, we mean people must stay at home and leave only for essential reasons: food shopping and visits to doctors and pharmacies while wearing masks and washing hands frequently.

Just so. We were informed in March that a two-week jail term would scotch the bug. Yet the jailing was repeatedly extended.

“We can’t risk opening too soon,” will be the renewed refrain.

What about the vicious economic carnage that would result — even greater unemployment, more shuttered businesses, shriveled local tax bases?

We could pay for a package right now to cover all of the wages, lost wages for individual workers for losses to small companies to medium-sized companies or city, state, county governments. We could do all of that. If we did that, then we could lockdown for four-to-six weeks.

We can? We can cover all the lost wages for individual workers, losses to companies small to medium-sized, losses to city, state, county governments?

“We” will find it nowhere because it does not exist. It must be fabricated, conjured into being at a keystroke.

And so the nation would plunge deeper and deeper into debt.

Is it necessary? Under lockdown conditions we suppose it would be.

But is a lockdown justified by the facts? Answer shortly. First, an observation…

The Economy Is Not a Machine

Here is the invisible assumption behind lockdowns: Wise men can comatize an economy for weeks or months, then jolt it awake on command.

It will proceed to purr, throb, bristle… as if a six-week coma factored nothing at all.

But an economy is not a soulless, inert machine. It will not be switched off and on as the wiseacres please.

It will not bend to their wrenches, hammers, screwdrivers and drills. The implements are too crude.

The economy instead is a dynamic organism… with a dizzying riot of arteries, veins and capillaries… jungles of interconnected nerves… ligaments and tendons… bones and muscles.

Its infinite complexity eludes the mechanic with his simple tools. And an extended lockdown risks serious, potentially lethal, economic damage.

But do lockdowns even work — as their boosters claim they work?

Kicking the Can Down the Road

The likely answer is no. They may delay infections. But they do not prevent them. The virus will pounce once the inmates are freed.

And so lockdowns merely boot the beer can down the street. They only prolong the pandemic.

Everyone will be exposed to severe acute respiratory syndrome coronavirus 2, and most people will become infected. COVID-19 is spreading like wildfire in all countries… There is very little we can do to prevent this spread: a lockdown might delay severe cases for a while, but once restrictions are eased, cases will reappear. I expect that when we count the number of deaths from COVID-19 in each country in 1 year from now, the figures will be similar, regardless of measures taken.

Measures to flatten the curve might have an effect, but a lockdown only pushes the severe cases into the future — it will not prevent them… our most important task is not to stop spread, which is all but futile, but to concentrate on giving the unfortunate victims optimal care.

Next, we come to Professor Graeme Ackland of Edinburgh University:

Unless a vaccine magically appears and is rolled out across the entire population in the next six months, then shutting down society is unlikely to reduce overall deaths. Lockdowns essentially just postpone these deaths and prevent immunity building up… in some cases resulting in more deaths long term. The way out of any epidemic is herd immunity, which is when enough people in the population are infected that the virus can’t spread. We need to focus on protecting older people who are going to be affected by coronavirus, not people who aren’t.

Higher mortality rates, that is, than in lightly restricted countries without the heavy hand.

Consider brave little Sweden. She was roundly denounced for leaving her economy largely open… resulting in needless misery and death.

Yet through October 10, the data inform us that:

Sweden’s COVID mortality rate was 583 per million. And the heavily bolted down countries?

That is, each exceeds heartless Sweden’s.

And what of the death and suffering lockdowns have wrought?

The Other Side of Lockdowns

We must next consider the unfortunates who succumbed to otherwise treatable maladies… because they failed to receive adequate treatment under lockdown conditions.

Do these lives matter — the suicidal, the overdosed, the diabetic, the heart-diseased, the demented?

Many hazard that lockdowns will murder more victims than the virus itself. They are the invisible victims.

They do not make the news. They serve no political interest. No “dashboard” tracks their demise.

Regardless… we suspect renewed lockdowns are in prospect… especially if Mr. Biden wins his race.

Yet one question lingers in the air: Will a frustrated American people go along this time?

Many are in a foul frame of mind these days…