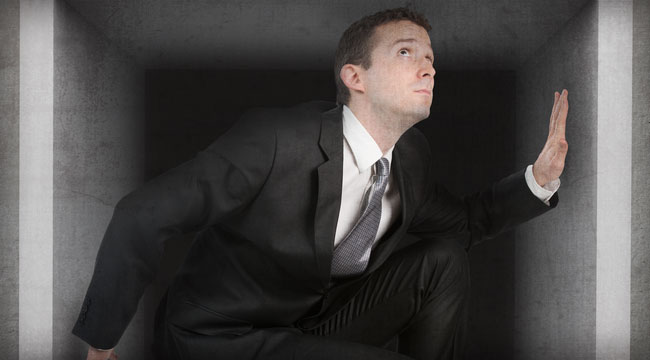 A Simple Way to Escape the Most Difficult Financial Traps

The price may be in time, effort, money, emotional turmoil, or physical discomfort. It always comes back to time, however. You aren’t going to live forever, so time is a limited resource.

Whatever you do with your time, you pay a price by forgoing other alternatives — other things you could have done with that time. That’s why you choose; you hope to satisfy your highest values and let the others go.

A key to good decision-making is the ability to recognize what you’re giving up when you choose something. It’s obvious that you can’t have everything you desire. But often, when choosing to do something, you can overlook the desirable things that you’ll have to forego because of the choice you’re making.

So it’s important to recognize what you’re giving up and to make sure that what you’re getting is more valuable to you than what you’re foregoing. If you do that, you’re less likely to have mixed emotions later when the other things appear desirable to you.

In effect, a box is any situation that restrains your freedom. As long as you stay in it, you suffer a discomfort of some kind and you forego other alternatives that are more desirable to you.

The box could be a bad marriage, an unpleasant occupation, a debt for something of no value to you, or a social obligation of some kind. A box can also be the problems involved in maintaining an image or reputation that isn’t genuinely yours — such as having to watch what you say.

No matter what the discomfort, there’s always a price you can pay to get rid of it.

You’re in the Box Trap if you tolerate any such situation by assuming there’s no way out of it. The first thing to recognize is that you’re paying a price every day you remain in the box. You’re foregoing more attractive alternatives. And you suffer discomfort just from knowing that you don’t like the situation, plus the discomfort of whatever you have to do to keep from rocking the boat.

The second thing to recognize is that there is a way out. To get out, you have to pay a price. The price may be in emotional upheaval, in money, in time spent to make things right. Whatever it is, there is a price you can pay to get out.

Part of the problem is usually the vagueness of the situation. It’s easy to assume that the cost of getting out is too horrible to contemplate, and so you don’t even think about it directly. As a result, you can go on living daily in a box without ever knowing exactly what it would require to get out.

If you could know specifically what you’re paying by staying where you are and what you would have to pay to get out, you could make a definite choice. You’d know which alternative was truly best for you.

If there’s a box in your life (big or little), let me suggest a simple method of putting it in focus. Take a few minutes away from everything else. Find a comfortable chair in a quiet room where you can consider the problem without interruption.

As long as the situation is just a hazy problem with no solution, it can always seem easier to let things continue unchanged — as uncomfortable as it may be. But when you recognize what it’s costing you to stay in the box and what you could do if you were out of it, you gain new incentive to do something about it.

The price of getting out might have seemed horrendous when viewed vaguely from a distance. But now that you’ve identified it clearly, it may lose its power to frighten you. That won’t necessarily happen in every case, but it is likely enough to be worth checking.

In most cases, a half hour spent in this way will lead to the conclusion that it’s easier to pay the price and get out than to stay locked in the box.

No matter what the discomfort, there’s always a price you can pay to get rid of it.

Suppose you’ve acquired a debt for something you bought that you really don’t care for anymore.

Each month you have to write out a check for money you’d much rather use elsewhere. It can be a monthly torment — a symbol that you’ve made a costly mistake.

Why put up with it? There’s always a way out.

Maybe you have twenty payments left. If so, don’t take the attitude that you have to endure this discomfort for twenty more months. There’s a price available that will end it now.

See what you can sell the item for. Don’t fall into the previous investment trap by thinking you can’t take a loss on it. You only increase your losses — in money and emotional distress — by hanging onto it.

The outstanding debt may be more than the amount you could sell it for. If so, why not pay the difference in cash and get rid of the problem? Or sell something else you don’t need to make up the difference.

You don’t gain anything by waiting the twenty months. By then the item will be worth even less, so you’ll simply lose more money by hanging onto it. Sell it now, pay the difference, and end the problem. Then you won’t have to write those monthly checks anymore.

However you handle an irritant, there’s no reason to assume you have to endure it just because you’ve made a mistake. There’s always a price you can pay to clear the record and start fresh…

Cultivate the art of looking for prices anytime you notice a discomfort. Find out what it would take to be rid of it; there’s always a way. If the first price you discover seems too big to be worth it, think about it some more; perhaps there’s an easier way.

Once you get into the habit of looking for prices, you’ll realize that any irritant in your life can be handled. You’ll no longer tolerate that slow, chronic discomfort that eats away at you daily — destroying your incentive, making you think less of yourself, darkening your attitude toward the world.

As you develop this talent, you can move up gradually to the bigger boxes in your life, dealing with them in the same way.

I’ve never found an exception to the rule that the sooner you pay a price, the less it costs you.

And one day you might wake up to realize that there isn’t anything hanging over your head. You’re free! — free to approach the day as you want to live it, not restricted by the chronic problems that other people take for granted.

No matter how long a situation continues, there’s always a way to get out. But the sooner you handle it, the easier it is.

So many people live in chains of their own making. They cry out for freedom from political policies they don’t like; they complain about the villains who prevent them from being free. And all the time they voluntarily tolerate boxes that reduce their freedom of action by 20 to 50% or more.

Getting out of boxes may not get the politicians off their backs. But if freedom is so important to them, why don’t they remove the chains that are within reach?

Take a look at your own life. What could you do today that would give you more freedom tomorrow morning?

If the hours required to earn the money to pay taxes are vital to you, then what about the hours you spend in uncomfortable relationships?

Every dollar or hour you stop spending to preserve a box is one you could be using for better things. Every day outside a box is another day added to your free life.

In addition, when you get out of those boxes, you’ll be much freer to take advantage of opportunities that will free you in other areas — such as removing the political chains from your back.

As I’ve mentioned you’re often prevented from using an attractive alternative in one area because you’re restricted in another. When you’re no longer deep in debt or stifled for time by bad relationships, you can take advantage of the many alternatives available to get rid of high taxes and political repression.

The nice part of it all is that you can get out of boxes just by exercising your own initiative. It’s a direct alternative that doesn’t involve influencing others. All you have to do is pay the price.

Instead of worrying endlessly about a vague, ominous threat, face it mentally. Get off by yourself, relax, recognize what you’re paying already, discover what you could pay to be rid of it, picture yourself paying it. And when it no longer frightens you, pay it and be free.

There are always prices. You pay them whether you change things or leave them alone. The price that gets you out of a bad situation is by far the least expensive one. It’s usually far less terrifying than it was when you let it scare you from a distance.

Pay it. You have nothing to lose but your boxes.

Harry Browne
for The Daily Reckoning
1973

Ed. Note: Now that you’ve read Harry’s piece, you have a choice. Will you take action to escape the box trap or not? We’ve researched 101 simple and legal ways to reclaim liberty in your life and published them in one simple book. It’s called A Man’s Right to Happiness, and in today’s FREE email edition of The Daily Reckoning, readers got an exclusive opportunity to grab a copy for themselves for just $7. In addition, readers were also treated to a full section that put Harry’s essay in perfect context with events going on right now, as we speak. In short, if you’re not getting the Daily Reckoning email edition, you’re not getting the full story. Sign up for FREE, right here, and never let that happen again.