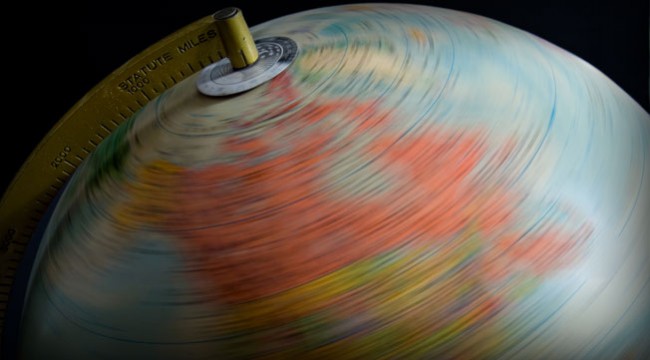 A New Spin on the Old Oil War

One of the main stories not being told about today’s oil market is the next round of turbulence set for the Middle East. It’s the oil war scenario, but with a new spin.

Last year when Byron King and I attended the Platts Crude Oil Conference, a main takeaway was an interesting OPEC break-even chart that shows how much money OPEC nations need to keep their governments funded. Take a look: 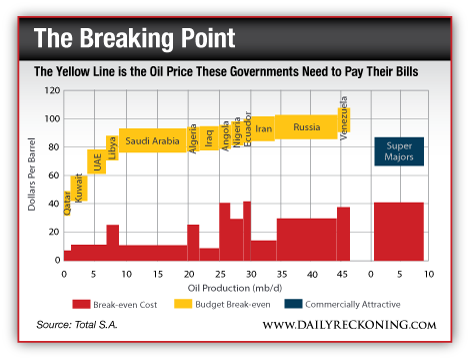 This year at the Platts oil conference, we saw two clear themes:

1. The U.S. oil boom is bigger than expected. As I see it, this is more of a “duh” observation. I’ve yet to see it slow down since 2008. In fact, this week, the International Energy Agency (IEA) in its Oil Market Report claimed that America’s shale boom is growing even larger than expected. It’s also set to have a profound effect on OPEC. Which brings me to the second theme…

2. OPEC is also set to produce (or have the capability to produce) a heckuva lot of oil. One main driver of that supply growth is Iraq. After a turmoil-filled decade, Iraq is coming back on line in a big way — and could add another 3 million barrels per day to the oil mix by 2018.

So you see, once you start lumping together all of this oil, the market seems a bit flush.

OK. So the U.S. has lots of oil, and we’re producing it at an ever-growing rate. And OPEC has a lot of oil and is either producing it or sitting on it.

And what’s funny is that if OPEC continues to cut supply via quotas, all it will do is help the U.S. oil boom. They’ll essentially be crimping supply to boost prices… and we’ll benefit. Hah!

So how does all this shake out?

From my perch, oil prices are set for a fallout. When I questioned some of the speakers at the Platts conference this week, there were only two “good” answers for why oil prices are still high.

The first is just a simple “fear” premium — the Middle East is still a big producer and fear is built into the price of oil (that begs the question: Do we really need $20-45 of fear premium?).

The second reason prices are still stubbornly high, I’m told, is that central banks are still printing money. Again, I’m not sure this is enough to demand $95 WTI oil — heck, just look at other commodities, like gold (where’s the support there?). But at least it’s somewhat of an explanation. The Fed and the BOJ are printing away, and it’s probably only a matter of time before the ECB joins in.

You can take what you want from those two reasons — but that’s all I’m hearing about oil’s current price support.

I’m still looking for a price drop. When you’ve got a room full of 200 smart oil insiders, most of whom are scratching their head at current high prices or grasping at straws, something’s got to give.

When that happens, prices could drop and remain under pressure for a while — I’d look for stability around $80, but we could easily see oil trade below that. The break-even price for most American shale plays is around $50-60 — so don’t expect prices to fall much below there — but overall prices are a little lofty above $90.

Getting back to my point above, OPEC needs $100 oil. Member nations have become accustomed to a certain level of income rolling into their coffers. As the oil money rolls in, it’s quickly spent on government programs. But what happens if they start checking the books and see 20-40% less income? All bets are off. Indeed, we’re setting up for the next Middle East meltdown.

A closer look reveals that the Saudis aren’t happy that Iraq is coming online. This could lead to a round of infighting among OPEC — with each nation trying to eke out the most money. Frankly, the Saudis have massive incentive to see Iraq fail. The same goes for Iran. Will that lead to anything? Who knows?

In the meantime, we wish OPEC luck dealing with $80 (or cheaper) oil!

So there you have it. Today’s oil market has boiled down to some pretty simple inner workings.

The U.S. and OPEC are set to produce much more oil. And even though U.S. and Euro demand for the black goo is falling, demand from the oil-thirsty East is set to ramp up.

So we’ve got plenty of demand and at least a five-year window of shale gale-spurred supply.

In the short term, I expect supply to outrun demand — something that will lower prices across the board. And along with those lower prices, we’ll see some squirming from OPEC.

Will the government let the coffers run low and cut government programs? Or will the member nations decide to open the spigots and produce more quota-breaking cheap oil to keep the money rolling in?

Either scenario holds a drop in the market price for oil. And either scenario ends poorly for OPEC. Stay tuned. The next few months could get interesting.