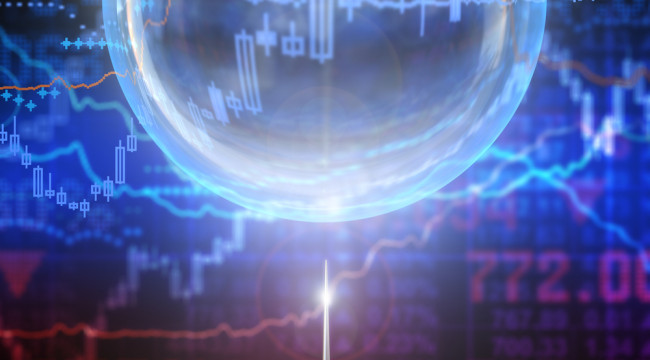 A Multi-Decade Credit Bubble Is Coming To An End

Crude has rallied about 5% off of last month’s low. The Brazilian real closed Friday at 3.90, having posted a decent rally from the January closing low of 4.16 to the dollar. Brazilian equities have bounced about 10%. This week saw Brazil’s currency rally 2.4%. In general, EM currencies and equities have somewhat stabilized, notably outperforming this week. Stocks posted gains in Brazil, Turkey and China. From Bloomberg: “Yuan in Longest Weekly Rally Since 2014 as China Raises Rhetoric.” The dollar index this week dropped 2.6%, which most would have expected to lend some market support.

If crude, commodities, EM, the strong dollar and the weak yuan were weighing on global market confidence, why is it that global financial stocks have of late taken such a disconcerting turn for the worse?

February 4 – Bloomberg (Tom Beardsworth): “European banks and insurers’ financial credit risk rose to the highest in more than two years, following a $5.8 billion loss at Credit Suisse Group AG and signs of a slowdown in the global economy. The cost of insuring subordinated debt climbed by 19 bps to 254 bps, the highest since July 2013, based on the Markit iTraxx Europe Subordinated Financial Index. An index of credit-default swaps tracking senior financial debt jumped six bps to 110 bps. Both indexes have risen for six days in a row…”

Why didn’t the weaker dollar this week support financial stocks – and equities more generally? For one, long dollar is perhaps the most Crowded Gargantuan Trade around. And those EM currencies and equity markets outperforming this week had become popular shorts. With the leveraged speculating community now under intense pressure, there’s especially low tolerance/capacity for pain. It’s one eye on the exit time. At this point, rather than supporting stabilization, dollar weakness spurs further de-risking/de-leveraging – commodities and EM not withstanding. It’s reached the point where there is almost no place to hide. In the mirror image of financials, gold stocks are rather abruptly transforming from Crowded short to coveted store of value (HUI up 22% this week).

Financial stocks have mutated from market darlings to shorts. Such sensational shifts in market psychology are devastating for stock prices, market confidence and liquidity more generally. As “Risk Off” appeared to attain critical momentum, this week saw heightened panic out of Crowded favorites. The Nasdaq 100 (NDX) fell 6.0%, increasing y-t-d losses to 12.4%. The biotechs (BTK) sank 5.4%, raising 2016 losses to 28.1%. The Morgan Stanley High Tech Index was hit 7.2% (down 15.7% y-t-d). The small cap Russell 2000 lost 7.2% this week (down 13.2% y-t-d).

The ongoing worldwide collapse in financial stocks provides powerful support for the bursting global Bubble thesis. After a brief respite, this week saw contagion effects return with a vengeance. Last year’s commodities and EM downfall anticipated the faltering Chinese Bubble. These days, “developed” markets have begun to discount the vulnerability of Europe, the U.S. and the rest of the world to Bubble contagion effects originally emanating from the China/commodities/EM downturns. The dominos have started falling.

Few are yet willing to accept the harsh reality that the world has sunk back into crisis. The VIX ended the week at a somewhat elevated but non-crisis 23.38. Credit spreads have widened meaningfully but for the most part remain at a fraction of 2008 crisis levels. Indeed, markets remain hopeful that “whatever it takes” central banking is waiting in the wings to trigger rallies at the moment things turn disorderly. My view that crisis has reemerged is based on the analysis that de-risking/de-leveraging dynamics have reached a point of self-reinforcing momentum beyond the control of central bank policies. In short, The Adjustment Cycle has commenced and there’s little left at this point to hold it back.

Marking down Chinese debt to a more reasonable level will leave a gaping hole – in bank capital, in government finances and in household savings. This will set back China’s transformation from production to a services/consumption-based economy by decades. Mark down European debt and asset prices to sensible levels and the banking system is insolvent and Europe’s economy is right back in the ICU. Indicative of a faltering Bubble, European periphery spreads widened significantly this week (Greece, Portugal, Italy and Spain). Europe would be in much better shape today had it taken its medicine in 2012.

The U.S. economy has been perceived as the envy of the world. The bulls must be watching the big financial stocks in complete disbelief. I would argue that the U.S. has among the widest divergences between inflated financial wealth and deflating real economy prospects. It’s worth noting that Amazon and Netflix have lost more than a quarter of their value over the past five weeks. LinkedIn dropped 44% Friday.

The unfolding adjustment cycle will be especially burdensome for beloved companies that generate little or no profits/cash flow – and the Bubble has cultivated scores of them. And as equities prices and wealth deflate, faltering profits will soon follow. Industries, companies, combinations, entities, deals and structures – that looked fruitful in the age of abundant cheap finance and risk embracement – will now be viewed through a gloomy prism. Bond and derivatives investors will become much more cautious. Financial conditions will tighten significantly.

There’s a reasonable probability that global Credit growth is moving toward the weakest expansion in at least 60 years. U.S. Credit growth will be the weakest since at least 2009. And while Credit growth has slowed markedly in the U.S. over the past year, securities and asset prices (“perceived wealth”) over this period were bolstered by unprecedented international flows. “Money” has been fleeing China, EM, euro & yen devaluation, and the world more generally. At the same time, I suspect that hundreds of billions of leveraged speculative flows inundated “king dollar” U.S. securities markets.

This week had a king-dollar inflection point feel to it. There’s a problematic scenario that now seems a relatively high probability: De-leveraging/de-risking sees a reversal out of king dollar, while already tepid Credit growth slows sharply as markets falter and risk aversion takes hold. Financial stocks have already begun to discount this type of quite problematic backdrop for U.S. securities and asset prices. A disorderly unwind of leveraged positions concurrent with selling from derivative-related “dynamic” hedging programs would ensure market illiquidity and dislocation. And such a scenario could easily unfold concurrently on a global basis.

Kuroda was badly mistaken if he believed negative rates would weaken the yen (for more than hours). In a world of de-leveraging, there’s a strong case to be made that negative rates are worse than doing nothing. I’m assuming more QE will be forthcoming – from all major central banks. That’s certainly what the Treasury, JGB and bund markets are telegraphing.

Candidly, I don’t enjoy writing in these circumstances. It’s reminiscent of the buildup to the 2008 market crash. It wasn’t entirely clear how things would unfold back then, but I knew tens of millions would be badly hurt. Nowadays I fear for hundreds of millions, and the associated geopolitical… So far, the public hasn’t panicked. Why would anyone sell now when stocks always recover? The Adjustment Cycle is just getting underway.