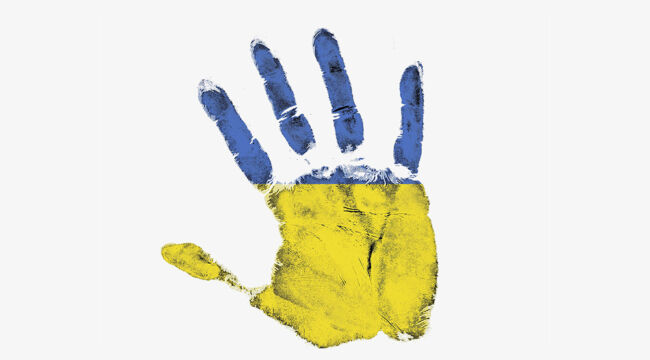 A Miracle in Ukraine

Today we are dumbstruck. We are awestruck and thunderstruck…

We now know, despite all contrary evidence, that the living God is with us — even in this godless age.

For what we have observed is no dime-store or magician’s miracle — but an authentic miracle — true as gold, true as the stars.

What is this miraculous impossibility?

A dead Ukrainian man, Russian-killed, enshrouded in plastic, days dead, junked beyond recall and ticketed for the boneyard… has risen to life.

It is true: A dead man has risen to life — not figuratively — but literally. Christ has blown life into a 2022 Lazarus.

Lest you question our account, here is your proof:

Is the Resurrected a Daily Reckoning Reader?

Can you believe it? Are you now convinced?

Yet one question lingers in the air: Why would a man resurrected miraculously attempt desperately to conceal the fact?

Where is his joy?

Perhaps he is a reader of The Daily Reckoning. Thus he may have concluded that this world is not worth a return… and that he is better off dead.

As one character in an Aldous Huxley work asked: “How do you know that the Earth isn’t some other planet’s hell?”

We can merely speculate of course.

Yet we are confident the Ukrainian government will attempt to seize this fellow’s resurrection as proof. Proof, that is, that God is with them and against the hellcat Russians.

What does it matter if the heroic defenders of Snake Island did not perish… but surrendered to Russian naval forces?

What does it matter if the Ghost of Kyiv did not shoot six Russian airplanes from the sky in a single day — or if he even exists?

God himself has declared himself for Ukraine. And if God is for Ukraine, who can be against Ukraine?

In reality, the above video was filmed not in wartime Ukraine… but in peacetime Austria… at a protest against climate inaction.

The “news” source merely seized this video to sketch a scene of Russian villainy.

It was conscripted into the service of a noble lie.

Truth, of course, is war’s opening casualty. Propaganda immediately takes its place upon the battlefield.

A Bodyguard of Lies

Ideas, facts or allegations spread deliberately to further one’s cause or to damage an opposing cause.

But propaganda in wartime is necessary, you say. After all: Churchill argued that “in wartime, truth is so precious that she should always be attended by a bodyguard of lies.”

It is true. Mr. Churchill did say it.

Let wartime truth have its mendacious bodyguard then. It may be necessary. We will not dispute it.

We merely request that you acknowledge your clutching embrace of Plato’s “noble lie.”

An actual enemy may not in fact sport devil’s horns and a forked tail. He may be a decent fellow, pleasant in nearly every respect.

Yet a people may not wish to clobber a decent fellow with whom they may quarrel over some particular.

They will — however — fling themselves onto distant battlefields to clobber a devil. And so they must be informed the enemy is a devil, up from hell.

For example: The Allied peoples were told the Kaiser’s soldaten bayoneted Belgian babies during the First World War.

There is no credible evidence they did.

There are many kinds of maneuvers in war, some only of which take place upon the battlefield… There are maneuvers in time, in diplomacy, in mechanics, in psychology… and the object of all is to find easier ways, other than sheer slaughter, of achieving the main purpose… The maneuver which brings an ally into the field is as serviceable as that which wins a great battle.

Roosevelt — Franklin Delano — raged against Japan’s dastardly and unprovoked attack the morning prior.

Yet was it entirely unprovoked?

Over 80% of Japan’s supply shipped in from the United States.

Officials knew well that Japan might take a desperate armed lunge in response. These men believed war was all but assured.

But it was critical that Japan deliver the initial blow… to incense and inflame the American public. Here we speak by the book:

“My first feeling was of relief… that a crisis had come in a way which would unite all our people.”

Thus the “unprovoked attack” was a noble lie of sorts.

As we have written previously: Prior to Pearl Harbor, the United States Navy had been initiating jousts against German U-boats along the Atlantic convoy routes.

Was the United States a neutral power prior to December 1941? And did razzing German U-boats constitute a breach of this neutrality?

We leave the answer to you, our beloved reader.

Many historians will tell you Mr. Roosevelt was attempting to lure the Germans into another Lusitania trap.

The fellow was hot for war in Europe. Yet the great bulk of the American people were against it.

If the hell-sent Nazis slammed torpedoes into American sailors, the public might begin to notice Herr Hitler’s horns and tail.

But the German leader spotted Mr. Roosevelt’s shiny hook from which the tasty worm dangled.

He ordered his men to avoid all tangles with vessels flying the neutral flag of the United States.

He read any U-boat man who gobbled the American bait a severe lesson — even though in strictest defense, even though Roosevelt’s men punched first.

A Noble Lie Is Still a Lie

Examples multiply and multiply. Again: A bodyguard of noble lies may serve their wartime  purpose. The business may be necessary, and likely is necessary.

And let us declare it at once: We are not with Mr. Tojo or the little Austrian corporal.

We merely rush to the aid of war’s first battlefield casualty — truth.

A noble lie is nonetheless a lie. And we dislike having lies drummed into our skull, however noble.

We especially dislike those doing the drumming…