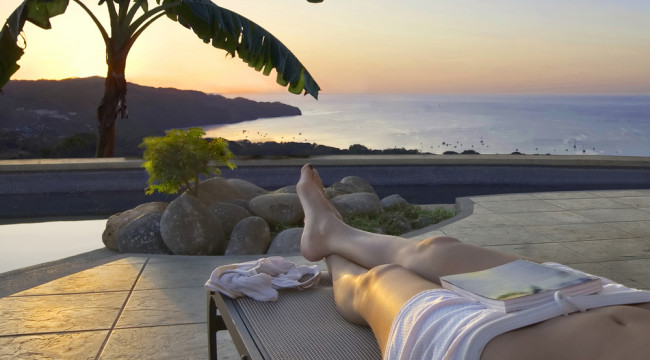 It’s a line you hear a lot on Costa Rica’s southern Pacific coast. “We thought about Panama—we almost bought in El Valle. Then we came down to Costa Rica’s Southern Zone and fell in love. We made an offer on a lot on our first three-day trip to the area,” says Russ Miller, 65. “I don’t recommend most people do it that way, but we’d done a lot of research.”

“Meeting the people here cemented our decision,” says his wife Cindy, 55. It was the perfect setting for the non-traditional retirement the couple craved.

“I started thinking about retiring overseas about 10 years ago. I had always thought we’d stay in California, but one day I was at the golf club and saw all the retired guys that were there all the time,” explains Russ. “I didn’t want to do that for the rest of my life. It’s good for some. But we wanted something different.”

“Anybody who has come down here is a different personality…there’s a camaraderie.”

A sparsely-developed area, the Southern Zone is about a three-to four-hour drive from the country’s capital, San José. It’s a still-wild area—there are more toucans than tourists.

But in the past several years it’s quietly become an expat destination. The landscape is dominated by the rugged beauty of palm-lined beaches with jungle-covered hills and mountains looming behind. On one of those hills, near the town of Ojochal, lies the Miller home. To get there, you drive about 20 minutes up on a rough dirt road. The altitude gives it a sweeping view of the Pacific and surrounding mountains. It’s surrounded by tall jungle trees and vegetation.

They were delighted to discover shortly after moving in that two-toed and three-toed sloths, howler monkeys, and toucans would be frequent visitors there. Their back terrace, which overlooks the Pacific, is the perfect spot for wildlife-watching in the surrounding trees. Armed with a telephoto lens, Cindy has discovered she’s got a knack for wildlife photography.

The home is built to their specifications. Floor-to-ceiling glass sliding doors remain open throughout the day, letting in the cool ocean breezes. The Millers, from Pittsburgh originally but living in the Bay Area for many years, say they rarely use air conditioning. At 3,000 square feet, the house is large enough for their frequent family visitors. The large back terrace is made for outdoor living, with comfy couches and loungers. And, of course, there’s a swimming pool.

“Russ’s dream was an infinity-edge pool with a view,” says Cindy. After they bought the lot three years ago, the Millers started the building process. Russ, an engineer and president of an engineering firm, did a lot of the initial design, with the developer adding the final details. They monitored construction through regular emails and phone calls, and with visits every three months to check on the progress as the lot was leveled and the building began.

The house was completed in July 2012. At $100 a square foot (the local rate for luxury finishings), the Millers paid $300,000 for the home. The lot was $165,000. Cindy says the appliances cost more than in the U.S., though they saved a lot (half of what they would have paid back home) on custom furniture made from locally-crafted tropical hardwoods. In general, they believe they got a real bargain for the home they ended up with.

“This home would be a couple of million in California, if not more,” says Russ. Cindy, fully retired from a long career as a registered nurse, stays full-time in Costa Rica. Russ travels back to the States regularly for work. But he’s able to get a lot done from his new home office. Outfitted with high-speed Internet, he telecommutes and has regular video conferences with his colleagues.

Not that Russ isn’t enjoying a slower pace. “If you look around the house, you’ll see no clocks. That’s because we’re never in a rush,” says Russ. “The daily grind of California melts away here.”

Cindy meets regularly with a group of 27 expat women at area restaurants. And the couple frequents local restaurant The Roadhouse, which has live music on Saturday nights.

The area is quiet. “If you like city life, this isn’t the place to be. You have to like solitude,” says Cindy. But even in the jungle, there are big-city touches, too. Russ and Cindy love to try cuisine from around the world in nearby Ojochal’s gourmet-restaurant scene. And there are plenty of imported U.S. items in the local stores, though the Millers try to stick to local foods as much as possible.

“If you want to buy all American stuff, your food costs will be just as expensive as back home,” says Russ. “But if you buy local, you can keep your costs down. You have to choose your lifestyle. We treat ourselves now and then.”

The couple has made fast friends here. “It’s not your average person who’s going to live in the jungle,” laughs Cindy. “Anybody who has come down here is a different personality…there’s a camaraderie,” says Russ.

And after a year in Costa Rica, they know they’re here to stay. “I was in my home in California for 30 years, and I was really missing it at the beginning. But this feels like home now.”

Jason Holland
for The Daily Reckoning

P.S. To get a detailed, step-by-step look at how to build your own dream house anywhere in the world, see my 7 Tips to a Hassle-free Design and Building Process, right here.

Ed. Note: This essay was prominently featured in The Daily Reckoning’s Sunday edition – designed specifically to bring you the most interesting and investable ideas we can’t fit into the week’s regular issues. It’s just one more perk of being a Daily Reckoning subscriber. Don’t miss another issue or investment opportunity. Sign up for the FREE Daily Reckoning email edition, right here.