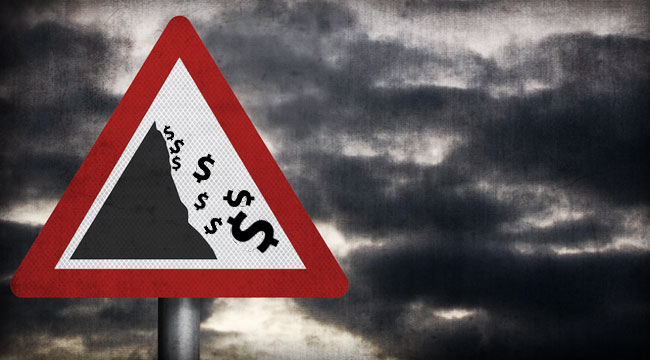 A Massive Tax Hike that Will Doom Us All

I can hear the family gathered outside, banging on the walls of the Mogambo Bunker Of Paranoid Hysteria (MBOPH), demanding that I unlock the door, come outside immediately, stop acting like a crazy person, and at least pick up the empty pizza boxes that I threw out into the yard, because the neighbors are complaining, and it looks so tacky, and blah blah blah.

Well, the neighbors may be complaining to each other about a few colorful cardboard boxes festively strewn randomly about, decorating the yard, but it is never to my face. No! Instead, I see the little cowards peeking out through their curtains, watching me, spying on me as I bravely secure the perimeter against invasions by rogue government agents, invisible helicopters and/or extraterrestrial creatures, all of whom have sinister purposes, which they would know if they ever read the news, knew the facts, or ever saw a science-fiction movie featuring “visitors” from outer space.

However, if I go marching over there and bang on their front doors, loudly demanding to know “Hey! What in the hell are YOU looking at? Huh? Why is this whole little nest of rats here always spying on me?” they always act real surprised and innocent, stammering as they deny it, the lying little creeps.

And if I ask a simple follow-up question, to expose their treacherous perfidy, like “So what in the hell do you want to learn about me, you stinking lowlife piece of Earthling garbage who is too stupid to buy gold, silver and oil when the entire historical corpus of human economic activity dictates that you do exactly That Very Thing (TVT) when the money supply is being increased So Freaking Much (SFM), So Freaking Fast (SFF) and for So Freaking Long (SFL), and who will end up broken and destroyed, starving in some stagnant, stinking gutter, ruined by the horrific aftermath of insane Keynesian economic theory and an evil cabal of the foul Keynesian-addled Federal Reserve and a low-IQ Congress intent on destroying America with it, so that the grotesquely gargantuan system of governments can send cash and benefits to literally half the population, as Absolutely Freaking Insane (AFI) as that must sound, even to a complete idiot like you?”, they always say, again, “We didn’t see anything! We’re sorry! Just don’t hurt me! Please don’t hurt me!”

And there is no reason for me to come out of the MBOPH in the first place. Inside here, it is safe and snug, with gold, silver and oil stocks on one side, cable TV on the other, tasty, salty snacks in one hand and a locked-and-loaded Uzi in the other, and my big fat butt settled into a comfy recliner chair.

While outside in the cold, cruel world, the G-7 is again meeting and discussing things economic, almost assuredly about the European Central Bank preparing to dump monstrously huge amounts cash and credit, in an filthy orgy of yet more Quantitative Easing idiocy, into the Eurozone. This will be a flood of money into the economy and the world over a period of years, desperately trying to cause inflation in the prices of the stock, bond, housing, and debt markets (“preventing deflation!”) in the short run, but certainly causing gigantic, ruinous price inflation in food and energy later, because price inflation always follows money supply inflation. It’s the law, people!

And it will certainly be no fun “out there,” outside the bunker with stupid people who are indignant and upset about a few lousy empty pizza boxes littering the landscape, when they should be terrified about widespread discontent, and massive food shortages and price increases, and rioting in the streets, and the world turning into a dark, murderous, post-Apocalyptic nightmare full of desperate, starving zombies selling their kidneys to get enough cash for a great cellphone plan and a new tattoo.

Another of the horrors that prevents me from facing the outside world I got from Rande Spiegelman, of Schwab Center for Financial Research, from whom we learn that, as seemingly part of some sneaky, sinister plan to destroy the USA by always doing the Exact Wrong Thing (EWT), there is yet another big ol’ brand-new tax!

The economy is collapsing, unemployment is rampant, prices are increasing, and yet we have a new tax on top of the other tax increases! Insane! Insane fiscal policy!

But this this not about how the insanity of tax policy matches exactly the insanity of Congress, but about this new “surtax on unearned income” on (for now) higher-income taxpayers, which Mr. Spiegelman handily encapsulates as “The Affordable Care Act will add a surtax of 3.8% on net investment income,” which is chillingly demonstrated by the tax maximums, which are, to wit, “With the new surtax, long-term capital gains and qualified dividends can be taxed at a top rate of 23.8% (20% + 3.8%), while non-qualified dividends interest and rental income can be taxed at a top ordinary rate of 43.4% (39.6% + 3.8%).”

That’s a 19% tax hike on the former, and a 10% tax hike on the latter! Yikes! Gigantic tax increases across a wide swath of the economy! What can you do except say “We’re Freaking Doomed (WFD)!” and laugh the horrible laugh of the damned and the doomed, a mirthless “Hahahaha!”, echoing doomed, doomed, doomed down dark tunnels to the dungeons of hell?

And the news just gets worse, as John Williams, of ShadowStats.com, calculates that unemployment, as measured in the REAL world, is holding at a heart-stopping 23.2%. Yikes!

Yet, somehow, Consumer Installment Debt just rose $27 billion to a massive $3.175 trillion in April, hitting another new, all-time record, which is scary enough, but which only partly explains why the monthly trade deficit was up a hefty $47 billion, while we had a deficit in the merchandise trade balance of $65.8 billion in April! This is all terrible news!

And it is not just me that sees it, apparently, as John Rubino of DollarCollapse.com has more bad news, in that “buying on margin,” which is a measure of speculative optimism about stocks, “hit a record in January, turned down in February, and is now falling hard.”

Not only that, but “interest rates are plunging,” indicating a fall in the demand for money, and “market breadth is contracting,” where, numerically, more stocks are falling than rising.

Probably noticing the look of horror on my face from the onslaught of this torrent of bad news, he stops, and sums up “The world’s governments are actively trying to inflate asset bubbles to make the average person feel rich enough to start spending again.”

Well, I have never felt rich, and I have a family that spends more than enough for everybody, so this doesn’t mean much to me. But, I can make it seem like we both agree with me that the stock market, the bond market, the housing market, the general debt market and the could go up from here as the result of increased government spending another tsunami of deficit-financed money flowing into the economy.

To prove it, I quote him as saying “One could make the case that the financial markets are responding rationally to the prospect of trillions of new dollars looking for a home in stocks and bonds (and high-end real estate and fine art and the other preferred assets of the 1%).”

My feeling smug that somebody agreed with me was a nice change of pace, but I was soon paranoid and scared again when he wrote, “What we’re witnessing, in short, is a truly fascinating attempt by the world’s major governments to suspend the laws that have, thus far in human history, governed economics.”

Laws! Laws of economics! It is just as I, The Great Mogambo (TGM), whose loud mouth and unlimited arrogance have always declared! To wit: Buy gold and silver (and oil stocks) with a special zeal when the government is actively abetting the Federal Reserve’s long-standing massive over-production of fiat currency and credit to finance suffocating fiscal monstrosities, because there are, indeed, as previously postulated, natural laws of economics! Laws!

Perhaps, in a flight of fancy, I could even philosophically and metaphysically surmise that these laws of economics were produced in the original Big Bang when the universe, and everything else in the universe, was created! How awesome! A truly closed system!

Anyway, one of these laws is that gold, silver and energy get very valuable during the collapse of a stupid economic system, like the current fad of laughable Keynesian economics, which actually proposes to replace consumer spending (that has stalled under the weight of too much debt caused by the evil Federal Reserve creating so much excess currency and credit so that the consumer COULD be buried alive under debt) with massive government deficit-spending, thus racking up staggeringly more Treasury debt that the consumer must pay, either in higher taxes or higher price inflation, and usually both! It’s beyond outrageous!

So, if you are like me and have already stopped reading this stupid essay long ago, and have gone off to see if you got any interesting email or casually surf some adult-content sites, we will both tragically miss this Timeless Law Of Economics Since The Big Bang (TLOESTBB), which is: Buy gold, silver and oil in a fiat-currency economy. You can’t lose! It’s the law of the universe!

So, almost breathless at the cosmic revelation, I breathlessly ask, “What else can I say?”

And how else could I say it, except with a gleeful giggle of irrepressible joy (“’Tee hee hee!’ he giggled gleefully in his joy, which was irrepressible”), and a loud, triumphant, rhyming roar of “Whee!”, followed by the everlasting truism “This investing stuff is easy!”?

Ed. Note: No matter how insane things get, there will always be a way to protect yourself. The Mighty Mogambo relies on gold, silver and oil. But there are more ways than that to safeguard your wealth. Sign up for the FREE Daily Reckoning email edition for your chance to discover a variety of real, actionable profit opportunities.