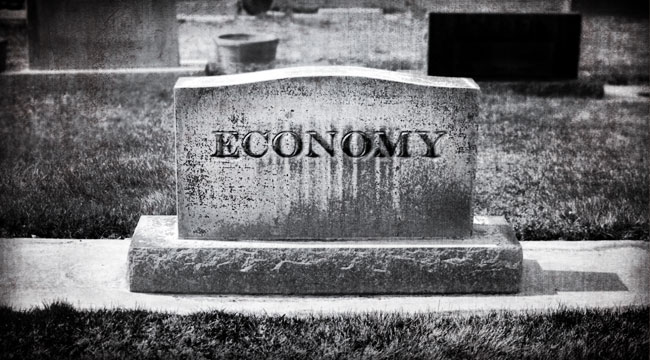 A Fatal Disease: The Inevitable Result of Inflation

“One difficulty about prescribing for inflation is that we don’t entirely know how serious the disease is…..The argument made by those who demand very low rates [of inflation] has simply been inconclusive.” (Paul McCracken, former Chairman of the Council of Economic Advisors.)

Let’s scrutinize the above statement…

The history of civilization is, in reality, the history of a series of societies, or nations, as you might call them. The people in each nation have come under the control of the leaders of a state or government by force or by vote. In either case, the leaders of the country (with the cooperation of the bankers) have always and in every case found it necessary to increase their funds beyond the amount they could collect through taxation. This is almost always done through some form of currency debasement.

Whether the state borrowed from banks and monetized the debt, clipped coins, or simply ran printing presses to print new issues of notes, the results have always been the same: rising prices. As the state monetized debt and consumed the products and services purchased with those I.O.U.’s, the community as a whole was deprived of that production.

The fact that the community felt it was receiving tangible wealth back in the form of “money” only served to confuse it. In the end, the confusion that resulted from this illusory wealth caused a fatal cycle of events that ultimately ended in the collapse of each of those states.

If you, as an individual, borrow money from someone and never repay that person, you have stolen from him. You are a thief. He is worse off; he has lost some of his wealth. When a state monetizes debt either by printing bank notes directly or by borrowing such notes from a bank without intention of repaying, it is just as much a thief of the society. The difference is that the victim becomes twice removed from his enemy. He can’t tell by whom he has been victimized.

The real loss falls on the population as a whole, and in such a camouflaged pattern that the results defy surface analysis. In other words, the theft is translated into rising prices, and the rising prices do the dirty work. When the victim feels the threat and tries to protect himself, he usually flails out at the symptom rather than the cause. The theft occurs when a person borrows money and does not repay it. The symptom is the rising price. As the individuals in society attempt to react to the symptom (rising prices), the trouble begins.

When the Congress votes to increase the national debt, as they have done periodically for years, how do you feel? Do you realize that what they’re doing is borrowing money directly from you with no intention of ever paying it back (Borrowing it from you, if you’re a producer. Of course, if you’re on welfare or unemployed, you have nothing to lend them.)

Would you consider loaning someone money knowing that they had a long history of debt repudiation, and know that you may not agree with what they will do with the money once they’ve borrowed it? Of course, you wouldn’t. But you’re doing it anyway.

The most staggering revelation to come from a study of the economic history of past societies is that the sequence of economic events in the United States during the past fifty years has occurred repeatedly in dozens of other societies stretching as far back as early Macedonia:

The above scenario has been repeated in almost every society where the state has debased the currency. Everyone who is concerned about preserving his wealth should read Fiat Money Inflation In France by Andrew Dickson White. It is a classic chronicle of the effect that fiat money had on the economy of France subsequent to the French Revolution. The parallels between France in 1789 and the U.S. in the 20th century are both obvious and frightening.

One has to wonder if President Roosevelt had ever studied the histories of countries that tried outlawing gold and inflating the money supply to solve their temporary economic problems. When he said, “it’s all right; after all, we’re borrowing from ourselves,” had he heard of Macedonia, or the French economy of 1789? And what of President Nixon? When he instituted price controls, where were the scientists who said, “Let’s observe the past before we act.” If the saying is true that history repeats itself, could it be because no one consults history before they act? For Dr. McCracken to say that we don’t really know of the seriousness of the disease called inflation is totally absurd. The disease is fatal.

John A. Pugsley
for The Daily Reckoning
December, 1974

Ed. Note: No matter how much money the Fed prints or how high the deficit gets, inflationary policy has done absolutely nothing to add any real wealth to the U.S. economy. And this policy doesn’t look like it will end any time soon. That’s why it’s best to stay informed, ahead of the curve and ready for whatever comes next. That’s why we write The Daily Reckoning email edition – to help readers stay one step ahead of the Fed, the politicians and the markets. Every single day, readers are treated to no less than 3 specific chances to discover real, actionable profit opportunities, along with the world’s best financial commentary. And it’s FREE. So don’t wait another minute. Sign up for The Daily Reckoning email edition, for FREE, and start getting the full story.

John Pugsley was the author of numerous books and reports on economics, investment and politics, and former editor of John Pugsley’s Journal. Mr. Pugsley authored Common Sense Economics, and in 1980 The Alpha Strategy correctly warned that the United States would experience “the largest deficits in the history of the nation in the next five years” and showed investors how to protect themselves.