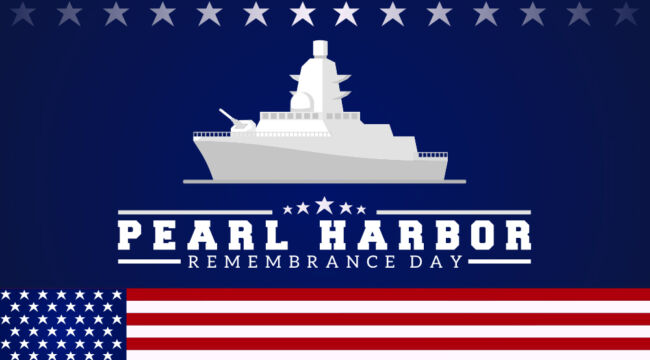 A day that will live in infamy…

Or perhaps even Jan. 20, 2021, the date when the most popular and beloved president in history vacated the White House?

No. We refer of course to Dec. 7, 1941 — 81 years ago today — when naval and air forces of Imperial Japan gave Pearl Harbor a good working over.

In our distant youth we recall the anniversaries drew far greater notice.

Many Pearl Harbor survivors still drew breath. And many Americans not present could still recall their precise location when word reached them.

Yet fewer and fewer of these Americans — Americans of the “greatest generation” — linger on.

Thus the evil day may live in infamy… but not in memory. More memories die with each year that passes.

The United States has since endured another Pearl Harbor of sorts. The events of Sept. 11, 2001, rank alongside it, and struck… literally and figuratively… closer to home.

Yet the Pearl Harbor blow was the first to remind Americans of their vulnerability to the sinister world beyond.

Ask a typical American how the United States got into World War II, and he will almost certainly tell you that the Japanese attacked Pearl Harbor and the Americans fought back. Ask him why the Japanese attacked Pearl Harbor, and he will probably need some time to gather his thoughts. He might say that the Japanese were aggressive militarists who wanted to take over the world, or at least the Asia-Pacific part of it. Ask him what the United States did to provoke the Japanese, and he will probably say that the Americans did nothing: we were just minding our own business when the crazy Japanese, completely without justification, mounted a sneak attack on us, catching us totally by surprise in Hawaii on Dec. 7, 1941.

Roosevelt, the American president, thundered that Japan’s treacheries that day were “dastardly and unprovoked.”

Dastardly: wicked and cruel, by definition.

By the dictionary’s terms we must agree. Japan’s severe trespassings against American life and property that morning were dastardly indeed.

But were they unprovoked? Here we are less convinced.

As we have noted before…

These were done in response to Japanese buccaneering in Indochina.

“On July 2, 1940, Roosevelt signed the Export Control Act, authorizing the president to license or prohibit the export of essential defense materials.” Under this authority, “[o]n July 31, exports of aviation motor fuels and lubricants and No. 1 heavy melting iron and steel scrap were restricted.” Next, in a move aimed at Japan, Roosevelt slapped an embargo, effective Oct. 16, “on all exports of scrap iron and steel to destinations other than Britain and the nations of the Western Hemisphere.” Finally, on July 26, 1941, Roosevelt “froze Japanese assets in the United States, thus bringing commercial relations between the nations to an effective end. One week later Roosevelt embargoed the export of such grades of oil as still were in commercial flow to Japan.” The British and the Dutch followed suit, embargoing exports to Japan from their colonies in southeast Asia.

United States officials understood they were backing Japan into a corner very, very tight. They did this knowing well that Japan might take a desperate armed lunge in response.

If you push a man hard and repeatedly… should you be surprised when he clobbers you in the snout?

Roosevelt and his subordinates knew they were putting Japan in an untenable position and that the Japanese government might well try to escape the stranglehold by going to war. Having broken the Japanese diplomatic code, the Americans knew, among many other things, what Foreign Minister Teijiro Toyoda had communicated to Ambassador Kichisaburo Nomura on July 31: “Commercial and economic relations between Japan and third countries, led by England and the United States, are gradually becoming so horribly strained that we cannot endure it much longer. Consequently, our Empire, to save its very life, must take measures to secure the raw materials of the South Seas.

On the 7th of December, 1941, early Sunday morning, the Japanese Empire took its measures… delivering its hammerblow to the American Pacific fleet, snoozing at anchor in the Hawaiian Islands.

Japan’s war declaration against the United States (and Great Britain) made very specific mention of the oil sanctions:

Our adversaries, showing not the least spirit of conciliation… have intensified the economic and political pressure to compel… our Empire to submission. This trend of affairs would, if left unchecked… endanger the very existence of our nation. The situation being such as it is, our Empire, for its existence and self-defense, has no other recourse but to appeal to arms and to crush every obstacle in its path.

The United States Pacific Fleet was in its path, alas.

Not Just a Crime, But a Blunder

Yet as Talleyrand might have argued: The Pearl Harbor aggression was not merely a crime — it was a blunder.

The Japanese had blundered their way into the American game trap. United States officials were adamant that Japan deliver the initial blow.

That is because they realized it would incense the American public into a very high state of vengeful incandescence. They would fill the recruiting stations with hundreds of thousands of men, each hot to get his hands around Tojo’s neck.

“The question was how we should maneuver them [the Japanese] into firing the first shot without allowing too much danger to ourselves.”

Just weeks later, here is the same Henry Stimson — reflecting on the wrecks of Pearl Harbor:

“My first feeling was of relief … that a crisis had come in a way which would unite all our people.”

And so the Japanese blunder.

Yet here is a question: Would the American people shake their fists so angrily against Japan… had they read the War Secretary’s personal diary?

We are ridden by doubt. They might rather storm his office in demand of answers.

We might add: Prior to Pearl Harbor, the United States Navy had been initiating jousts against German U-boats along the Atlantic convoy routes.

Was the United States a neutral power prior to December 1941? And did razzing German U-boats along the Atlantic convoy routes constitute a breach of the neutrality acts to which it pledged?

The answers are yes.

Many historians will tell you Mr. Roosevelt was attempting to lure the Germans into another Lusitania trap.

But Herr Hitler penetrated the plot. With sharp and shrewd eyes he could see the bait worm wriggling upon Roosevelt’s shiny hook.

He ordered his men to avoid all tangles with vessels flying the neutral flag of the United States.

He issued any U-boat man who had gotten himself so entangled a severe barking — even if his man had shot back only in strictest defense.

Understanding the Devil Doesn’t Mean You Sympathize With Him

Let it go immediately into the record:

We do not bless or condone the Japanese aggressions of December 7, 1941, 81 years ago today — or those of Japan’s Teutonic ally.

In our residence, Victory in Europe Day and Victory Over Japan Day are events of high patriotic revelry. They rank third and fourth, respectively, behind only Independence Day and Flag Day.

We seek merely to understand their aggressions — a man who understands the devil’s grievances can nonetheless condemn his tradecraft.

In light of the severe embargoes arrayed against the Japanese Empire in the summer of 1941… we do understand its aggressions.

We are out simply to illustrate that truth is war’s first battlefield fatality.

Alas… the world we inhabit is often less a world of clarifying black and white… but confounding and vexing gray.