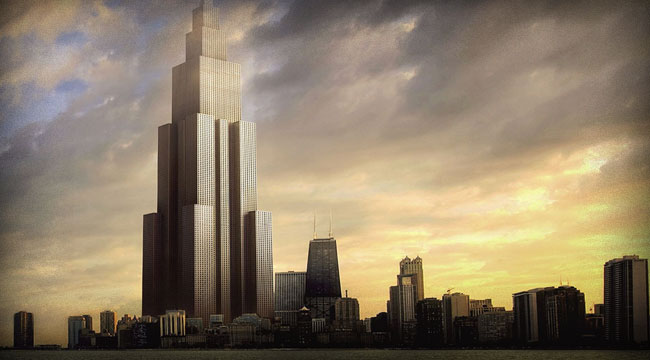 A City in the Sky Clears Your Road to Riches

In the land where emperors did the seemingly impossible by building the Great Wall of China… a new breed of CEO plans a more extraordinary monument. But instead of out, he’s building up.

Zhang Yue — the wiry, 52 year-old, virtual “Steve Jobs” of China — is ready to execute the construction of the tallest building in the world. With local government approval, now only Big Government’s stamp awaits. The tower in question is accurately dubbed “Sky City”.

At 220 stories or 838 meters high, it’s 10 meters taller than the Zurich Khalifa in Dubai… and a fourth the cost. But that’s just the beginning…

Not bad considering it includes 200,000 tons of steel, 104 elevators, 17 helipads, a hospital and a hotel, schools, offices, shops, restaurants, and more… totaling a capacity of some 30,000 people.

They’ve already built a 30-story hotel in Hunan province in just 15 days (a time-lapse video of the build is on YouTube).

Here’s how Zhang is doing it…

After the devastating 2008 earthquake in Sichuan province that left over 87,000 people killed or missing, Zhang set out to design safer, more efficient, and environmentally sounder buildings.

He realized that prefabricating building-floor slabs with pipes and wires built in, ready to be connected once modules are in place, could allow buildings to go up much faster.

This means about 95 percent of the building is made in-factory, and only 1 percent of materials are discarded as waste. Think of it as ultra-sophisticated Lego block-building.

But this isn’t how Zhang first made his money.

He became No. 186 on the Hurun Report of wealthiest Chinese, building an estimated $1.19 billion fortune, in perhaps an even more peculiar way.

He started his company on the back of some patents for non-electrical air conditioning, and later expanded into industrial strength chillers and air purification systems that have been installed in Madrid’s airport, a U.S. military base, and throughout Europe and Asia.

It’s peculiar because the technology is a bit “old school”, but we don’t have time today to get into the mechanics of it. Suffice to say, Zhang believes environmental pollution is where we need to put our resources. In his words:

“Our era’s problem is not productivity and it’s not wealth. It’s not even politics or democracy. In society today — including China and all the countries of the world – we’re facing the increasingly grave problem of environmental pollution.

Believing 68 percent of human illnesses are caused by stale air, the air purification systems in his buildings are his way of contributing to “our era’s problem”.

This may seem a little extreme to those of us in the United States, but from his perspective, how could you blame him?

He wants to set up franchises so that such buildings can go up anywhere — with seven in China so far, and plans for 150 around the world… but that still won’t be enough to solve the crisis.

That brings us to today’s takeaway.

If you look at how the United States and many other countries have cut back on emissions, it was through one simple device invented in 1975, a device China has yet to seriously adopt…

The job of the catalytic converter is to convert harmful pollutants into less harmful emissions before they ever leave a car’s­ exhaust system. The “three way” converter is so named because it converts the three main pollutants in automobile exhaust: carbon monoxide, unburned hydrocarbon and oxides of nitrogen.

But the real money maker is in the catalyst itself. The catalyst is most often one of these precious metals: platinum, palladium and rhodium. In the case of platinum and palladium, there are two sides to this coin: the supply side, and the demand side.

You already know about the demand side: China’s uncontrollable population desperately needs to solve their smog crisis. Their smartest entrepreneurs recognize this, and so should you.

Catalytic converters worked for everyone else, and it could for China.

As for the supply side: scarcity is increasing. We’ll touch on this more in future issues, but evidence suggests that China, Russia, and South Africa could be about to corner the market.

Takeaway: though gold has dropped… platinum and palladium is likely climb high in the future… unless a rich-veined asteroid hits earth.