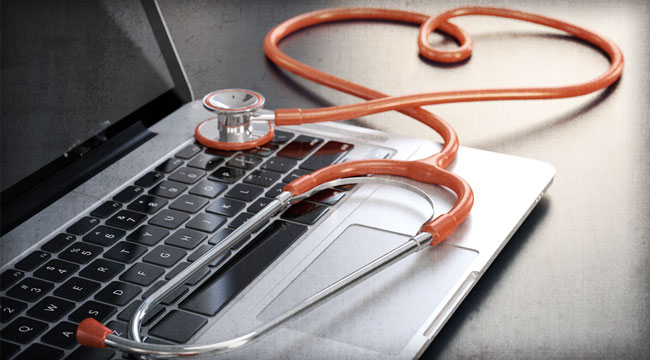 A Cheap, Easy Way to Fix the US Health-Care System

We have seen the future. In Boca Raton. At the mall.

We’re talking about the future of health care. It’s already the nation’s biggest and fastest-growing industry. And it’s ripe for disruption. A big fat plum, waiting for a worm.

In fact, were it not for the poisonous gas laid down by Washington and the health-care oligarchy, the industry probably would have met its Napster already.

For those who are not hip to the online music world, Napster practically destroyed the record industry when it made it possible for people to share their music collections, for free, with other Internet users – without paying the band, the record label, the distributor or the retailer.

The Internet has practically destroyed the print media, too. It has made it so cheap and so easy to distribute text in digital form that no old-style publishing business can resist it. Newspapers sales are sinking. Bookstores are closing. Directories and databases are all abandoning dead trees for the fluid freedom of fast-moving electrons.

Which brings us to the Apple store in the mall in Boca Raton.

…most people do not have rare health problems; they have the kinds of problems most people have.

“What’s the problem,” asked a confident young woman with an iPad in her hand.

Wife Elizabeth explained that one of her email programs wasn’t working properly. The woman took some digital notes… or checked some boxes. After a brief set of interrogatories, she announced:

“A technician will be with you soon. Most likely, he’ll already know what the problem is.”

He would most likely know because he had probably seen it before. And the iPad had set him up for it. The information fed into the iPad helped the machine identify a range of possible problems and solutions. The technician must have had a fair idea – even before he saw the “patient” (the laptop computer) – what was wrong and what to do about it.

These problems can be fingered in just a few questions asked by a competent clerk… tested with a few additional questions… instantly assigned probability scores for the accuracy of the diagnosis… and given additional probabilities for the effect of suggested treatments.

These diagnostic software systems could be open source (meaning there would be universal access by way of a free license to the source code). This means they could be improved by an army of software developers all over the world. And they could be updated and deepened, second by second, by doctors and patients… to record, recall and deliver far more information than a doctor alone ever could.

After pointing to likely problems, such software could produce thousands of pages of documents, histories, studies, science, articles and so forth – including dissenting opinions and alternative recommendations – allowing the patient to become as much of an authority on his illness as he chose to be… and to take as much charge of his treatment as he wished to.

The program could also recite the risks of drug treatment more clearly than the typical medical professional. Patients could then buy medication just as they do today at Apple stores.

Where necessary, questions could be easily enhanced by visual scans and more objective tests. Complications, confusions and uncertainty could also be easily flagged for further study or more traditional medical treatment.

Patients would have no obligation to use this new service. Nor would they be limited to it. It would be a cheap and easy alternative, at a fraction of today’s prices.

But wait, you might say, what about the risks?

We presume such a system would make wrong diagnoses from time to time. We also presume that, occasionally, treatments would be inappropriate. But is there any reason to think there would be more errors in such a digital system than in the more human-based system we have now?

The Internet would also allow patients to report on their progress on a daily… or even hourly… basis. This would allow the software to “learn” – adjusting its models, depending on the reported effects.

But wait. We must be dreaming! The health-care/insurance industry is so rich… so successful… so fat… and so sassy there’s no way the conniving partners — in the industry and Washington — would permit the competition.

What would the quacks and specialists do? Who would buy the worthless drugs and treatments? How would the health insurers make their money?

And what about the tort lawyers? Who would they sue, if the advice came from an open-source computer program… with thousands of contributors… including patients?

Nah… A disruption in the health-care industry? Not going to happen. The future will have to wait.

Ed. Note: If you’re holding out for the next election to bring about political change you’re in for a longer wait than you think. Instead of casting a ballot and encouraging the bastards… sign up for The Daily Reckoning and learn how to take your wealth and freedom into your own hands. Click here to subscribe for FREE, and never miss a future update.