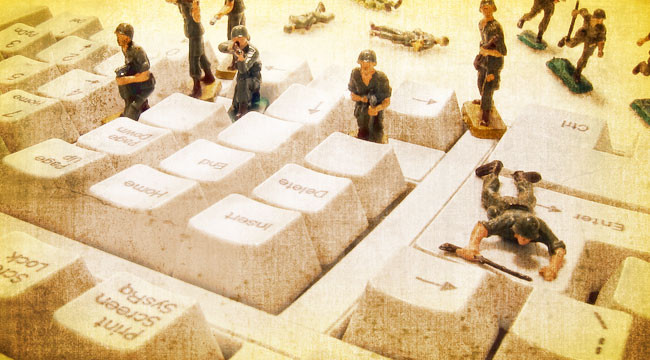 A Better Way to Blow Up Your Enemies

There are undeclared wars going on all over the world today.

No, I’m not talking about simple border disputes in Africa or our ongoing operations in Afghanistan. You won’t hear about these wars on the news, though some of the world’s leading countries are involved. In fact, it’s very likely that the U.S. is involved in at least one of these “wars” right now.

That’s because these conflicts are operating in the fifth domain of war: cyberspace — the latest battlefield after land, sea, air and space. I’ve noted in these pages before — war isn’t strictly kinetic anymore. The limit of an army’s reach is no longer the range of its biggest gun — a navy’s striking range is no longer measured in the miles its missiles can fly.

In the fifth domain of war, invisible signals race back and forth through wires and circuitry in an attempt to gain information or disable key systems. Professionals in the cyberwarfare business often refer to these programs as “computer network operations,” or CNOs, for short. And there are more “cyberwarriors” each year.

Descriptions of cyberwar read more like science fiction than the annals of military history: Offensives jump off at the stroke of a key. The sentries are firewalls, encryptions and passwords. Viruses drop behind enemy lines like guerillas and sow confusion.

It’s a whole new way to wage war, and one that some predict will dominate international relations in coming decades. In fact, the increasing importance of cyberwarfare could well shake up the existing balance of military power around the globe.

How can politicians and generals resist? With plausible deniability, it’s as close to war without risk as the military can get. Need to shut down a rival country’s secret weapons program but can’t penetrate their airspace undetected? Drop a virus instead of a bomb! That’s the kind of option policymakers and warriors have on the table now. It’s a whole new ballgame.

Indeed, some experts say the wars of the future will be fought only with special forces operators and computer programmers. However, until we figure out a way to profit from the Navy SEALs, I’ll stick to talking about the latter — cyberwarfare and the profit opportunities it gives you, the investor.

Cyberwarfare is a $55 billion industry. It’s also America’s fastest-growing industry, set to double in the next 12 months. One recent study characterized cyberwarfare as “the ultimate asymmetric weapon” — I like “the fifth domain of war” better.

One of the biggest challenges that emerges in taking war to the fifth domain is that cyberwarfare capabilities offer a powerful and immediate force multiplier for rogue states. Countries that previously posed little threat when judged by conventional military standards, such as Iran, now pose much larger ones. This is a huge shift: Remember, Iran doesn’t possess adequate conventional military force to directly challenge its regional enemies Iraq and Israel, let alone global enemies like the United States.

Iran’s conventional military doesn’t rank in the world’s top 10. Despite having more than a million men under arms and several thousand armored fighting vehicles and combat aircraft, it’s doubtful that it could survive a conventional war. In fact, it barely did against Saddam Hussein’s forces in the 1980s, which were in turn smashed by NATO forces in one of the shortest wars in modern history.

Yet a recent cyberwarfare study by the Atlantic Council, a beltway think tank, classified Iran as a tier-three cybermilitary. That means it’s capable of causing significant harm to civilian networks within the U.S., if not in the government. What a jump in capabilities for this fourth-rate military power halfway across the world! On its best day, Iran could hardly hope to sink a single U.S. Navy warship, but with its growing cyberwarfare capability, suddenly, it’s a real threat.

But the practical anonymity that makes cyberwarfare the perfect way for rogue states to attack the U.S. and its allies also makes it the perfect weapon for democratic countries too. Now, without a mandate for “boots on the ground” warfare or U.N. approval, they can launch pre-emptive or retaliatory strikes against these threats. They go from being front-page news to wink, wink, nod, nod.

Most recently, it’s become known that the destruction of Iran’s latest nuclear testing facility was carried out in the fifth domain by a virus call “Stuxnet,” reputed to be a joint operation between the United States’ NSA and CIA and Israel’s military. This was the first time a virus did significant physical damage to a military facility.

We should expect to see more of this type of attack in the event that a “cold” cyberwar heats up. In fact, recent developments have increased the likelihood we will. I’m talking about the Pentagon’s black budget. If you haven’t heard about the black budget, that’s because it’s normally been talked about behind closed doors… until now.

Just this month, The Washington Post released information it received from the renegade whistle-blower Edward Snowden about the U.S. intelligence community’s funding for secret projects. It’s been dubbed the “black budget.” What they found was startling.

The 178-page report they received details exactly how the intel budget will be portioned out — I’m talking the who, what, when, where, etc. In case this isn’t clear: This information has never — I repeat, never — been made public before! At least it’s never been intentionally made public before.

The last glimpse the public got into this shadow world was in 1994 when a congressional committee accidentally released a detailed budget to the press. Using that as the last known benchmark, the changes made over the last two decades reveal a seismic shift in the 16 U.S. intelligence agencies’ priorities, their pecking order and a lot about the U.S. military-political strategy as a whole. Let’s focus on two points.

The CIA — the spearhead of intel “offensives” overseas — which received just 11% of intel money in 1994, will receive a whopping 28% of the “black budget” in the next fiscal year! That’s even more than what the NSA will get.

Looked at this way, it’s a shift from defense to offense. With terrorists harder to find than ever and rogue states to worry about, we’re in cyber “seek and destroy” mode now. That’s my second point: Cyberwar is where funding is shifting to.

In fact, cyberwarfare-related activities will receive more than $4.2 billion, according to the Post’s breakdown. That’s nearly 10% of the whole intelligence community’s budget! My, how times have changed from the early days of the Internet.

The bottom line is that our military planners see the next big threat coming in the form of an attack on the computers that run our country, and they’re preparing. These revelations can and should move markets… At least if you’re paying attention.

That’s because when the government wants to expand its cybersecurity programs, develop new capabilities or shore up its networks’ defenses, it relies on private cybersecurity companies to do most of the heavy lifting. They’ve got “the right stuff,” to borrow a phrase, and they’re for hire.

P.S. Eight days before the greatest leak in U.S defense security history, I predicted that we were going full steam ahead into this “fifth domain of war.” Now, I’m revealing exactly who stands to benefit from it. Earlier today, I gave readers of The Daily Reckoning email the opportunity to discover exactly who I’m talking about. If you didn’t get that email, not to worry… The report I shared with them is still available and will likely make another appearance tomorrow. Simply sign up for The Daily Reckoning, for free, right here and watch your inbox around 4 p.m. tomorrow for all the details.