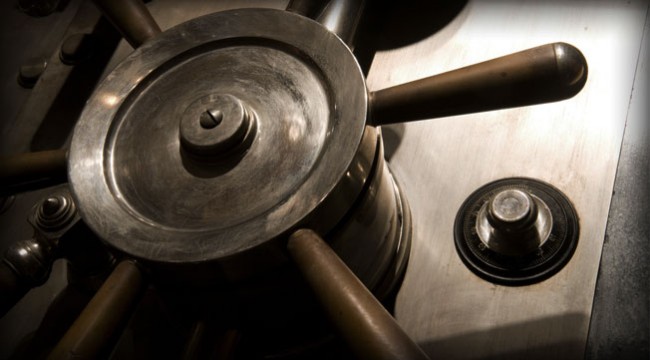 A Better Kind of Bank

But then came the crises, the scandals, the closures, not to mention the government bailouts.

Even now, with the economy seemingly on the mend, it still seems too early to trust your investment dollars in such a perilous industry.

However, there is another side to the banking world you probably don’t know about. It doesn’t operate by the traditional banking rules — so it avoids many traditional banks’ problems.

By law, they pay out huge sums to their investors… And these dividends are partially to fully shielded from current income tax liabilities.

My Lifetime Income Report portfolio already contains two of these specialized banks. But this idea is so powerful, I think it’s a worth a second look…

On the surface, the banking industry seems pretty simple. You get some cash and loan it out, earning a stream of cash flow as borrowers pay off their principal and make interest payments.

The trick, of course, is that you need the borrowers to keep making those principal and interest payments.

A good banker focuses on how the bank will get its money back… that is, does the borrower have the means to pay it back?

And many bankers did, at least until just a few years ago. Suddenly, bankers stopped being bankers and became traders.

Instead of focusing on how much money they would make on their loans, they started imagining how much they could make. Hoping to goose earnings, they stopped getting to know individuals and businesses before making loans, choosing instead to buy bundled packages of securitized loans — without ever getting a firm grasp on what was in those packages.

You know how it ended — the credit fiasco that unraveled in summer 2007, crushing banks across the globe.

Even today, some of the biggest banks have yet to fully resolve many of these sorts of packaged assets. That’s reflected in their stock prices, with many shareholders still underwater.

But as I said, there is a major exception to this story… a class of banks that avoided the problems plaguing the rest of the industry.

In fact, while the leading traditional U.S. banks lag, this better breed of banks is making a killing. Just take a look at the chart below, which shows traditional banks — as represented by the KBW Bank Index — against the other type of bank — represented by the Wells Fargo Business Development Company Index. 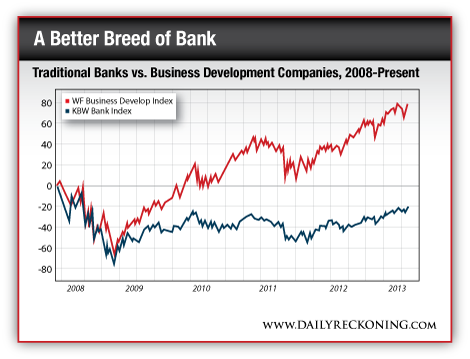 These banks are called business development companies (BDCs), and they’ve taken over much of the lending and investing from traditional commercial banks.

BDCs aren’t new — they were set up with the U.S. Investment Company Act of 1940 and expanded by the Small Business Investment Incentive Act of 1980.

In 1980, the nation faced ultra-high inflation. And traditional banks were skittish at lending to small and medium-sized businesses. When they did, the interest rates were sky-high to cover the risks.

So Congress set up a tax-advantaged investment company structure to help drive more credit to stimulate the economy — BDCs.

BDCs are not set up as common stock companies — but, rather, like funds. Management sells shares on an exchange and uses the capital much like a commercial and/or an investment and merchant bank.

The key advantages are no banking regulators, no forced reserves needed to fund the Federal Reserve System, no fees for the FDIC and — the best part — no corporate income taxes owed to Uncle Sam.

That’s right — thanks to Congress, BDCs are pass-through securities, much like our successful real estate investment trusts and energy partnerships in the portfolio. So the profits are passed through in dividends without double taxation.

This means more cash flows to you as a shareholder. (And like other pass-throughs I’ve talked about, those dividends are partially or fully shielded from current income tax liabilities.)

BDCs are soaring while banks are suffering. Banks are still working through their nonperforming portfolios while regulators continue to restrict their ability to increase fee and trading revenues. And they remain under the cloud of pending regulations and lawsuits over their past mortgage lending actions.

BDCs also feed the market’s appetite for income-generating assets, which has allowed them to raise capital cheaply. And since banks aren’t lending, the market is wide open for BDCs to cherry-pick their deals and investments, getting the best for themselves and their investors.

Their size lets them specialize in markets, regions and industries in which they have specific competitive advantages.

P.S. As I said, we’re already holding two of these BDCs in the current Lifetime Income Report portfolio. But I’m increasing my recommended buy-under price, meaning you should pick up some more shares — especially if you just recently joined us or missed out the first time around. Subscribers to the Daily Reckoning email have a unique opportunity to discover just which of these BDCs I’m talking about. If you’re not yet a subscriber, take a moment to sign up for free, right here.