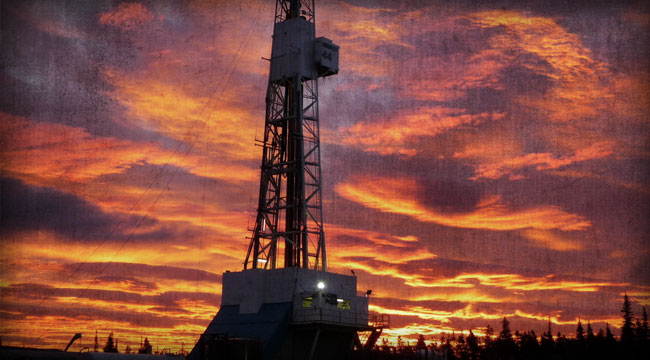 A 4-Letter Word That Could Make You Filthy Rich

I believe you and I are staring down an unprecedented age of wealth.

In the past 10 years, the U.S. has turned the ship around, quite literally.

Today, I want to share what looks to be the next hot spot in this evolving story — and potentially our chance to profit!

But first, let’s get one thing right out in the open…

Some folks are hesitant to believe America’s energy comeback. They think America’s oil boom is a flash in the pan. But these naysayers are going to miss an enormous opportunity right here in our own backyard.

In fact, here are two stats that you should consider…

Longtime readers know that I could not be more excited about this.

Indeed, next time you fill up your gas tank at the local station, don’t think about Saudi Arabia, Nigeria or Russia. Instead, think about Texas, North Dakota, Oklahoma, Louisiana and even Colorado!

These are the oil plays that are making a difference today… and will continue to do so for decades. It’s an amazing turnaround story here in the U.S.

America is set to be the world’s leading crude producer.

I’ve talked to big drillers, little drillers, service companies, rig owners… The consensus is the same…. This isn’t a flash in the pan. It’s a decades-long opportunity for America… and investors!

And as America’s “second oil boom” gains even more steam, there’s a four-letter word you’ll want to follow to profit from it.

That four-letter word is “rigs.”

Longtime readers know that we’ve recommended profiting from the oil rig biz, with Nabors Industries (NBR: NYSE). And by the look of things, there may be a lot more movement to the upside in those shares.

To give this moneymaking theme a kick-start, take a look at the chart below: 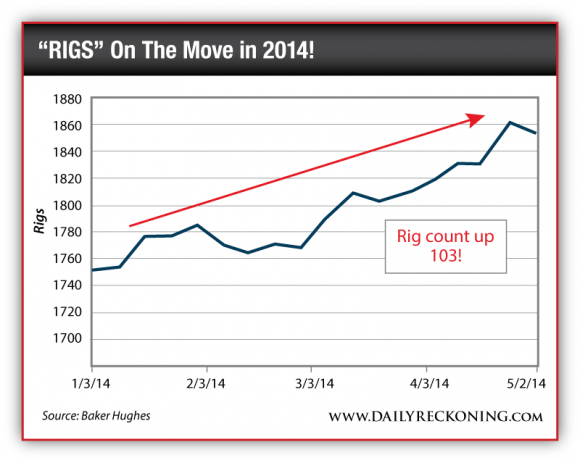 Above, you’ll see a chart of the U.S. drill rig count. The “rig count” is compiled by Baker Hughes and includes working onshore drill rigs for oil and gas.

During 2012 and 2013, the U.S. rig count was relatively beaten-down/stagnant, but as you can see in the chart above, there’s been a substantial uptick in drilling rigs in 2014.

America’s second oil boom rages on! And we’ve got the rig boom to prove it.

Of note, approximately 67% of the drill rigs shown above are drilling horizontal wells. Horizontal wells, as you likely know, are primarily used for drilling shale formations.

There’s plenty more to this story, so let’s pull back a few more layers of the onion…

So during 2012 and 2013, the rig count bottomed out around 1,750 rigs. From the outside looking in, you’d think that a drop in 250 rigs or so (since a 2011 high) would mean that the oil boom had lost its luster. But a closer look reveals the opposite trend.

That is, with the onset of more efficient drilling techniques, including multipad drilling, a single specialized rig could produce WAY more oil than once thought. These specialized rigs were getting much more efficient. So even in the face of a rig count drop, oil production continued to ramp up.

Add up those two factors and it’s no wonder our favorite name in the rig business, Nabors, is up 51% on the year. Take a look: 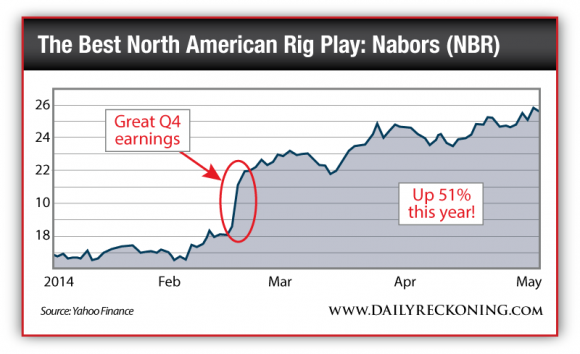 Nabors is a purveyor of the specialized rigs, coveted by well-run shale producers.

The rigs are capable of drilling a shale well and then “walking” a few feet to drill another well on the same drill pad. It’s an incredible sight if you’ve ever seen it… 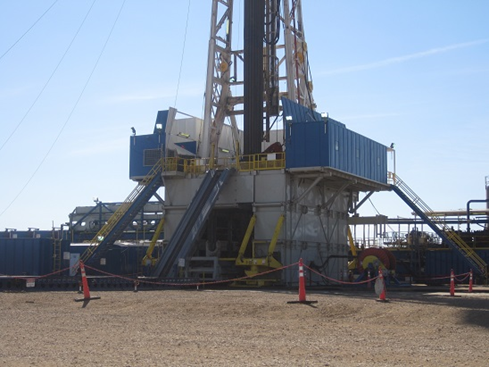 The drill rig shown above is spinning pipe into the North Dakota Bakken formation. The rig operator (a Nabors employee) operates the drilling from the little blue box (with a window) located about 30 feet off the ground on the left-hand side of the rig. Meanwhile, the drill pipe (the big black vertical mass in the middle of the platform) is stacked and ready to spin thousands of feet below.

Here’s a different angle, from the stairs heading up to the drill rig wheelhouse: 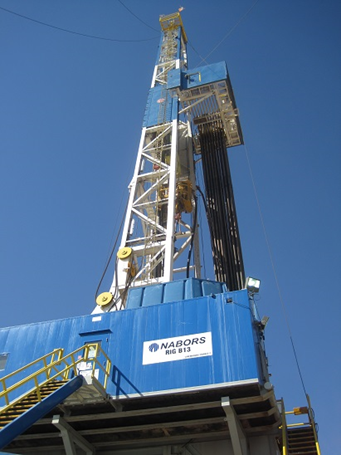 OK, so thus far, there’s not much “special” about this drill rig other than a lot of high-tech drilling functionality and a crew that knows how to use it.

The “specialized” part is shown here: 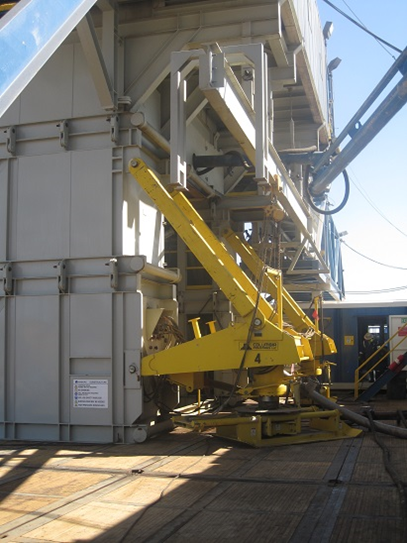 The giant yellow “foot” pictured above, of which there are four surrounding the rig, is capable of picking up the entire rig and “walking” it a few feet over to drill an entirely new well.

If your eyes aren’t bugging out of your head, you must not love this stuff like I do!

You see, instead of having to wait 10, 15 or 30 days to disassemble a drill rig and set it back up in a new location, drillers with “walking” rigs can drill multiple wells from the same pad at alarming speed. (Yeah, yeah, the “walking” rig moves only inches per hour, but you get the point.)

This is a huge, little-reported story in America’s shale boom. The rig pictured above is a true game changer. And the technology used to make it happen is single-handedly responsible for the windfall of American oil production we’re seeing today.

Instead of drill times being 40 days per well, we’re looking at 10 days (or less!). That kind of technological breakthrough is providing shale producers with radical cost savings. Indeed, this story isn’t “new,” but it’s certainly unfolding right in front of our eyes.

P.S. America’s Second Oil Boom is staring you in the face. Don’t miss out on all our future plays – sign up for a free subscription to Daily Resource Hunter by clicking here.