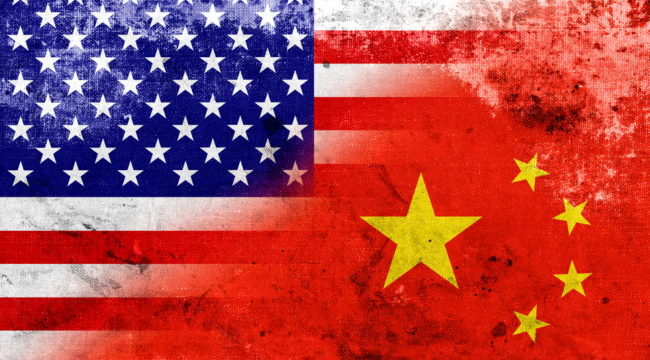 [Ed. Note: Jim Rickards’ latest New York Times best seller, The Road to Ruin: The Global Elites’ Secret Plan for the Next Financial Crisis, claim your free copy here – transcends politics and media to prepare you for the next crisis in the ice-nine lockdown.]

Based upon my reading of recent developments, U.S.- China relations could soon be heading for crisis.

The process of connecting the dots between the political, economic, and social forces buffeting China is complicated. By using technical analysis and information I’ve gathered on the ground in a recent visit to China, I’m able to cut through the haze of political rhetoric and propaganda coming from Washington and Beijing.

That way I can bring you a reasoned estimate of what the near future holds in store for markets as the world’s two largest economies — China and the U.S. — work out their differences for better or worse.

In 2016, we know that China, the world’s second largest economy, defied predictions of a slowdown by unleashing massive amounts of government spending and adding mountains of debt to stimulate its economy.

But I expect 2017 may turn out very differently. China is encountering hurricane force headwinds that will cause its nonsustainable debt-driven policies to reach a critical state.

These headwinds include: confrontations with President Trump on issues of trade, tariffs and currency manipulation; internal political instability from Chinese President Xi’s efforts to expand and centralize his political power; possible geopolitical crises connected to North Korea, Taiwan or the South China Sea; Trump’s pivot toward Russia and away from China; the Chinese credit bubble; capital flight; and China’s delicate relations with the IMF.

Any one of these headwinds in isolation is serious enough. In combination, they could have far-reaching consequences. The election of Donald Trump has certainly complicated issues for China.

The first challenge is that Trump is plainspoken and does not hide behind the usual diplomatic babble. That can be difficult for the Chinese to tolerate because their culture is dominated by the concept of “face” or the need to avoid direct conflict or embarrassment.

When Chinese lose face as the result an adversarial thrust, they try to regain face by being adversarial in return. The result can be an escalation of tensions independent of the policy substance involved. That can make agreements more difficult to achieve.

President Trump and President Xi are on a collision course involving issues of trade, tariffs, and currency manipulation. Geopolitical issues will make the economic issues even harder to resolve.

China’s response to the conflicts mentioned above might take the form of a maxi-devaluation of the yuan, much tighter capital controls, a severe downturn in its economy or all three.

But none of the extreme outcomes will be contained to China. Any significant departure from China’s current growth trajectory has serious negative implications for investors around the world.

In short, we may be witnessing a break-up in the China-U.S. global condominium that has dominated world growth and world politics since 2001.

U.S. policy for the past sixteen years through the Bush and Obama administrations had been soft-pedaling all of these issues in return for cheap manufactured goods and China’s willingness to finance trillions of dollars of U.S. government debt.

Now Trump is changing the rules of the game. He’s saying lost jobs in the U.S. are not worth the cheap goods and cheap financing. He’s betting that China has no alternative but to keep producing those goods and keep buying our debt, even if the U.S. imposes tariffs to help create manufacturing jobs here.

Trump is willing to use leverage from the geopolitical sphere on issues like Taiwan, North Korea, and the South China Sea in order to get concessions from China on the currency issue and China’s trade subsidies such as state support for money losing export sectors (like steel).

As Trump settles into office, he’s backing up his words with actions. His team is now packed with seasoned officials and advisors who have been vocal critics of China’s trade policies for decades.

The new U.S. Trade Representative, Robert Lighthizer, has a record of imposing tariffs on unfair trading partners going back to the Reagan administration in the 1980s. Trump’s transition advisor on trade, Dan DiMicco, is the former CEO of Nucor steel and has been on the receiving end of China’s steel dumping.

Another senior Trump advisor, Peter Navarro, is an academic and outspoken critic of China. Navarro wrote the book “Death by China,” and his work is a roadmap for the kinds of policies Trump will pursue. While Obama advisors such as John Kerry and Jack Lew were mostly talk and no action, the Trump team is ready to rumble.

Admittedly, this forecast was made before Trump’s election and was a long-term forecast, not an immediate warning.

Still, such comments do not go unnoticed in Beijing. A conflict between the U.S. and China would be the most momentous confrontation since the end of the Cold War, in 1991, with enormous consequences for investor portfolios.

The problem is that China may not have much to offer, despite the pressure. Trump may not realize that China’s currency is going down not because of government manipulation, but because of market forces in the form of capital flight.

In fact, China’s main currency manipulation today is an effort to strengthen, not weaken, the yuan to keep the U.S. appeased — although those efforts appear to be failing.

China may not be in a position to keep buying Treasury debt either. China’s reserves are dropping and it has become a net seller of Treasuries. It looks like the days of cheap foreign finance are over for the U.S. regardless of Trump’s policies.

This does not mean U.S. interest rates will spike, despite recent increases. The U.S. will simply force U.S. banks to buy the Treasury debt that China cannot. To the extent that China still runs trade surpluses, it is allocating its reserves into gold, euros, and special drawing rights (SDR or world money) and away from dollars.

The bottom line is that China cannot end its subsidies to exports because it needs the jobs that its export industries create. The Chinese Communist Party is an illegitimate regime that will remain in power only so long as it provides jobs and a rising living standard for the Chinese people.

Once the Chinese job machine stalls out, popular unrest could emerge on a scale much greater than the 1989 Tiananmen Square protests. This is an existential threat to Communist power and will not be allowed to happen for that reason. Therefore, the subsidies will continue.

China cannot prop up the yuan indefinitely because it will run out of reserves and go broke in the process. In effect, Trump is trying to force China to adopt policies on trade and currency that it cannot pursue for political and financial reasons.

The result is likely to be confrontation rather than cooperation. This outcome involves costs for both sides. U.S. consumers may pay more for Chinese goods. China’s factories may slow down as a result of higher costs. Some U.S. manufacturing jobs may be gained, but job losses in other sectors (entertainment, technology, pharmaceuticals, aircraft) may offset those gains.

The greatest danger may be a maxi-devaluation of the Chinese yuan. Once the Chinese realize that they will not be rewarded by the U.S. for trying to prop up their currency, they may just let it crash to reap the benefits of even cheaper export prices to offset the U.S. tariffs.

We’ve seen this movie before. It happened in the 1930s. It was called The Great Depression.

While the exact path and timing of such a conflict may be unclear, it’s not too soon to start building a defensive allocation in your portfolio just in case. The single best asset class for the coming conflict is gold.

When trade and monetary cooperation between the U.S. and China break down, gold will re-emerge as genuine world money, as it has many times before.