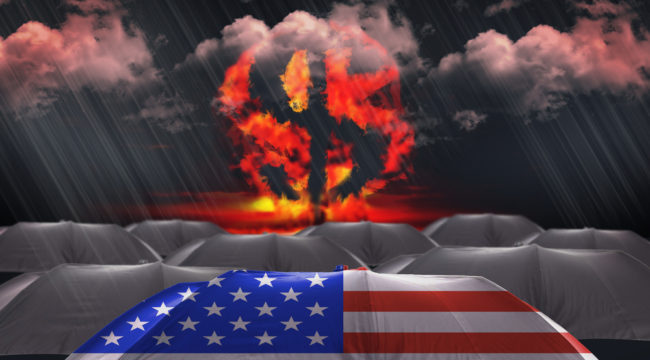 Trump Declares War Against Himself

President Trump has trade in the dock, giving it a good hard grilling.

China and Japan are allegedly “playing the devaluation market.” Germany is using a “grossly undervalued” euro to “exploit” the United States.

The accused plead innocent on all counts. The prosecution presses on.

Yet the prosecution finds itself in a bit of a thicket. Trump’s pledges of deregulation, tax reduction and infrastructure spending all spell a stronger dollar. And the dollar rallied post-election on visions of renewed American growth.

But Trump wails the dollar’s grown too bulky for its own good. It’s “killing us,” he moans. He wants to let out some of the air. A softer dollar gives American products a fighting chance in global markets, goes the reasoning. Brings jobs home. And helps U.S. corporations.

So we’ve come to a strange realization: The new president is at war with himself.

Strengthen the dollar… and weaken the dollar. He can’t have it both ways. It’s trying to take both sides of the seesaw.

That “bit of a mess” could be the next major battle of the currency wars (see Jim Rickards below for more). Trump may have fired the opening shots at China, Japan and Germany.

Ulrich Leuchtmann, analyst with Germany’s Commerzbank, thinks Team Trump has “fired the next salvo in the currency war.” He’s warned his clients to “buckle up for a currency war that might become nasty.”

Is another currency war what the world needs right now? It goes on eggshells as it is. Jim, raising the hair a bit:

The real lesson of currency wars is that they don’t produce the results you expect, which are increased exports and jobs and some growth. What they generally produce is extreme deflation, extreme inflation, recession, depression or economic catastrophe.

No thanks. But maybe a weaker dollar isn’t such a bugaboo after all?

The strong dollar has sucked vast sums of capital out of China and the emerging markets. That’s resulted in a potentially destabilizing debt crisis around the world. A strong dollar makes it harder for countries holding large amounts of dollars to service their debt.

Maybe a softer dollar lightens the burden. And maybe all that capital stays put if the dollar’s not such a gaudy alternative.

But foreign investment in the American economy drops with a weaker dollar. Investment creates jobs. And do you really want to pay more for gas? Bread? And everything else?

Maybe it’s a Goldilocks dollar the world needs. Not too strong… not too weak.

We don’t pretend to know the proper value of the dollar. But our slender understanding tells us it’s an achievement to have a strong currency, not a weak one.

We’re proud to count ourself citizen of a republic whose currency is wanted around the world. It’s a beacon offering promise… solid prospects… and a square deal within a framework of law. A strong dollar therefore seems a national point of honor.

So you can go ahead and put us down for a strong dollar. It has nothing whatsoever to do with the fact that a stronger dollar means cheaper gas for us. And bread. And booze. And anything else our heart fancies.

No, nothing at all to do with that. Our only concern is the national honor. We swear…