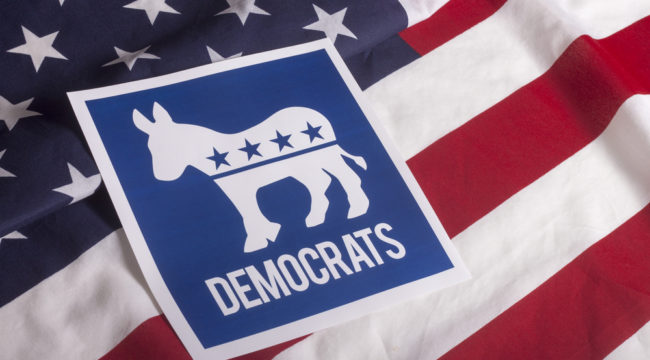 The Market Is a Democrat

“Stockman needs to come out of his ivory tower and feel the emotion of most all working Americans,” bristles one reader.

Another reader blasts David for either “exclusively watching mainstream media for his news updates (and believes them) or supporting the elites, the establishment, staying in control and continuing their agenda to ruin America and usher in their New World Order.”

We’re even losing a good reader over the row: “There is no way that Mr. Trump is finished in this presidential race! I am so disgusted with Mr. Stockman’s pessimistic anti-Trump articles that I am unsubscribing from The Daily Reckoning! How dare he attempt to discourage voters from the one candidate who can strengthen America!”

We’re sorry to lose you. But let the record show David isn’t tickled by a Trump loss and isn’t out to discourage anyone. Nor is he on all fours with the elites or the establishment:

Hillary Clinton will be a nightmare. But what the aborted Trump candidacy has finally proved is this: The current Wall Street/Washington ruling elites will never be defeated without a thundering collapse of the financial system and without the complete discrediting of the Fed, Wall Street, the Warfare State and the Beltway racketeers who prosper from the Imperial City. So bring it on — including the demise of the GOP establishment, which Trump has thankfully already mortally wounded.

Establishment shill? Not quite. David just calls ’em as he sees ’em. And what’s the market reaction to the post-debate hullaballoo?

“Muted” seems to be the watchword. “The markets’ reaction to the debate was fairly muted,” says research director Kathleen Brooks of City Index.

“The general market view that Clinton is going to win could be seen in muted reaction to Wednesday night’s debate, which scientific polls showed the Democratic nominee won easily,” adds Politico.

We see the Mexican peso — perhaps taking Trump’s temperature — spiked after Wednesday night’s debate. It fell yesterday… for what it’s worth.

And today? Stocks overall are taking a breather. The Dow’s down 43, the S&P’s down two. The Nasdaq’s actually flashing green today. Up a baker’s dozen.

Markets say Hillary right now. That means a Hillary win’s already cooked into the dish. But if Trump pulls it out, markets could be in for a Brexit-like shock. Politico:

The general consensus is that stocks might stage a bit of a relief rally once the voting is done but that movement should be limited given a Clinton victory is already largely priced into markets. A shock Trump win, however, could spark the kind of panic selling seen after the Brexit vote over the summer.

Something else the markets are just beginning to consider: a Democratic sweep through the White House and Congress. Credit Suisse’s Lori Calvasina:

In many investors’ minds, the perceived risks associated with a Trump victory in the presidential race have been replaced with concerns about the implications of a Democratic sweep of leadership in Congress (for both the Senate and House to flip).

So… Trump wins and it’s chaos and old night. Hillary wins and it’s steady as she goes. But if she wins too big — taking both houses of Congress with her — and markets face more uncertainty.

Let’s add another character to the drama. The Fed meets in December. If the economy stays on track, does a Hillary win mean a rate hike?

Add those hawkish chirps to a Hillary win and it could well mean a rate hike:

“There have been some Fed comments where they sound like they are ready to move in December. But also partly related is the market view that a hike in December is much more likely if Clinton wins than if Trump wins,” said Steven Englander, Citigroup honcho of foreign exchange strategy.

Traders are now pricing in a 74% chance of a rate hike this December, up from 64% two weeks ago.

The last time the Fed raised — a year ago December — the market went on to plunge 11% over the next two months.

Jim Rickards was at a private dinner with New York Fed head Dudley the other night. Jim asked him if it’s the Fed’s job to put a floor under the stock market. “That’s not our job,” said Dudley.

Thing is, most investors think it is. And they could soon be in for quite a shock if Dudley’s right…