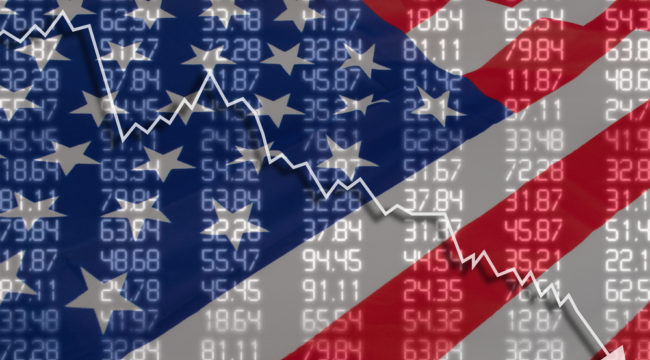 A “Black” Anniversary for a “Black Swan”

Happy anniversary to what? “Black Monday.”

Citibank’s tea leaf and bird entrails readers recently cooked up a chart. It compared this month’s S&P with October 1987’s. Not the Dow, mind you. And it’s only through the 7th. But still. Here it is: 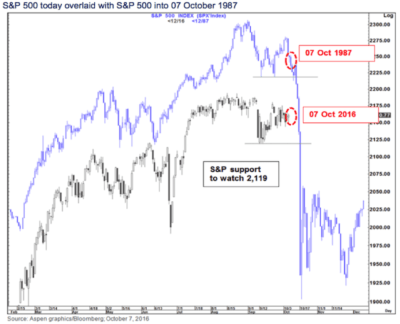 A perfect match? No. But close enough to arch an eyebrow or three on Wall Street.

Some argue the chart’s phantom. Stocks blasted higher in almost vertical fashion to start 1987. The S&P was up about 40% by the end of September, leaving stocks “extremely stretched.” Too much. Too fast. Due for a wallop.

This year, in contrast, stocks tripped out of the gate for their worst start in history. The S&P is only up about 6% for the year in light of January’s swoon. Stocks have a firmer toehold on the ladder this time.

So… Is another Black Monday lurking?

We don’t know. And analysts see a face in every cloud if they look hard enough. But there’s something odd about Black Monday we just can’t shake out of our hair…

Charlie Bilello is director of research at Pension Partners LLC. He studied Black Monday. And his research shows Black Monday was such a freak of nature, such a purple unicorn, it was “simply not ever supposed to happen, in the history of the universe.”

Take your typical bell curve. As Scientific American puts it, “In a perfect bell curve, 68% of the data is within one standard deviation of the mean, 95% is within two, and so on.”

Three sigmas would include 99.7% of the data. And Bilello says the likelihood of a five standard deviation event is “essentially zero” on any given day.

That was Black Monday. A 17 standard deviation event.

Seventeen standard deviations means it never should have happened. Not in the history of the universe. But it did… 29 years ago… today.

Did God pull a joke on the market that day? Was it just some bizarre midnight collaboration of chance? Or are markets somehow more prone to “black swans” than the laws of chance suggest? Maybe the latter. Bilello:

“[Markets] operate in the world of fat tails, exhibiting large skewness… This is a fancy way of saying extreme events (high standard or ‘sigma’ moves) are much more likely to occur than a normal distribution would predict.”

The market is a whirling delirium of complexity. Even more so now than 1987. And that’s the thing…

Jim Rickards pioneered the study of complexity theory and its applications to markets. His conclusion? Markets are increasingly susceptible to “black swan” events as their complexity grows:

One formal property of complex systems is that the size of the worst event that can happen is an exponential function of the system scale. This means that when a complex system’s scale is doubled, the systemic risk does not double; it may increase by a factor of 10 or more… This kind of sudden, unexpected crash that seems to emerge from nowhere is entirely consistent with the predictions of complexity theory. Increasing market scale correlates with exponentially larger market collapses.”

In case you glided past it: “When a complex system’s scale is doubled, the systemic risk does not double; it may increase by a factor of 10 or more.”

Then Jim brings the ax down on the root: “As systemic scale is increased by derivatives, systemic risk grows exponentially.”

The derivatives market in 1987 was a pimple compared with today’s. And today’s derivatives market dwarfs that of 2008. With Jim’s “complexity multiplier,” could it be that today’s market risk is not just higher… but exponentially higher than 1987?

Something to ponder of a fair October evening…

“Globalization… creates interlocking fragility,” says author and statistician Nassim Nicholas Taleb, “while reducing volatility and giving the appearance of stability. In other words, it creates devastating Black Swans. We have never lived before under the threat of a global collapse.”