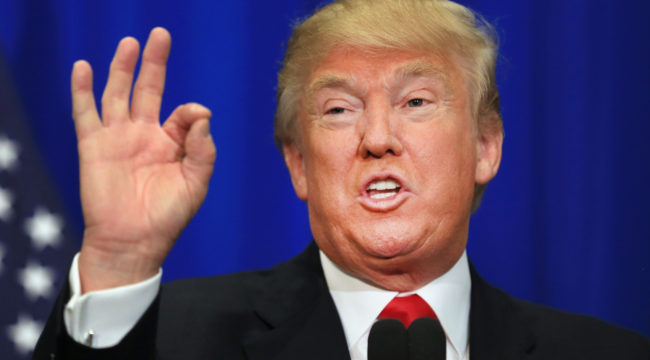 What if He Loses Big?

“We don’t pay much attention to politics… or presidents,” our fearless leader Addison Wiggin wrote recently.

“In fact,” Addison continued, “this is the time of year we urge readers not to vote at all. ‘Why encourage the bastards?’ the saying goes.”

But this election is such a fizzing razzle-dazzle, a Ringling Bros. act of such soaring magnificence, a thing of such grandeur, we can’t avert our baby blues.

Now that Trump’s been waylaid by the (in)famous tape, Hillary’s opened a gaping 45%-37% lead among likely voters. And 20% of Republican voters say Trump’s comments about the distaff side of the species rule him out. All this, according to a national tracking poll released today.

It’s worth noting that Obama was able to parlay a seven-point win into full Democratic control of Congress in 2008. And he used a temporary window it created to jam Obamacare down the national gullet.

Which leads to some interesting questions: If Trump loses big this fall, might the Republicans also lose their majorities in Congress? And might Hillary use her own Democratic majorities to shoulder her agenda through Congress?

The possibility’s got The American Spectator’s Scott McKay rattled like a cat in a room full of rockers:

The Senate, which two weeks ago looked like it would stay in Republican hands, is now very much in doubt. And the House, which has long been a bridge too far for Democrat ambitions, is coming under question.

National Review’s Ian Tuttle is in such a state, the poor fellow can’t sleep:

Could Hillary use Democratic control to, say, enact single-payer health care — that is, socialized medicine? (Obamacare really isn’t.) She wouldn’t have the majority Obama did to sneak Obamacare through, but who knows?

And what about the Supreme Court? Democratic control of the Senate would likely allow her to appoint whatever loony-tunes judges she wants. Four rusting battleships on the Court might resign their commissions during the next four years. Hillary could remake the Court for a generation.

That’s one of the bogeymen Trump’s shepherd dogs have used to herd the Republican unwilling onto the reservation. But now with that October Surprise of a tape, the herd’s stampeding out the gate.

Over 50 GOP officials have called on Trump to drop out of the race. And House Speaker Paul Ryan said he wouldn’t defend Trump or campaign with him anymore. His only mission now, says he, is to stop a Democratic takeover of the House and Senate.

But Ryan’s in quite the spot. Alienate the base too much and it might visit a pox upon his House. Disgruntled voters might punt on the other Republicans on the ticket and hand every election to the Dems. The Guardian’s Richard Wolffe explains it:

Ryan and his crew cannot run away from their own Trump-loving base. If they do, they run the very real risk that Trump voters will mark their ballots for the presidential candidate and simply skip their down-ballot votes. Even a small protest vote would hand every battleground district to the Democrats.

Those are the stakes. And the GOP’s in a corner too tight to breathe. The Spectator’s McKay again: “It’s a potential electoral rout, and Republicans are at each other’s throats.”

Unfortunately for the GOP, so is Hillary.