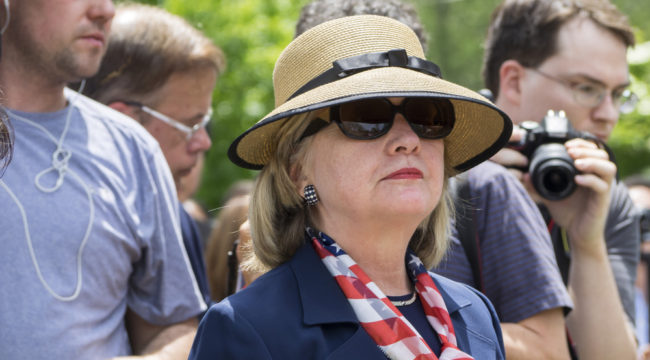 But government doesn’t make anything great, not even itself. It is a necessary evil that always and everywhere is driven toward self-aggrandizement and mission creep by the politicians and special-interest lobbies that control its operations.

What government actually does is thwart the capacity of the people to pursue their own vision of greatness by encumbering their economic lives with burdensome taxation, regulation, roadblocks to opportunity and monetary fraud. It saddles their public lives with endless nanny state impositions and encroachments upon their personal liberty.

Hillary thinks deficits don’t matter and that baby boomers are entitled to the social insurance they didn’t earn.

Indeed, her victory speech at the Democratic convention in Philadelphia was more or less a promise of free stuff. Students who borrow hand over fist are going to be let off the hook, while Social Security beneficiaries who already receive far more than they paid in are going to get a raise.

So are workers who are desperately hanging on to entry-level part-time jobs. Hillary is going to raise their wages to $15 an hour and then presumably supply them with unemployment benefits, food stamps and Medicaid when their jobs are offshored or robotized. Of course, the “rich” will pay for it all.

And when it comes to the most destructive “free stuff” of all, Hillary will surely be all in. That is, she will not lift a finger to stop the Fed’s 92-month running gift of free money to the Wall Street casino.

In fact, she believes the Fed’s serial bubble machine is leading the nation back to prosperity. Actually, it’s leading to the greatest financial bubble in human history. After years of ZIRP (zero interest rate policy) and a decade of Wall Street coddling and subsidization by the Fed, the windfalls to the 1% have become unspeakable in their magnitude and illegitimacy.

Yes, she has a deck full of empty talking points about how a Clinton administration will be there for Main Street, not Wall Street.

Hillary Clinton has spent a lifetime milking and promoting the state. She has no clue that it is the state itself, in the form of the rogue central bankers at the Federal Reserve, that is creating the wealth and income maldistribution and rampant unfairness she denounces. She has no clue that the Fed is strangling American capitalism and the opportunities to advance for those left behind that she so stridently voiced from the podium.

If Hillary really wanted to stop Wall Street’s unspeakable windfalls and bring a modicum of economic hope back to Main Street, of course, she would demand Janet Yellen’s resignation and promise to clean house among the enablers of casino capitalism at the Fed.