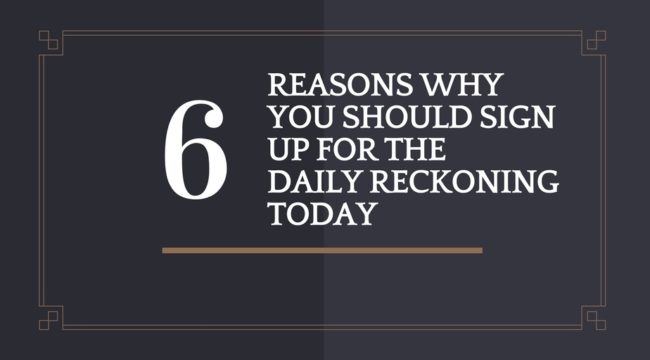 6 Reasons To Give The Daily Reckoning A Try Today

While the world’s distracted by Donald Trump’s latest tweets…The latest fad on Wall Street… Or whatever cable news networks have conjured up… The Daily Reckoning goes deeper than simply reporting the events of the day.

Since 2008, our forecasts have been featured by The New York Times, The Washington Post, Bloomberg, Fox Business and many other outlets. With good reason, too.

Our forecast track record is impressive, to say the least. We’re on record with our readers calling… The spike in gold… A shocking Brexit vote… And the historic election of President Trump.

If you haven’t signed up for The Daily Reckoning yet, here’s your chance. Join the conversation!

Sign up now — with the attached link — and we’ll send you FREE access to our rolodex of reports and analysis. No delay. No gimmicks, just to-the-point information and recommendations.

We address the elephant in the room, Donald J. Trump. Going beyond the tweets, the media rhetoric and whatever the mainstream is distracted with.  The Daily Reckoning offers just the right edge to move analysis, insights and even humor in today’s media coverage toward a new direction.

One of our editors, a former Reagan White House official — literally wrote the book on Trump. He continues to connect the dots between the world of finance and the decisions being made in Washington.

Love him or hate him, President Trump faces daunting political, economic and national security challenges. There’s a new challenge every day to the White House and we offer analysis not found anywhere else — while putting it all in context to your life.

One of our editors was in the center of London calling the Brexit vote — telling anyone who would listen exactly how things would unfold. Now that Brexit is formally underway, 2017 will be more important than ever for the world economy.

Brexit will impact markets, trade and the United States throughout the year. The insights and insider scoops from people on the ground will allow our readers to understand the real story.

While the media might be claiming the sky is falling, we’ll be there uncovering the real stories on the power players and your money.

During the Obama years a continuous resolution of “kicking the can down the road” became policy for passing the federal budget. As of March 15 the debt ceiling limit hit its legal deadline.

While the markets continue to rally in anticipation of a “Trump Stimulus” our experts have revealed a different story — one much more dangerous.

National politics are more polarized than ever. This will matter when the U.S government tries to generate a budget that either will pass, stall – or fail. As was the case in 2013, the government could grind to a violent halt, services could be shut off and the full faith and credit of the United States could be downgraded.

The Daily Reckoning offers Reagan’s budget director along with a team of Wall Street whistleblowers… All calling truth to power from those in Washington. We are uncovering what really matters to Americans in the face of a very real debt crisis. 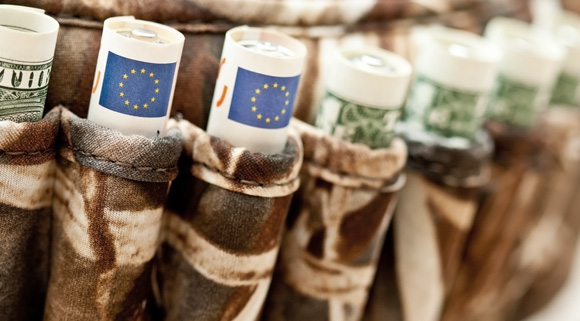 President Trump has identified China as a currency manipulator and a threat to the United States economy. As Trump continues to unveil his agenda in 2017 a Currency War between the United States and the communist government of China could heat up — and soon.

One of our editors wrote the book on Currency Wars and wastes no time calling the economic bubble in China for what it is — a disaster waiting to happen. The global threat of currency wars continues to escalate. Being informed by those who know how to best operate within such risky environments will better prepare you for the future.

Among the cast of characters whose insights we send out each day are a Harvard-trained geologist… a self-made billionaire… a Pulitzer Prize-nominated journalist, one of the world’s leading bond experts… an ex-banker to the presidents and the CIA’s currency war analyst… a 20-year US CENTCOM veteran and defense contracting exec with deep ties to Middle Eastern sheiks… a former managing director of Goldman Sachs… a former capitol hill staffer… and many more…

The Daily Reckoning offers its readers the opportunity to gain access to FREE reports. Each contains practical wisdom for every Americans concerned about government… spending that’s out of control… ridiculous national debt levels… currency war threats… and how to survive and thrive in unsteady times.

There are no gimmicks. No gotcha moments.  Just raw analysis. We value our readers privacy and will never share your email.

So what is The Daily Reckoning?

Each day the market is open, we send out the latest analysis about what’s really happening in the markets… Washington… and the world. We give a behind the scenes look from our insiders and world class editors.

What we do is take a different approach than what you’ll find within the pages of the mainstream media. We go deeper than simply reporting the narratives from today’s headlines.

We bring it back to why the world of finance and economics matters to you, the reader. We give meaning to your money and offer analysis not found anywhere else.