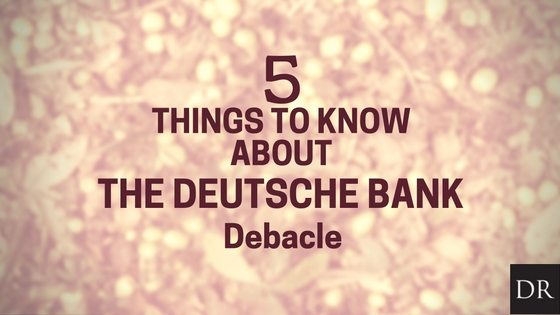 5 Things to Know About the Deutsche Bank Debacle

Deutsche Bank is the largest banking lender in Germany and one of the biggest banks in Europe.  The German banking goliath is also one of the most interconnected financial institutions worldwide and has reach in nearly every international market.

As discussion over whether Deutsche Bank will be allowed to fail, many reports go into details about comparisons to 2008’s financial crisis.  The BBC’s Simon Jack even called the bank the “world’s most dangerous bank” following an IMF report on German banking. The major fear is that the trouble Deutsche Bank has created could trigger a worldwide reaction creating a loss of confidence.

Here are five things you should know about the bank and why it is important to pay attention to in the coming weeks and months ahead. 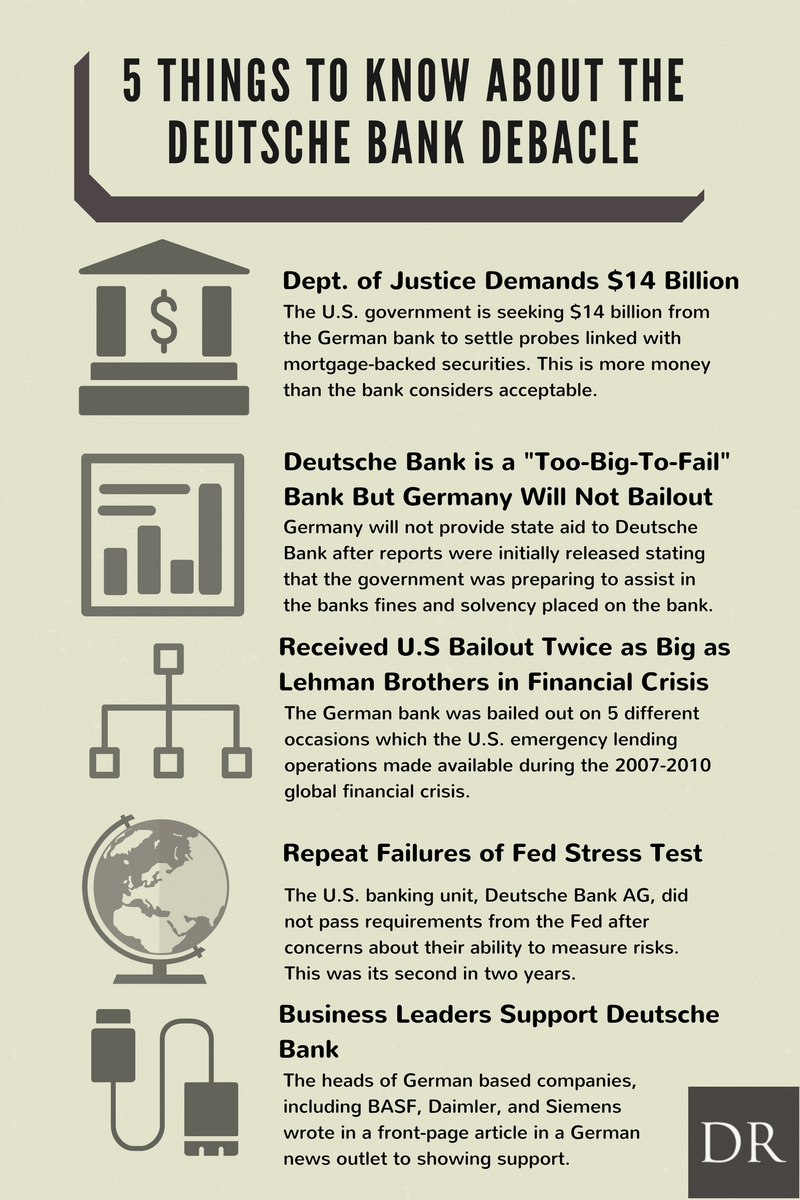 While the U.S Department of Justice (DoJ) is keenly aware that the massive german bank could not pay this sizable fine, it does know that the German government could.  Multiple media sources have reported that Germany could not afford to pay the fines demanded on behalf of the U.S government.  This statement as much a political argument as a financial one.  If the German government was to act, it would position its leadership under public scrutiny – but it could undoubtedly pay the charges for illicit activity.  The bank would like to reach a settlement negotiation with the U.S DoJ prior to the November 8th elections.

2. Deutsche Bank is a “Too-Big-To-Fail” Bank but Chancellor Angela Merkel says Germany Will Not Bail Out the bank.

According to a June 2016 IMF report the bank is a “global systemically important financial institution.”  That translates to the bank being extremely interconnected.  According to the same IMF report, Deutsche Bank could pose as a source of outward spillovers to most other publicly-listed banks and insurers if it was to fail.  The German Finance Ministry has said publicly that “The federal government is preparing no rescue plans.” According to data analytics firm Coalition, Deutsche Bank is the 2nd largest credit trading bank in the world. Deutsche’s outstanding derivative positions stands at around 42 trillion euros, that is only 12 times the size of the German economy.

3. The German Bank Received a U.S. Bailout Twice as Big as Lehman Brothers.

According to the Government Accountability Office (GAO), Deutsche Bank received loans totaling $77 billion under the Federal Reserve’s Primary Dealer Credit Facility (PDCF) and $277 billion in cumulative loans under the Term Securities Lending Facility (TSLF) for a total of $354 billion. According to the same report, Lehman Brothers received only $183 billion in Fed emergency lending.  The story of Lehman was the catalyst to the global financial crisis.  While Deutsche Bank might not be in the same position as the failed U.S bank, it is worth noting that the U.S government is just as vested in this private foreign business – and equally concerned over global stability.  The confidence that was lost in Lehman could very well be lost within Deutsche’s investors and stakeholders.

Deutsche Bank, along with fellow European bank Santander, both failed Federal Reserve required stress tests. The bank held vested interest in the U.S. with transaction banking and wealth management business operations that were both deemed failures under Fed requirements.  The Fed noted in its report from June 2016 that “the firm overall continues to have material unresolved supervisory issues that critically undermine its capital planning process.” In Fed speak, that means management is doing a poor job in structuring its operations in the instance that a crisis was to impact its business.  The German bank was then required to suspend dividend payouts to its shareholders in order to allow it to build up cash reserves.

German business leaders from companies including Daimler, Siemens and BASF have all lined up support for the bank.  Even the king of Wall Street himself, JPMorgan’s CEO Jamie Dimon noted that he could see no reason that Deutsche Bank could not get through its problems. “They have plenty of capital, plenty of liquidity,” Dimon said indicated during a phone interview on CNBC’s “Power Lunch” program. “We want all these banks to get through because it’s better for everybody.” All of this comes in the wake of a barrage of German press critically reporting on the troubled bank.

As Pam and Russ Martens don’t mince words in Wall Street on Parade saying, “Let’s be clear on whose shoulders those missing billions in fines against Deutsche Bank are going to fall. It’s America’s young people who will face a higher national debt and a lower standard of living because the U.S. government is now addicted to bailing out and propping up serially out-of-control global banks whose business models increasingly resemble that of a crime syndicate.”

They went on to slam the bank saying that, “Settling a $14 billion crime for $5.4 billion is, effectively, another U.S. bailout of a bank that has frequently gamed U.S. markets and fleeced taxpayers. In less than a decade, the U.S. national debt has skyrocketed from $9 trillion to more than $19 trillion today — much of that debt explosion coming from the effects of the banking crisis and the worst economic slump since the Great Depression.”

While it is highly unlikely that the German bank will be allowed to fail, understanding exactly what is going on, and how to position yourself through it will be important.  More headline news is certainly to come out in the ongoing disputes between the U.S government and its German counterparts.