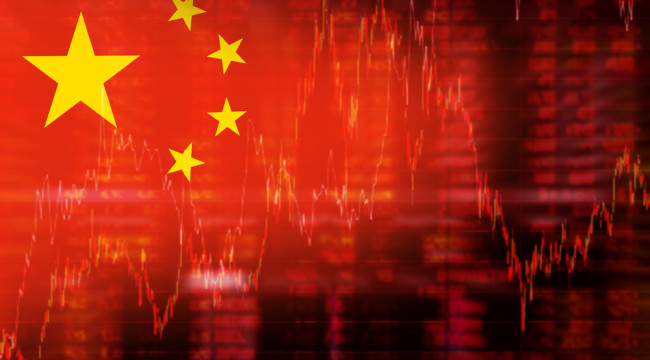 The world’s second largest economy is in trouble.

GDP growth is the slowest in six years…

There to backstop the market massacre (surprise, surprise) are the same people who inflated the Middle Kingdom in the first place: The Communist Party of China.

The world now waits with bated breath as the Commies show “rare courage” according to Reuters this morning, “to reform in the face of economic troubles.”

Like seeing the captain of a sinking ship rearrange the deck chairs, we watch the horror unfold.

Here are five “tools” the Chinese government is using to try to stem their economy’s implosion, and China’s stock market crash.

Be sure to read the whole thing, we put a cherry on top at the end. It’s a way to profit as the house of cards topples on itself…

A currency devaluation is when you cheapen the value of your money by printing more of it.

Earlier this month, Jeff Desjardins of the Visual Capitalist reported on the People’s Bank of China’s doing just that. The result was a tremor to run through the financial markets:

It all started …  as China moved the midpoint of the yuan’s peg by 1.9%, the biggest move since 1994. The PBOC called this change a “one-time adjustment” and said it’s fixing will now become more aligned with supply and demand.

They then proceeded to devalue the yuan two other times throughout the week for a combined 4.4% decrease in value.

Investors around the world were shaken up by the devaluation. Trading went haywire in the aftermath. Take a look at the carnage:

The next effort was cutting benchmark interest rates. China’s central bank, the People’s Bank of China (PBoC) did this. Their aim: Free up banks to lend more money to jumpstart the economy.

It was an aggressive two-part move this past Tuesday. The New York Times reports:

…The central bank also made a step toward interest rate liberalization by removing the upper limit on interest rates for fixed-term deposits of more than one year. With inflation in China generally low, the bank said the time was ripe for such steps. “This marks another important step forward in interest rate marketization reforms for our country,” it said.

So far, it’s failed to sustain stock gains or restore confidence in the market.

In the Australian edition of The Daily Reckoning, our friend Mat Spasic discussed the next tactic China employed to stop the rot, and why it’s ultimately ineffective:

…lowering rates and lending requirements is a short term measure. At best, it helps spruce borrowing in the short term. In the meantime, the real economy worsens. And it sets the economy up for a harder crash down the road.

The difference between China and Australia, or the US, is that it can ease its monetary policy further. Interest rates and capital requirements have plenty of scope to fall. At 4.6%, interest rates remain lower than in the US (near-zero) and Australia (2%).

Yet as we’ve seen in both the US and Australia, laxer monetary policy doesn’t work in the long run. It props up assets like stocks and property. But it comes at the expense of initiatives targeting real long term growth.

In July, China banned stock sales by major shareholders for six months. Yet another effort to stop the stock market rout. As early as July 8th, Bloomberg reported:

Investors with stakes exceeding 5 percent must maintain their positions, the China Securities Regulatory Commission said in a statement. The rule is intended to guard capital-market stability amid an “unreasonable plunge” in share prices, the CSRC said.

While China has already ordered government-owned institutions to maintain or boost their stock holdings, the CSRC’s directive expands the ban on sales to non-state companies and potentially foreign investors who own major stakes in mainland businesses.

The most dramatic effort to prevent investors from selling? Local exchanges allowing at least 1,331 companies to halt trading in their shares altogether.

Investors who borrow shares must now wait one day to pay back the loans, according to statements from the Shanghai and Shenzhen stock exchanges issued after the close of trading on Monday. This prevents investors from selling and buying back stocks on the same day, a practice that may “increase abnormal fluctuations in stock prices and affect market stability,” the Shenzhen exchange said.

China is taking unprecedented measures to stem a stock rout that has wiped out almost $4 trillion in market value since mid-June. Earlier on Monday, the Shanghai Stock Exchange warned two trading accounts for making a “large amount of sell orders affecting security prices or volume.”

There are even new restrictions on “algos,” or algorithmic trading. Those are computer-automated orders to buy and sell stocks. The new rule discourages algo trading because it means that short-sellers have to leave their bets open overnight, which in turn makes them vulnerable to any market-relevant news before trading opens up the next day.

Gabriel Wang, an analyst at research and consulting firm Aite Group, speaks on this latest restriction, explaining, “They are targeting algorithmic names given regulators suspect the naked short sellers are causing volatility.”

Wang also concludes that this new rule will hurt brokerages since it will cause a reduction in short selling, which cuts commissions. That’s about all though, since Chinese shares have still fallen since then…

Beijing made no moves in the policy action department, even when recent data that strongly suggested a downturn in the world’s second-largest economy was here and getting worse.

So what’s left to try? Lowering capital requirements for banks, of course!

Back to Mat Spasic over in the Australian edition of The Daily Reckoning:

The reserve requirement ratio (RRR) fell by 0.50% to 18%. The RRR simply refers to the amount of money banks must hold in order to lend. The PBoC has made it easier for banks to lend to borrowers.

China’s central bank lowered the amount of reserves banks must hold for the second time in two months on Tuesday, “The People’s Bank of China (PBOC) said it was cutting the one-year benchmark bank lending rate by 25 basis points to 4.6 percent, cutting one-year benchmark deposit rates by the same amount, and reducing reserve requirements (RRR) by 50 basis points to 18 percent for most big banks…

…the RRR cut was the most significant element of the PBOC action, as it would inject 650 billion yuan ($101 billion), into the economy and ease concerns of a “hard landing”.

The last, last ditch intervention effort by China on our list? Just throw money at the problem. Literally.

As the Wall Street Journal reports, China’s central bank injected the largest amount of cash into the financial system on a single day in nearly 19 months, this past Tuesday:

In a routine operation Tuesday, the People’s Bank offered 120 billion yuan ($18.77 billion) worth of seven-day reverse repurchase agreements, or reverse repos, short-term loans to commercial lenders in the money market.

The cash injection marks the biggest of its kind since Jan. 28, 2014, when the bank offered 150 billion yuan via 14-day reverse repos.

“There have certainly been capital outflows associated with the yuan’s recent weakening and today’s move by the PBOC is in response to the tightening liquidity conditions,” said Suan Teck Kin, an economist at United Overseas Bank in Singapore.

When it’s all said and done, the People’s Bank of China left a net addition of $210 billion yuan for the past two weeks, the most for open-market operations since February.

It’s not all gloom and doom, folks. Daily Reckoning editor, Peter Coyne, recommended an ETF as a way to bet against China on August 10, 2015 in our email edition. Read on:

…a new ETF was launched in June that’s an easy way for you make some money when it does. It’s called the Direxion Daily CSI 300 China A Share Bear 1x Shares (NYSE: CHAD).

CHAD is what’s known as an inverse ETF, meaning it goes up and the Chinese market goes down. It’s an easy way to bet against their market.

At writing, CHAD’s up 20% since Peter first recommended it. By his estimate, there are more gains to be had there too. Just wait.

So there you have it — fives signs of the Chinese government’s growing distress over sinking stocks and severely slowed economic growth.

You can prop up the market, you can inject cash, and you can keep kicking the can down the road, but all of these so-called efforts on China’s part are short term measures. They’re only setting themselves up for a more intense crash in the future, meanwhile the economy worsens each day.

P.S. When you sign up for the Daily Reckoning, you will receive just that; timely and entertaining ideas everyday that will help you understand how markets work. Did I mention it’s free? Because it is! Sign up here today to start receiving the Daily Reckoningto your inbox, completely free of charge.