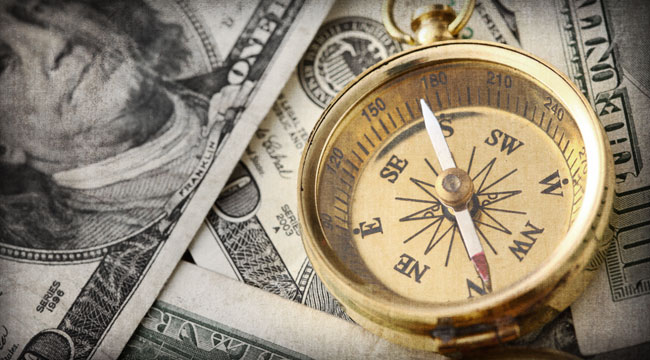 Yet the monetary conditions — inflation, printing and stimulus — that spurred gold’s historic climb are still with us. What gives? It’s like gold has caught a bug and just can’t get well.

It’s not a mystery what ails it, however. Let’s look at three reasons why gold is trading in the $1,200 range, and how these are the clue to our gold investment strategy. The first is the value of the dollar.

Just as gold protects wealth when times are tough, the dollar fuels growth in periods of stability. The momentum of each medium tend to be counteracting, since investors have to choose between one or the other. It’s no surprise that during gold’s drop from $1,875 to $1,210, the dollar index climbed 70% during the same time. 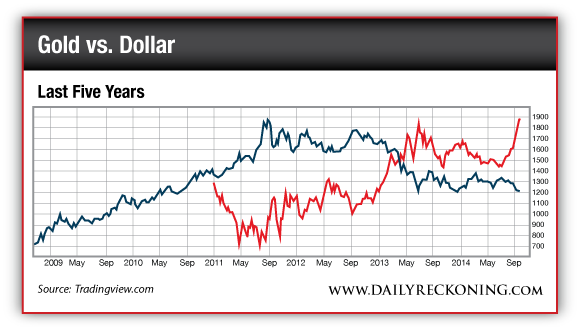 In short, investors will go where their bread is buttered, and while interest rates are low and fiscal stimulus is pumping throughout the economy, it’s dollar-driven equities. Why hunker down wealth in gold holdings when stocks are soaring high?

Even if surging share prices could be grossly inflated. Herein lies edge of the precipice of the next gold price breakout. Are these dollar driven equities performing as well as their stock prices show? Or are they inflated by a dollar that is merely faring the best in the race to the bottom between global currencies?

My colleague, and fellow resource guru, Matt Insley recently summed up what has influenced the dollar index’s steep climb: “The U.S. dollar index is heavily influenced by the euro — at over 57% weighting of the currency basket used to calculate the dollar index. The index itself hinges on the fate of the euro and the euro is in trouble.” Forget China! The dollar’s biggest influence (and conversely, gold’s) is the European Union’s economy and monetary policy.

The second thing that determines the gold price is physical gold demand. As we just showed, demand for gold is inversely correlated to dollar demand, which is driven by both U.S. and foreign monetary policies. But who’s buying the gold? India, for one, but more importantly, China, the world’s largest holder of U.S. government debt.

With more than $1.317 trillion in their reserves, it’s safe to say the Chinese have a vested interest in a strong dollar, but China’s gold buying habits reveal a bearish sentiment toward the dollar.

As I’ve detailed before, the sleeping dragon has recently amassed as much as 7,000 tons of gold, and China is not the only country in the East staking their faith in gold. During a period of declining gold prices, India officially imported $2.04 billion worth in August 2014, nearly three times more than the $739 million imported in August 2013.

Gold is particularly sensitive to political and financial fear.

Remember gold is not consumed in the same sense as oil, gas, or corn. Once the precious metal has been extracted from the mine and sent into the open market it will always be there. Only a very small portion of the gold that has been mined vanishes in shipwrecks or natural disasters. The rest is still floating around, causing demand to be more of a determinant of the price of gold than supply.

The third element that drives the price of gold is fear. Real or imagined, fear influences the decision making of most investors. Gold is particularly sensitive to political and financial fear.

The markets are at heightened risk now that ISIS controls 60% of Syria’s oil production and threatens Iraq’s. And let’s not forget the actions of our good friend Putin. With the annexation of Crimea and parts of Eastern Ukraine, whatever trust the west once had in Russia is gone, and it’s added lots of risk to Europe’s energy supply chain.

Finally, fear that the market can’t keep rising, even though the Fed keeps signaling that interest rates will remain low in the short-term, is driving some investors from stocks to gold. They may be premature, but all this fear is baked into the price of gold like a leaven. All in all, I’m still not committed to the bearish outlook on gold.

Ed. Note: I didn’t mention the most crucial fear driver of the price of gold. It’s the No. 1 threat to America, in fact. Forget ISIS, terrorist attacks, a new war or anything like that. The real threat is an “economic Pearl Harbor”… an event that could wipe out millions of unprepared Americans. Unfortunately the information is too sensitive to reveal here, but I was able to relay it to the members of The Daily Reckoning email edition. If you’d like to get a chance at this report, click here now and sign up for The Daily Reckoning, completely FREE of charge.