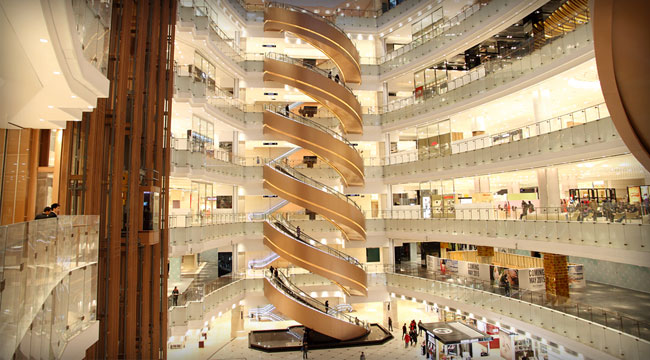 We begin with a confession: Your associate editor is a fashion junkie.

Even if you couldn’t give a hoot about fashion or celebrities, your news feeds have been no doubt been cluttered with coverage on all the outfits, most notably this festive number: 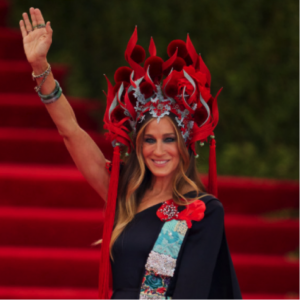 A lot of people consider fashion silly nonsense fluff, and perhaps you’re only vaguely aware of this event because your wife is squawking in your ear about wanting shoes just like the ones Kate Hudson is wearing.

But, as Vogue’s legendary Editor-In-Chief Anna Wintour is famous for plainly saying, “Fashion is a reflection of the time.”

Economics can be as crazy and confusing as Sarah Jessica Parker’s head piece, but if you start to pay attention, you’ll notice that seemingly unrelated issues, like trends in fashion, end up influencing other markets and providing new avenues from which to profit. You might want to listen up.

Every year show business’ biggest and brightest stars gather at the Metropolitan Museum of Art to celebrate and promote the featured, masterly-curated exhibit. This year’s theme was “China: Through the Looking Glass,” showcasing Chinese influences on Western fashions. Vanity Fair reports that there will be over 140 high-fashion pieces from names like Dior and Chanel, alongside their one-of-a-kind Chinese inspirations, like ornate 15th century jars and royal court apparel. 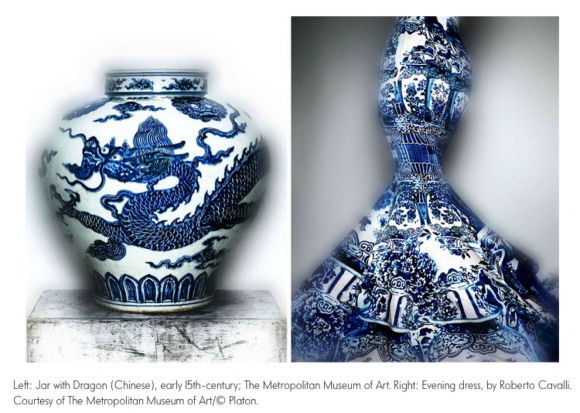 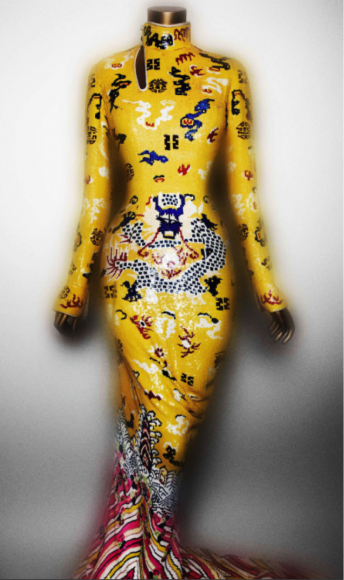 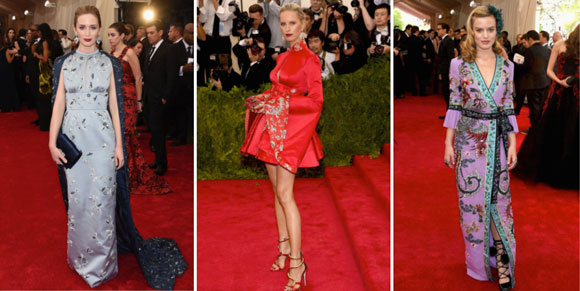 Emily Blunt, Karolina Kurkova, and Georgia May Jagger at the 2015 Met Gala

So why should you care that a bunch of skinny actresses got dolled up like geishas gone wrong?

Well, it could signal a major shift in the spending habits of the Chinese middle class. And when it comes to China, investors like you need to be paying attention to what they’re doing.

The met gala theme is typically rather arbitrary, but this year’s selection speaks to a larger economic trend in global consumer spending. New York Magazine’s The Cut interviewed Vogue’s legendary Editor-In-Chief Anna Wintour about this year’s theme, and this is what she had to say:

The idea to focus on China came with the opening of the Chinese markets to global luxury brands in recent years. Designers travel to Beijing to open a new store and then return home inspired. If much of fashion’s future is in that country, it seemed an appropriate time to look back and remember that there is a long history of Western designers drawing inspiration from the East.

So what does that mean for you as an investor, that much of fashion’s future is in China?

Over many decades, China has risen to power by being a mega-exporter and having cheap labor, but as of the last several years, the vast majority of middle and working classes Chinese are scrimping and saving their yuan for the promise of a brighter future, or the worry of a potential problem down the road.

But China’s leaders want and need these misers to open up their wallets and increase consumption in an attempt to boost their slowing economy.

Bloomberg reports that the Chinese, on average, put away 30.6 % of their disposable income, accounting to $6.9 trillion yuan in total household savings in China in 2012, according to Louis Kuijs (chief China economist at Royal Bank of Scotland in Hong Kong). This is up from 23% a decade ago. What’s more, household consumption only accounts for 35.7% of GDP, compared to 50-60% in most other countries.

Working Chinese are putting away almost half their earnings, one reason being that earning a decent return is pretty damn hard. With inflation, Chinese households earn almost zip on bank deposits, and a one-year deposit rate offers only 3%.

Now that the economy is growing and so many of China’s people have been saving, Chinese leaders are trying to transition to a consumer economy, and the government is taking real steps to reform the current system — like expanding health care and pension plans — so people will not feel as pressured to put so much of their earnings away for a rainy day.

According to Wintour, it is the luxury goods market that will unleash Chinese spending power.

As we mentioned, Chinese consumers only recently started earning enough to go out and splurge it. The middle class is expanding, the number of millionaires continues to soar, and the country and culture itself is well aware that branded, high-end goods designate social status. The Economist corroborates this Chinese affinity for anything luxe, writing:

Ask any luxury retailer where their most valuable customers are from and most will say China. The post-2008 years have not been the easiest for luxury brands, but China’s apparently unquenchable thirst for all things bling has made up for the slowing down of European consumption. By some estimates, half of the world’s luxury spending will come from Chinese wallets by next year.

The slowing Chinese economy and an official crackdown on corruption and lavish gifting has tempered the luxury market after years of double-digit growth… But whereas what aostentatious displays of wealth may be less common at the top end of the market, the new Chinese middle classes still see luxury goods as a way to show they have made it. ‘Dior and ‘Rolex’ remain popular search terms on Chinese microblogging sites…[and] the Chinese shopping-spree looks set to continue.

With a burgeoning middle class clamoring to get the latest designer purses into their hot little hands, and updated government programs that allow for looser savings and freer spending, luxury goods markets could be the next niche investing strategy to look into.

In an article detailing what trends we can expect from China in 2015, JumpStart Magazine wrote, “China is moving away from low-cost mass production for export and agriculture and into a service economy. This includes research, telecommunications, tourism, retail and luxury goods as the major contributors to GDP… The Chinese consumers want industries that can provide them with the sophisticated goods and services they demand, but also to supply the superior status they seek as proud Chinese within the world stage.” 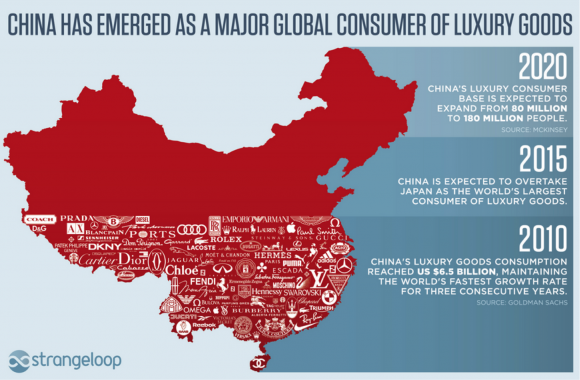 Consider the first quarter numbers from LVHM — that’s Moët Hennessy Louis Vuitton — the world’s leading high quality products group. They recorded a 16% increase in revenue for the first quarter of 2015, and organic revenue growth was up 3% compared to the same time last year.

According to Yahoo Finance, LVHM’s Fashion and Leather Goods business group grew with brands like Fendi and Givenchy, and the Watches and Jewelry business group recorded revenue growth of 7% in the first quarter of 2015.

For the last five years, LVHM (NYSE:MC.PA) has been on a steady upward trajectory. “For sure, luxury-goods growth is still soaring” reported the Wall Street Journal in 2012, “LVMH, which sells luxuries ranging from Champagne to perfume and watches, said its group sales jumped 25% in the first quarter to €6.58 billion from €5.25 billion a year earlier… and sales in Asia rose even faster, at 17%.”

Just last year the Wall Street Journal reported that French high-end luxury goods retailer Hermès is poised to open five new stores in China by the end of 2015, with one store each in Beijing and Chengdu, as well as one or two the following year. This is in addition to the 21 stores the company already maintains in China.

It appears the church mouse lifestyle once mainstream in China is starting to loosen up and live a little. Back in February of this year, U.S Global Investors’ Frank Holmes reported that, “According to the National Retail Federation, China spent approximately $100 billion on retail and restaurants during the Chinese New Year in 2014. That’s double what Americans shelled out during the four-day Thanksgiving and Black Friday spending period.” 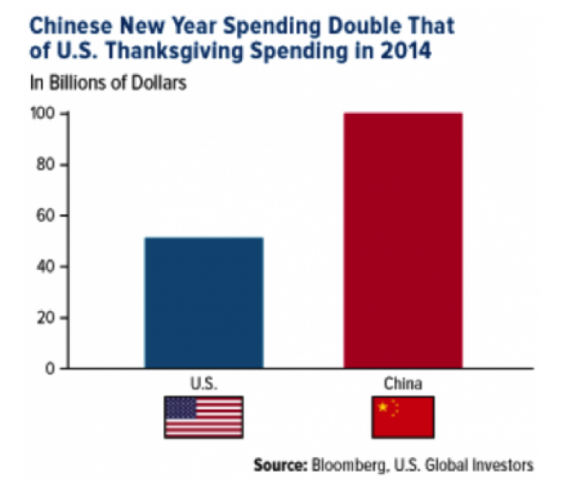 In January of this year, Bain and Company conducted a survey of 1,400 Chinese consumers that corroborates the notion that the Chinese are ready to buy luxury goods again. The survey revealed that “nearly 45 percent of respondents plan to buy more emerging luxury brands in the next three years,” and according to Bruno Lannes, a Bail partner and author of this luxury study, explained that, “The field of luxury brands in China is breaking wide open. This creates a new window of opportunity for emerging brands.”

With a government that’s dead-set on morphing their citizens from savers to spenders, and the official word of luxury being back in business in China, now could be a good time to talk to your broker about investing in luxury goods brands for the long haul. All the big names in economics are reporting it, and now you’ve heard it from the end-all be-all voice in the global, multi-billion dollar fashion industry. Anna Wintour doesn’t mince words — the Chinese people are ready to spend, and they’re ready to spend on Prada.

P.S. Global market trends can be fickle, so it’s important to stay up-to-date on what’s happening in the financial world each and every day. Signing up for The Daily Reckoning helps you do just that. Enter your email here to receive your daily issue of The Daily Reckoning newsletter straight to your inbox, completely free. We’ve been working on a new premium suite of special reports, exclusive to DR subscribers, that will provide the insight and advice you need to face and profit from today’s uncertain financial times. It’s 100% free, sign up here today.