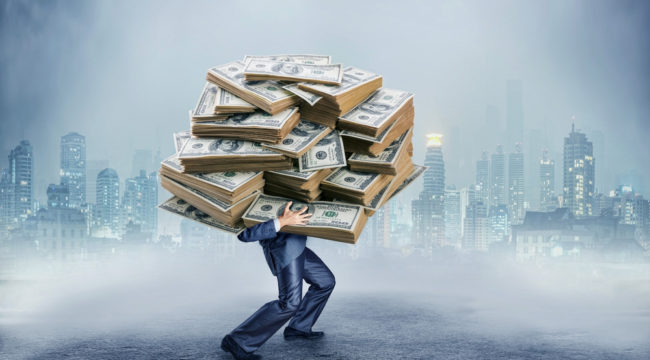 There’s an excellent chance you’re making a huge mistake with your investments right now. I believe you could easily make multiple times more money by turning in a totally new direction.

It’s based on one simple approach I like to describe as a “backdoor.”

In fact, this is something I’ve personally used to go from having almost zero in my bank account (and being totally desperate) to making $80,000 a month on average and completely changing my life. In fact, by now I’ve probably made about $15 million with this backdoor approach altogether.

So let’s get right to it. About ten years ago, I found myself in kind of a difficult situation…

I was going through a divorce… raising a young daughter… and I needed more money to get by. I had about $2,000 — and I was looking for a way to basically just multiply that money as quickly and safely as possible.

But here’s the thing: I didn’t want to buy ordinary stocks and bonds.

And I wanted to try something new. so I did something that’s completely off-limits for most people. You may not even realize it’s possible for your own situation right now — but I promise you, it is.

And that is, I turned to Silicon Valley. Now, we’ve all heard about the money that can be made with startups. Not only by the companies themselves — like Uber, Airbnb, Dropbox, whatever — but the folks who invested in those startups early on.

It’s incredible, but if you just look at Uber, the taxi service, for example, every $1,000 investment at the beginning could have been worth $4.5 million. Which is 4,500 times the initial money.

Or look at Dropbox, the file sharing company. A $5,000 investment at the beginning could have turned into $77,350, which I don’t need to tell you is a lot better than you’ll get from most ordinary stocks and bonds.

So naturally, I wanted a piece of the action. And by 2007 — after months of poking around — I finally found a way in. I took my $2,000 and made a single investment from my home computer, and walked away with a profit of ten million dollars in nine months.

One investment, and I literally became a multimillionaire. So the big question is: How did I pull this off?

I don’t live in Silicon Valley and I don’t have an MBA.

Now, if you didn’t know me, it would have seemed like I just got lucky. And to be clear, making extraordinary gains like this doesn’t happen every day or with every opportunity.

But the reality is, I pulled this off by taking advantage of a situation that most conventional investors still have no clue about.

And that is: We no longer live in the old-fashioned economy we grew up with.

The old economy is gone. In the old days, if you wanted to get rich as an investor, you looked for a great publicly traded company with a great product or service, and you tried to buy at a great price.

But I’m here to tell you there’s something a whole lot better. And it’s all based on what’s been happening in our society. You see — somewhere in the last 20 years, without any announcement, we switched over to a completely new type of economy — which I call the “Idea Economy.”

The Idea Economy doesn’t reward buying investments using the old-fashioned metrics our parents or grandparents looked at, like an article in the Wall Street Journal or a talking head on TV.

In the Idea Economy, all the ten-baggers, the twenty-baggers, the chances to make 50 times your money — they’ll all go to the investors who can spot the best ideas before anyone else.

That’s what drives our society now: Ideas. A new way of finding a taxi… A new way of booking a hotel room… A new way of communicating with people. Those are all big ideas with huge potential to make you money.

So how do you spot a big idea?

Well, if you look at history, you’ll see that the best startups always begin with one particular type of idea, which I call the “breakthrough” idea, one that can disrupt or revolutionize society in some way.

And as it turns out, there’s an incredibly simple way for you to find and invest in these ideas no matter who you are or what your experience.

Smartphones have revolutionized the way we communicate in recent years, right? Well, suppose you’d wanted to invest at the beginning. If you’re like most conventional investors, you’d have done it the old-fashioned way, and bought the stock of a smartphone maker like Apple.

But here’s where it gets interesting. If you look at Apple, you’ll see that smartphones are only one part of their business, right? They’re also focused on dozens of other products and ideas.

Computers, tablets, there’s talk of a car and so on. So Apple isn’t a “pure” investment in smartphones. What they’ve done is taken the idea and diffused it among other ideas.

Now, most people have never heard of Xiaomi — but not long ago it was a startup, one of the best new little companies in the world. And all they focus on is smartphones. On the surface, they look like Apple. But they’ve cut out everything else Apple is doing to focus on just one thing as a company: Smartphones.

Why should you care about that? Because Xiaomi was up 3,186% just a couple of short years after the beginning… which was enough to make investors 32 times their money.

In other words, by looking away from a multi-idea company like Apple, and investing in just one pure idea through a startup, you could have made 5 times more money.

Pretty amazing when you consider that Apple is the #1 brand in the world, yet this little-known startup could have made investors tens of thousands of dollars more.

And we’re seeing this in multiple sectors…

And Airbnb — the startup that’s changed the hotel industry — has been up an incredible 700,000%!

All of those gains are 10 to 20 times higher than that of ordinary Blue Chips in their respective industries over the same period. What this means is that focusing on just one single breakthrough idea makes for a very powerful investment in today’s economy.

But there’s one problem…

How do you get into these things? If you don’t live in Silicon Valley or you don’t work at the company yourself, how do you even hear about the best new startups, before it’s too late?

You see — the problem with Silicon Valley is that startups are typically off limits to regular investors. The government has this stupid rule called Rule 501 of Regulation D, which won’t let you invest in startups unless you’re worth at least $1 million, or unless your income has been $200,000 or more for two years.

Of course, the government created this rule to supposedly “protect” individual investors. But the reality is, all it’s done is made sure that only rich people get the biggest gains, like bankers and venture capitalists.

And personally, I don’t think that’s fair. So back when I was sitting at my kitchen table ten years ago with my $2,000, thinking of ways to invest, I came across something pretty fascinating — which has changed my life.

You see — in Silicon Valley there are always hundreds of different ideas being tested out by startups. But under Rule 501, if you were to hear about one of those ideas and wanted to invest, you’d be totally excluded unless you’re what’s known as an “accredited investor” — someone worth a million dollars. Again, not fair.

But as it turns out — it actually doesn’t matter. Because what I’ve discovered is that for the top 1% of startup ideas — the breakthrough ideas that revolutionize society — there’s almost always a “backdoor” in the market that allows you to invest in that same idea on your own, online.

It doesn’t matter what your wealth is, your income, your experience.

But you’d still have the same potential for massive gains as the big boys. It’s almost like a way of “sneaking into” these investments… without having to be an accredited investor.

I could give you literally a dozen more examples of “backdoor” investments available right now. So, if you take away just two things from this article today, let it be this.

First, the biggest gains you could make right now come from the “Idea Economy”… the breakthrough ideas that will change society.

And second, you do not have to be rich to take advantage of these ideas. For the top 1% of the best ideas, there’s almost always a “backdoor” available online that allows you to invest from your home computer and potentially make 5 to 10 times your money.

Now,  you probably have the same question most people ask after hear me talk about this…

What is the “backdoor” I discovered? How do you find it for the best startups… and how could it realistically change your wealth?

Well, I’m going to explain it all this Thursday, just two days from now. Including how you can use this backdoor secret yourself, starting immediately.