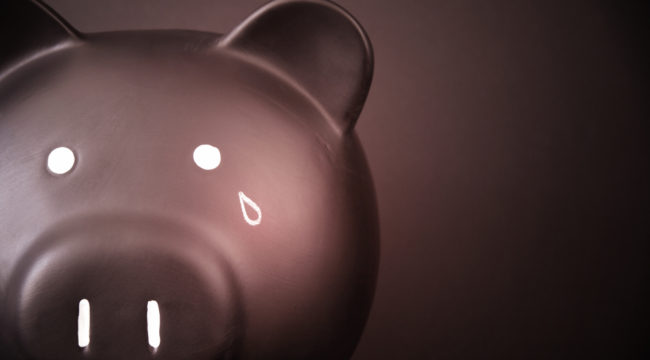 100% Chance of Recession Within 7 Months?

We asked this question one week after Trump was elected:

“What does history predict for the Trump presidency?”

The answer we furnished — based on over a century of data — was this:

A 100% chance of recession within his first year.

That answer came by way of a certain Raoul Pal. He used to captain one of the largest hedge funds in the world.

Crunching 107 years worth of data, he showed the U.S. economy enters or is in a recession every time a two-term president vacates the throne:

Obama was a two-term president — if memory serves.

Only two incoming presidents were not treated to a recession within the first year of office. And both followed one-term reigns:

Maybe it takes two terms for presidential mischief to work its way into the economic machinery.

Regardless of the reason, this fellow’s research pointed him to one conclusion:

“It is not a coincidence.”

Trump’s now five months into his first 12. Where does the prediction stand?

By grace of God or Janet Yellen or neither or both, no recession yet.

But our pessimistic side reminds us that seven months remain. And anxiety riles the deeps of our being…

Over the past five decades, each time commercial and industrial loan balances at U.S. banks shrank or stalled… a recession was either already in progress or would start soon. There has been no exception since the 1960s. Last time this happened was during the financial crisis.

Last month commercial and industrial loans (C&I) outstanding fell to $2.095 trillion, according to the St. Louis Fed. That’s down 4.5% from their November 2016 peak, says Wolf.

And it marked the 30th consecutive week of no growth in C&I loans.

Wolf argues C&I loans matter because they directly reflect the real economy — unlike today’s stock market, which is crooked as a Brit’s teeth. 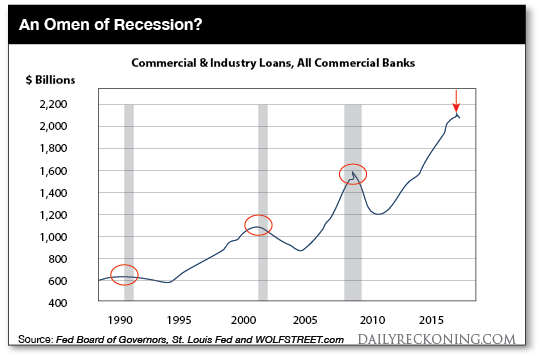 Tuomas Maln is CEO of GnS Economics. He argues that today’s credit flows of commercial and industrial loans have not been this negative for 27 years… outside a recession anyway.

Sometimes credit flows turn negative before a recession, he notes. And sometimes after.

During the 2008 crisis for example, Malinen notes that credit flows didn’t veer negative until the economy already entered recession.

But before the shorter recessions of 1990 and 2001, he says credit flows started falling three–six quarters before the recession.

Overall though, Malinen says the relationship between negative credit flows and recessions holds true since 1948.

And here’s where the needle scratches the wax:

The current decline in the credit impulse started in the third quarter last year. Thus, the U.S. economy may be just one–two quarters away from a recession.

Is the economy just one or two quarters away from recession?

That would put it within Trump’s first year in office — and keep the 107-year record perfect.

First-quarter GDP grew at a slender 1.2% annualized rate. Not recessionary — but growth at a tortoise pace.

In March the New York Fed guessed (that seems to be just the right word here) that second-quarter GDP would bloom just under 3%.

But last week it had to downgrade its forecast… to a mere 1.9%.

We wouldn’t be the least surprised if they have to downgrade it again. That seems to be the pattern.

The economy only expanded 1.6% last year.

And since they keep having to revise their forecasts lower… would you be surprised if the economy doesn’t grow at all this year?

Or worse, if it actually enters recession?

Remember, 107 years of history say it will…