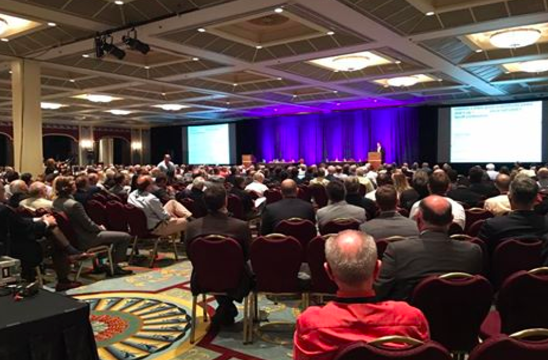 “If You’re Not a Contrarian, You’re a Victim”

The Daily Reckoning has taken up temporary headquarters in the fair (and humidity-free!) city of Vancouver, Canada…

It is here where some of the world’s brightest stars in finance and natural resources gather to spot market omens… read tea leaves… and announce the way to riches.

Our own Jim Rickards and David Stockman are keynote speakers this week here in Vancouver.

Your editor enters this week’s proceedings in the role of fly on wall.

We hope you can put the information to good use.

It’s the next best thing to being there yourself, we dare say — without having to purchase an admission ticket that can only be described as expensive.

The Sprott conference tends to attract what you may call “contrarians.”

No surprise, that, given the mantra of Rick Rule, Sprott’s CEO and conference host:

If you’re not a contrarian, you’re a victim.

Many fancy themselves contrarians. Few are in reality.

The embrace of the herd proves too seductive for most — safety, they intuitively sense, lies in numbers.

But there are certainly some contrarian-looking folks on hand.

We observed an eccentric or two yesterday, some with odd crotchets easier witnessed than described.

There was this one fellow who — no — we’d better not say.

But given the price of an admission ticket… these must be wealthy eccentrics.

But to the conference itself…

Several fellows spoke yesterday. These included Rick Rule himself and other CEOs of precious metal companies.

If there was one central nugget to emerge from their briefings, it is this:

Projected mining supplies will struggle to meet rising demand for precious metals in the years ahead.

For example, David Garofalo, CEO of Goldcorp, claimed that the gold sector has seen a one-third decline in its reserves over the past five years.

He further projects that gold production industrywide will decline 15–20% over the next few years.

That is, gold production will decrease, and it could be years and years until new gold reserves come to market.

We thus confront the possibility of “Peak Gold”: 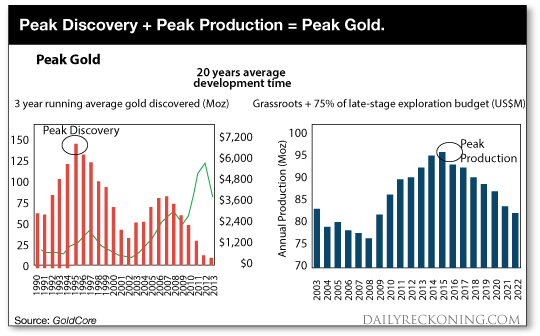 This is exactly the drum senior geologist Byron King of Rickards Gold Speculator has been pounding for quite a while.

Byron noted earlier this year that 2016 was the first year mine production fell since 2008.

And quoting a Thomson Reuters report, Byron notes there are:

Few new projects and expansions expected to begin producing this year, and those in the near-term pipeline are generally fairly modest in scale, hence our view that global mine supply is set to continue a multiyear downtrend in 2017…

Add it all up and you have a recipe for falling production.

Patrick Donnelly, president of First Mining Finance Corp., confirmed yesterday that no major gold deposits have been discovered in the past 15–20 years.

Robert Friedland is the founder and executive chairman of Ivanhoe Mines.

A capital fellow, this Friedland. A speaker of the first cut and caliber.

He struck every note precisely in the middle.

He told thumping tales and commanded a crowd of hundreds as easily as gravity commands a cannon ball. 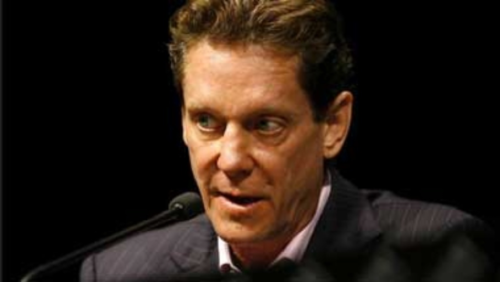 And Friedland says the demand for metals like platinum, copper and cobalt will soon vastly outrun supplies.

Friedland flashed a picture of a sunny day in Beijing. 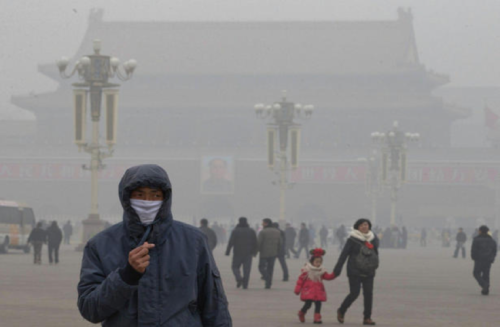 Pollution now chokes the air of China’s major cities so badly a person can barely take the oxygen out of it.

And he said this pollution’s effects cost some $5 trillion every year.

60% of urban air pollution is caused by the internal combustion, he added.

So places like China will be spending mountains of money on clean energy to liberate the lungs and restore the sun to its throne in the sky.

What does that have to do with platinum and copper?

Because the critical components of many clean energy technologies require metals like platinum and copper.

Friedland said mass-produced electric cars will be in operation by 2023 — six years from now.

He said it will be a “massive disruption.”

He compared it to the speed with which the automobile replaced the horse around the turn of the 20th century.

And that of course presents a handsome opportunity for investors…

Once again… a recipe for dramatically higher platinum prices.

What has been the best-performing metal for the past 12 months, according to Friedland — better than gold or any other metal?

Cobalt is used in lithium batteries for electric cars.

No coincidence it would seem.

For these reasons, Friedland expects metals prices to rise substantially in the coming years.

And by our lights, their case is compelling…

Tomorrow, the most important ideas from day two…