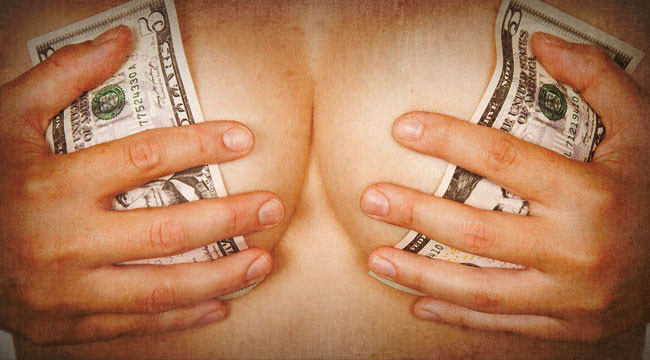 I was in Uruguay and then Buenos Aires, Argentina, last week (and the issue includes an idea I picked up down there). I met with a variety of interesting people on this trip. One of them is a guy who writes a blog from Buenos Aires, OfWealth.com, under the pen name “Marco Polo.”

He lives in Buenos Aires, but he is not Argentine. He’s an experienced global financial investor and lived in Hong Kong for a time working for a large investment bank. I can’t tell you much more about him than that, because he doesn’t want me to. But I can share with you our conversation, which included some interesting bits about the U.S. dollar.

I met Marco at La Cabrera, an excellent restaurant in the Palermo neighborhood. (This barrio takes its name from an old abbey that dates from the 16th century.) At La Cabrera, of course, we ate great steaks and meats for which the country is justly famous. We started with chorizo and morcilla. (The latter is a Spanish blood sausage.) I have to say: I’ve had blood sausage all over the world, and at La Cabrera I had the best morcilla I’ve ever put in my mouth. 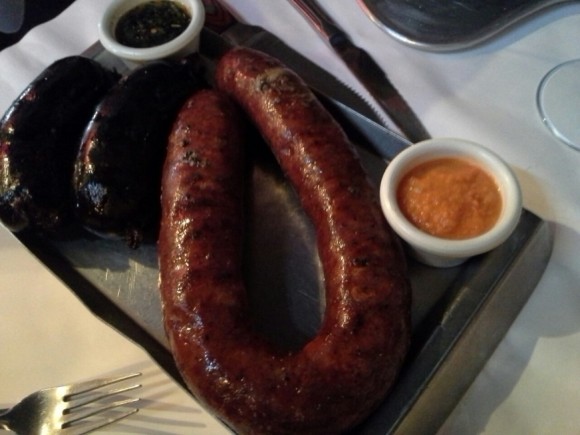 Morcilla and chorizo at La Cabrera. The morcilla (the blood sausage) was the best I’ve ever had…

Eating in Buenos Aires is very cheap for those of us who pay with U.S. dollars. There were four of us. We had appetizers, steaks, sides, two bottles of wine and coffee afterward. It cost $100. Total. For that kind of meal in America, it would’ve been $100 each.

Which brings us to the dollar.

The Argentines live with super-high inflation. Officially, it’s around 10%, but on the ground, it’s closer to 25%. As Marco explained it, the Argentine government prints a lot of money — literally prints it. The physical volume of peso notes, for example, is up by more than a third in the last year. The 100-peso note, the largest denomination, has increased by more than a quarter. 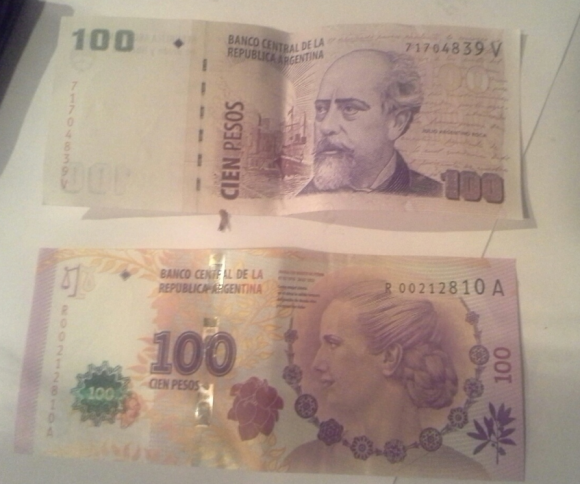 The old 100-peso note and the new, with Eva Peron. The change has not helped the purchasing power of the peso, which continues to fall.

The physical amount of currency is important because people transact so much business in cash. It’s easier to protect your anonymity in a country with a taste for authoritarian government.

So guess what their favorite alternative currency is?

“With price inflation running at around 25% a year, a large black market economy and peso savings accounts that pay 10-15% less than inflation, there is plenty of demand for dollars.”

Marco told me that Argentines hold one out of every 15 printed U.S. dollars. “The problem is the current government has made it impossible to buy dollars legally since late 2011,” Marco writes at OfWealth.com. “With price inflation running at around 25% a year, a large black market economy and peso savings accounts that pay 10-15% less than inflation, there is plenty of demand for dollars.”

Plus, the official exchange rate is robbery. So what to do?

“Enter the so-called ‘dolar blue,'” Marco writes. “This is the parallel exchange rate that Argentines must pay in shady backrooms if they want to convert their pesos into dollars.” You get 60% more for your money at the “blue” rate.

It’s a crazy thing, but the Argentines have adapted. They are used to this stuff, after all. Argentines have suffered every imaginable monetary malaise. Hyperinflation, banking crises, debt defaults and more.

“The last meltdown was in 2002,” Marco writes. “The currency collapsed, dollar bank deposits were ‘peso-fied’ and rioters were burning tires in the streets and shooting at the shuttered entrances of the banks.”

They’ve learned not to trust the colorful peso. And they look to preserve their wealth by owning real stuff such as real estate, art, gold and, apparently, U.S. dollars.

“The average taxi driver in Buenos Aires understands more about financial mismanagement than the crowd at a conference of Nobel Prize-winning economics professors and central bankers,” Marco says.

Americans have yet to learn these lessons. Ours is a culture still much too trusting of central banks and paper money. Most Americans don’t understand what the central bank really does. Or how the banking system functions. They don’t get how they are being robbed. They are more likely to blame higher prices on the oil companies or foreigners. They don’t see that the cause is the government’s money printing. This reminds me of that old line from Henry Ford. If Americans really understood the banking system, they’d revolt.

(Or as he put it: “It is well enough that people of the nation do not understand our banking and monetary system, for if they did, I believe there would be a revolution before tomorrow morning.”)

The thing is there is more similarity than you might guess between the two the countries. And in some of these comparisons, the U.S. does not come out looking the best. Marco ran some numbers on the debt of both, for example.

Indeed, we wondered if the U.S. dollar might one day go the way of the peso…

“That’s not to say that the USA is likely to have an Argentine financial crisis any time soon,” Marco said. “But it pays to remind ourselves that it’s not just down on the pampas that public finances are being mismanaged. After all, Argentina was one of the richest countries in the world 100 years ago.”

Might the Argentina of today be a glimpse of some dystopian American future? A warning for us all?

P.S. The future of the U.S. economy is uncertain, at best. And headed for this “dystopian future” I mention, at worst. Best to prepare now, no matter what happens. That’s why I gave readers of The Daily Reckoning email edition a shot at my new investment strategy. One that pays you royalty checks, regardless of the noise in the markets. If you’re not getting the DR email edition, you can sign up for FREE, right here… and start getting all the incredible profit opportunities that come along with it. So don’t wait. Your next email is just a few hours away.