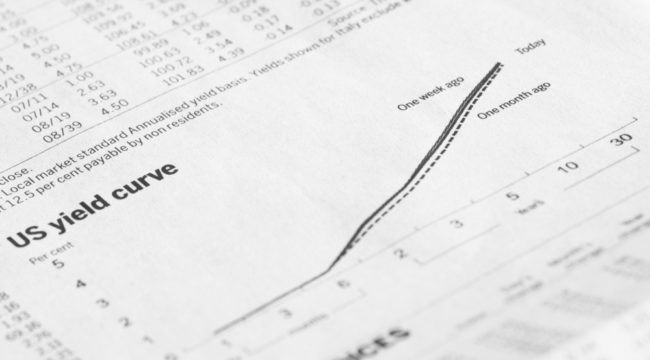 What the "Yield Curve" Predicts for the Economy

Two conflicting visions of the economy. One good. One bad.

Which is right? Which is wrong?

The U.S. economy has posted consecutive quarters of 3% real GDP growth — the swellest two-quarter average since 2014.

Housing permits — an even truer barometer of the housing market — increased a thumping 5.9%.

The future is a rosy dawn place, this fellow concludes.

But litigant No. 2 draws a cloud across this sunshine by introducing an unimpeachable witness to the proceedings:

If the economy gives off such a glow, asks he… why is it not reflected in the bond market?

But at 2.37%, the yield on the bellwether 10-year Treasury is not only lower than a year ago… but lower than a month ago.

Therefore, argues this fellow, Pollyanna’s case wobbles on its axis.

The data are a distortion, a fleeting mirage.

He then summons another creature of the bond market — a possible omen of recession — to advance his bearish case:

Since December 2015 the Federal Reserve has been increasing the interest rates it influences directly — short-term rates.

Markets also forecast a 91% chance of another 0.25% rate hike when the Fed meets next month.

Many analysts expect three or four hikes next year.

But the small short-term hikes have failed to fluster the bigger fish — both 10-year and 30-year Treasury yields have declined this year.

Why the big deal?

Because most consider a flattening yield curve an omen of lean times ahead.

A flatter yield curve is viewed as a sign of upcoming weakness… If long-term and short-term rates are close, markets must be expecting little growth…

And despite the recent positive economic data and all the angels and saints… the yield curve is flattening.

Stocks roar to new highs. Tax cuts advance in Congress, I think. Consumer confidence revs while unemployment plumbs its lowest levels in decades. Yet the yield curve just doesn’t seem to be buying it.

Growth is moving at a solid clip and the labor market is ostensibly at full employment — so why aren’t we in an environment with a steeper curve and higher yields?

But is a flattening yield curve an immediate menace, a storm cloud overhead?

Not necessarily, say the experts. Not yet.

The yield curve was extremely flat during the second half of the 1990s, a stretch of high growth. Only late in that period did the yield curve invert, finally foreshadowing the 2000 recession.

According to Bank of America, an inverted yield curve has preceded recession on seven out of seven occasions over the past 50 years.

Not a record to be sniffed at.

The yield curve last inverted in early 2006. The economy was sunk in recession less than two years later.

It previously inverted in 2000… before that year’s recession.

With the Fed likely to raise interest rates in December, and then perhaps another three or four increases in 2018, the yield curve could invert this time around as soon as the second half of next year.

Lacy Hunt, chief economist at Hoisington Investment Management, also believes the curve could invert within a year — if the Fed tightens as planned.

So here is the larger lesson of the flattening yield curve…

Otherwise it could invert the yield curve… and, if history is a reliable witness, court recession.

So unless long-term interest rates begin to rise along with short-term rates, the Fed is trapped.

And it will have little “dry powder” to combat the next recession — whenever it comes.

So… are you sure you want that job, Mr. Powell?