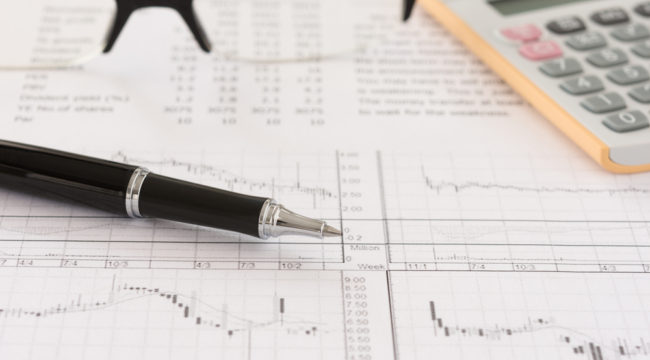 Watch Out for These 3 Broken Trends…​

Trump packed his bags and left Washington this morning.

No golf for the president this weekend. Instead, he’s travelling to Saudi Arabia. Then it’s off to Israel, Italy and Belgium.

The fake news calls it a “do-or-die” trip for The Donald. But the scandalous headlines from earlier this week have died down. Without any fresh meat, the press has no choice but to feed its angry readers a pile of spoiled leftovers.

That means its back to business as usual for the markets. Stocks have been downright tame since Wednesday’s drop. Futures are creeping higher once again this morning, pointing to another modest recovery for the major averages to wrap up the trading week.

Many of the strongest trends remain intact. But if we dive below the surface of the major averages and the market’s leading sectors, we’ll find a few key groups that are vulnerable to further downside action…

The buck jumped to 13-year highs after Trump won the election.

“At least part of that appreciation was attributed to markets reacting to Trump’s proposed fiscal policy initiatives,” Business Insider reports. “However, the index has been giving up those gains over the last few months.”

After it’s torrid run, the U.S. Dollar Index topped out during the final trading week of 2016. It’s leaked lower ever since… 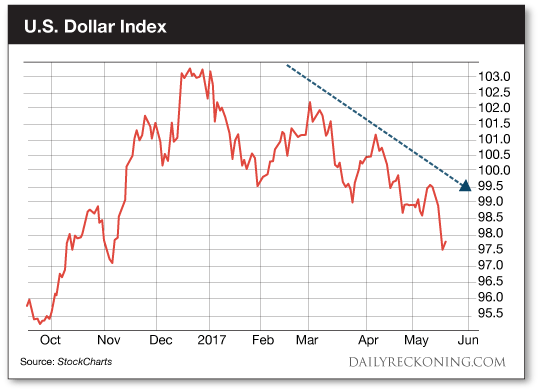 Loose lips aren’t helping the greenback pull out of its slide, either. Last month, Trump commented that the dollar was “getting too strong”. That comment led to some damage control from Treasury Secretary Steven Mnuchin, who later insisted that Trump’s not trying to talk down the dollar.

Any way you slice it, the buck has stopped rising. Despite yesterday’s relief rally, it remains right at its 2017 lows…

After last summer’s Brexit bottom, the Dow Jones Transportation Average was one of those down and out groups that started to power higher. Transportation stocks like airlines had been absolute dogs for weeks. But as the market bottomed out, these stocks began to outperform the major averages once again.

At the time, it was important for the lagging transportation stocks make up for lost ground. After all, transports endured an actual bear market as the major average chopped along for the past two years.

But the transports have lost their mojo. The Dow Jones Transportation Average topped out more than two months ago. This false breakout led to a swift move lower: 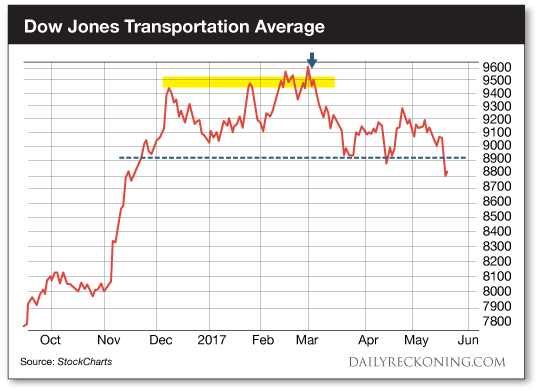 As of this morning, the transports are down more than 8% from their peak in early March. That’s close to correction territory. This week’s drop hit transports especially hard, helping to drop the average to prices we haven’t seen since November.

The idea is that the two groups combined can measure the overall health of the economy. If the industrials are performing well along with the transports, we can assume goods are being made and delivered. In other words, the economy is humming along. The transports slipping lower could turn out to be an early warning sign that the industrials are in for a bigger drawdown as we approach the summer…

Big banks were one of the best performing sectors during the first phases of the Trump Bump back in November.

But the banks haven’t kept pace with the major averages so far this year. The SPDR S&P Bank ETF topped out alongside transportation stocks in early March. After this week’s drop, it’s threatening to break down to six-month lows… 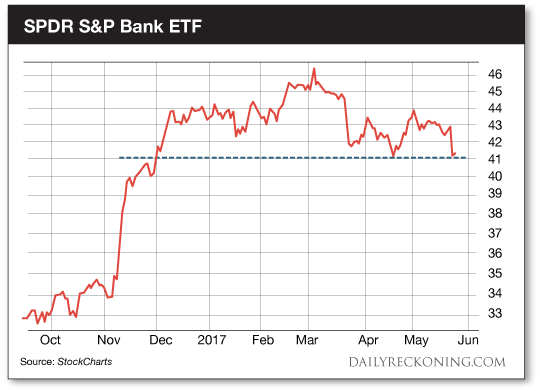 The bank ETF was one of the hardest hit areas of the market on Wednesday, dropping 4%.

“This underperformance was particularly significant because it represents the last bit of Trump Premium that was priced into the sector following the election, based on our analysis,” said Goldman’s John Marshall, via Barron’s.

We’ll be watching these ugly charts in the days and weeks ahead. If they continue to break down, it could lead to more trouble for stocks…