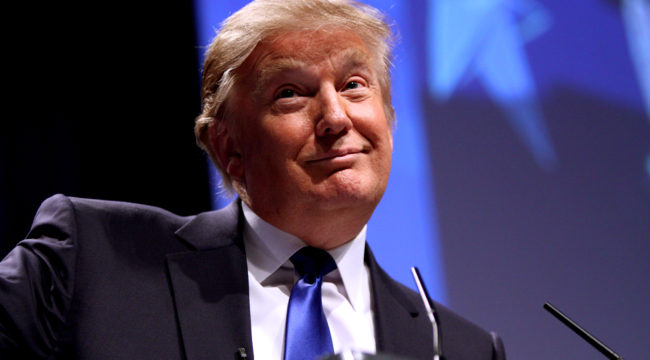 Trump Wins (Even If He Loses)

The list of establishment players exhibiting no interest in associating with The Donald or an absolute animus against him seems to expand by the day.

It includes, of course, Mitt Romney, Jeb Bush, George W. Bush and Lindsey Graham among so many others — key players all in the Republican Party. Romney typically didn’t mince words, saying, “Donald Trump is a phony, a fraud. His promises are as worthless as a degree from Trump University. He’s playing the American public for suckers: he gets a free ride to the White House and all we get is a lousy hat.”

Meanwhile, a troop of prominent Republicans headed for the hills instead of the party’s July convention. Republican congressmen have been vocal in their opposition; leading conservative brass has done everything but openly endorse Hillary. A former Republican national security adviser and a former Republican treasury secretary (and former Goldman Sachs chairman and CEO) have thrown their support to Hillary. And the establishment cast of characters thinking about heading for the exits continues to lengthen.

If much of the rest of the establishment follows the present pattern and departs Trump Station, what will this election look like? If history is any guide, a candidate needs a party establishment for everything from experience to organization to money.

Trump himself lacks experience in government or public service of any sort. He’s essentially at sea when it comes to what it might mean to govern this country.  In this, he is anything but typical among Republican frontrunners who became president. William Taft was a former secretary of war. Herbert Hoover was secretary of commerce.

Warren Harding was a senator. Calvin Coolidge was his vice president. Dwight Eisenhower was a decorated general. Richard Nixon was his vice president and had been in Congress for years. Ronald Reagan was, yes, an actor, but had also been the governor of California. George H.W. Bush had been a congressman, an ambassador, and director of the CIA. His son was, of course, governor of Texas.

If Trump continues to play the outsider card (as he essentially must, given what his supporters now expect) and continues to alienate ever more of the establishment, he’s likely to find himself fighting a battle of diminishing returns in his own party over the next few months. And what about that establishment’s money? After all, what’s an election these days but a pile of donated money and backroom deals?

We know he raised significantly less than Jeb, Ted, and Marco and still beat them in the primaries, and that undoubtedly gave him a certain unrealistic sense of what was possible in a presidential campaign. The result: this May his campaign raised only $1.3 million to Hillary’s $42.5 million. Trump did raise $82 million last month, not far from Hillary’s $90 million. But he’s got a lot of work to do.

Unsurprisingly, establishment pockets are looking a good deal less deep these days when it comes to him. Key establishment money-raising figures have visibly turned their backs on him, just as he did on them.

The Koch brothers are not atypical in refocusing the future contributions of their Super PACs on Republican races in the Senate and House. Charles Koch even signaled the possibility, however faint, of taking a further step and using his money for the other side. “We would have to believe [Hillary’s] actions would be quite different than her rhetoric. Let me put it that way,” he said in an interview on ABC’s This Week. When asked if it was possible that another Clinton could be better than a Republican, he added, “It’s possible.” (With establishment money, all things are possible.)

Outside groups — PACs and Super PACs on both sides of the aisle — have already spent a combined $34.1 million on Senate and House races, according to a Bloomberg News analysis of Federal Election Commission data. That’s nearly double the amount spent at this point in the 2012 campaign. The Freedom Partners Action Fund Super PAC, a political arm of the Koch empire, has divided nearly $10 million among four key Senate races in Wisconsin, Nevada, Pennsylvania, and Ohio. It has, however, kicked in only $36,000 for anti-Hillary efforts and not a penny for Trump.

American Crossroads, a Karl Rove Super PAC, is also opting to focus on Republicans in the Senate, though it has doled out just $100,000 for that effort and $135,000 against Hillary. Rove has called Trump “a petty man consumed by resentment and bitterness,” which tells you all you need to know about where he’s likely to put his outfit’s money this election season.

These power brokers don’t suffer the slings and arrows of  “outsider” scorn lightly.

But now, with the general election less than three months away, it turns out that Trump’s going to need that establishment if he is to have a hope in hell of raising the money and organizing the troops effectively enough to be elected. He needs the establishment more than he’d publicly admit, even with all his wealth.

One thing is guaranteed: Donald Trump will not pony up a few hundred million dollars from his own stash. He did personally contribute $2 million to his campaign last month. But that’s a drop in the bucket. As a result, despite claims that he would never do so, he finally took a Super PAC or two on board and is now pursuing more financial aid even from people who don’t like him.

To be sure, some establishment billionaires have expressed support for Trump, like funding kingpin Sheldon Adelson who said he’d fork over $100 million to the Trump cause. It’s just that he hasn’t done that yet. Chris Christie similarly tried to help raise funds for the campaign. But the man-who-would-have-been-veep didn’t have much luck. So far, at least, Trump’s biggest establishment supporters have been more talk than action.

With the election less than three months away, we’ll see if anything actually changes.

It’s increasingly clear that the GOP establishment is playing a different end game than The Donald. Whether Trump or Hillary wins, they want a Congress stacked in favor of their needs, and perhaps many of them are looking to a Paul Ryan run in 2020 as their saving grace.

But here’s a question that not many people are asking: Can Donald Trump actually lose the 2016 election? Let’s say Hillary beats him, as the polls of the moment suggest she will. Has he lost? Probably not.

After all, he’s brought his brand to a far broader global audience on a stage so much larger than any Apprentice imaginable. He could lose dramatically, blame the Republican establishment for being mean to him, and then expand the Trump brand into new realms, places like Russia, where he’s long craved an opening.

Vladimir Putin and he could golf together bare-chested while discussing the imminent demise of the American empire. “My country could have been great again,” he could sigh, “if only it had voted me in.” His consolation prize: a Trump Casino in Moscow’s Red Square?

In other words, whether the establishment supports him or not, whether he wins on November 8th or not, his brand wins, which means that he triumphs.